Securitization for sustainability: Does it help achieve the Sustainable Development Goals?

Sustainable Infrastructure: Aligning with Rights and the SDGs 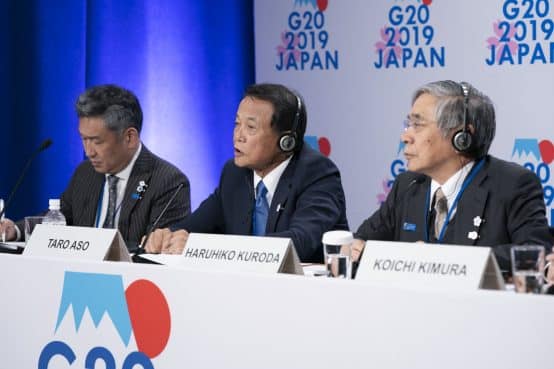 On 17-18 October, G20 finance ministers and central bank governors met for the last time under Japan’s G20 presidency. However, reflecting the continued inability of G20 member countries to be on the same page on key issues facing the bloc, the group once again failed to produce a joint communique text, with Japanese officials instead holding a press briefing following the conclusion of the meetings on 18 October. “Unfortunately, we didn’t have a communique, so this press release will be rather long,” Taro Aso, Japan’s Deputy Prime Minister and Finance Minister, remarked wryly at the start of his prepared comments.

Minister Aso noted that G20 members had discussed the current global macroeconomic outlook, saying, “We broadly agreed that the global economic expansion continues, but its pace remains weak. The global growth is projected to pick up towards 2020, supported by more accommodative financial conditions, coupled with stabilisation in some stressed emerging market economies. But, of course, the projection is based on the assumption that the impact of trade tensions is not materially detrimental to the global economy. The balance of risk remains tilted to the downside, in particular [with respect to] a further escalation of further trade and geopolitical tensions, as well as related uncertainties.” Aso added, “We affirmed that all policy tools should be used to achieve a strong, stable, balanced and inclusive growth.”

He also noted that the G20’s ‘infrastructure as an asset class’ paradigm, which the bloc had previously identified as a new engine for global growth, remains a G20 priority. “We look forward to further work to advance the implementation of the G20 principles for Quality Infrastructure Investment (QII),” he remarked. The QII principles were approved by G20 leaders at the Osaka G20 summit at the end of June. After initial concerns that the draft framework for QII was largely divorced from the low-carbon transition mandated by the Paris Climate Agreement (see Dispatch Spring 2019), the final version of the principles did include some language on this, noting, “Infrastructure projects should align with national strategies and nationally determined contributions [to the Paris Agreement] for those countries determined to implement them, and with transitioning to long-term low emissions strategies.” However, as the dearth of G20 countries on the podium at September’s UN Climate Summit announcing bold new decarbonisation policies showed, the bloc remains a relative laggard on climate issues, as illustrated by, for example, G20 countries’ continued large fossil fuel subsidies.

Minister Aso also remarked that the G20 made progress on discussions around international cooperation on tax issues. “On international taxation, we welcomed recent progress, including the OECD Secretariat’s effort for the proposed unified approach,” Minister Aso said. “We reaffirmed our full support for a consensus-based solution… by 2020.” The OECD will provide a further update when the G20 next meets in February 2020, under Saudi Arabia’s G20 presidency, Minister Aso added. As reported by the Financial Times, the OECD proposal has suggested discontinuing the practice of “taxing profits according to the physical presence of a company in a jurisdiction,” and moving to a system that gives countries, “greater taxing rights depending on where sales are located.”

The G20 also addressed the issue of ‘stablecoins’ (cryptocurrencies pegged to an external reference, such as Facebook’s proposed Libra currency) for the first time, with Minister Aso noting, “We agreed to ask the IMF to examine… the macroeconomic issues [of stablecoins] in member countries.” He added, “We agreed that global stablecoins, and other similar arrangements with potential systemic footprints, give rise to serious public policy and regulatory risks,” including money laundering, illicit finance, and consumer protection – and that these should be resolved before their issuance is allowed.

Minister Aso also briefly alluded to other issues discussed during the G20’s meeting, including debt issues – revealing, “We expect further… discussions by both borrowers and creditors, public and private” – and market fragmentation, noting that the G20 welcomed the continued work of the Financial Stability Board in this area. He also highlighted the G20’s continued efforts around the Compact with Africa initiative, which has an upcoming Africa Investment Forum in Gauteng, South Africa, on 11-13 November.

As a new working paper from the US office of civil society organisation Heinrich Böll Stiftung argues, efforts such as the Compact with Africa that seek to crowd the private sector into development finance are part of an emerging “Wall Street Consensus”, that re-imagines developing states as de-risking actors for private finance. Although they aren’t united enough to issue a communique, G20 countries seem to all be singing from the same hymn sheet when it comes to this agenda, even as civil society continues to raise the alarm about the potential risks of this approach to development finance (see Observer Summer 2017).

Securitization for sustainability: Does it help achieve the Sustainable Development Goals?

Sustainable Infrastructure: Aligning with Rights and the SDGs