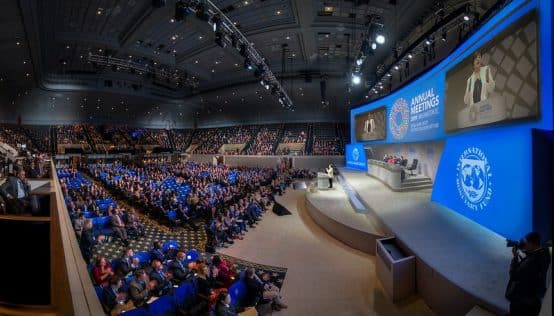 The communiqué of the Intergovernmental Group of Twenty-Four on International Monetary Affairs and Development (G24) for the 2019 Annual Meetings of the IMF and World Bank was released on 17 October in Washington DC.

The communiqué began by echoing concerns raised by the IMF’s lasted World Economic Outlook report that, “Global growth is forecast at 3.0 percent for 2019, its lowest level since 2008–09 and a 0.3 percentage point downgrade from the April 2019 World Economic Outlook.” Moreover, the UN Conference on Trade and Development’s (UNCTAD) 2019 Trade and Development report cautioned that “the bigger story a decade after the G20 stepped in to contain panic in markets and salvage a battered financial system, is that growth has failed to find a firm footing,” adding that, “There is a good deal of speculation that recessionary winds will blow the advanced economies, and with them the global economy, off course in 2020.”

In line with these concerns, the G24 gave substantial attention to global tensions in the world’s trade regime and their implications noting, “The erosion of trust in the trading system and reliance on bargaining strength could … take a toll on growth prospects of developing countries.” In a cautionary note on the threats to the multilateral system, the communiqué added, “It is critical for countries to take the necessary actions to foster a modern, rules-based, open, non-discriminatory and equitable trading system, with the World Trade Organization at its center.”

Connecting the headwinds faced by the global economy to mounting stresses on international economic governance, the G24 reiterated its frustration at the lack of progress on the 15th General Review of Quotas (see G24 Communiqué analysis Spring 2019; Observer Summer 2019). The document stated, “We deeply regret the insufficient support for a quota increase under the 15th General Review of Quotas (GRQ), and highlight the urgency of reaching a rapid agreement on a package, including the New Arrangements to Borrow, that will maintain the current level of Fund resources.” The communiqué stressed that the lack of progress on quota reform and under-representation of emerging market and developing economies (EMDEs) have implications: “All these elements are critical to the legitimacy and effectiveness of the IMF.” It called for the, “completion of the 2010 reforms on Board representation, and a third chair for Sub-Saharan Africa to improve the region’s voice and representation without this being at the expense of another EMDE chair” (see BWP briefing Bretton Woods at 75; Observer Summer 2019). Linked to concerns about the Fund’s response capacity and focus, the G24 called for the IMF, “to explore alternative ways to expand global liquidity, including through a more active use of Special Drawing Rights (SDRs) as a reserve asset.” The document also once again called for improved staff diversity and more varied educational institutional background of Bank and Fund staff.

Perhaps with Argentina in mind, the communiqué called on the Fund to better assess the inter-connected impact of its policies, “particularly regarding the management of capital flow volatility” (see Observer Autumn 2019). While no reference is made to Tunisia or Ecuador, the document stressed the need for the IMF to “ensure that its surveillance delivers even handed and balanced assessments of countries’ policy mix, including monetary, fiscal, macroprudential and structural policies” (see Observer Summer 2018). In line with wide-spread concerns about rising debt burdens and the need to ensure ‘shared responsibility’ among borrowers and creditors, the G24 called for, “sustainable and transparent borrowing and lending practices, including timely and market-friendly sovereign debt restructuring when this is necessary.”

The communiqué emphasised the need for urgent action to minimise the impact of the climate crisis. Echoing UNCTAD and Global Development Policy Center’s A New Multilateralism for Shared Prosperity report, which noted that “those who are most vulnerable to climate change… are only responsible for ten percent of individual consumption or ‘lifestyle’ emissions,” the G24 stressed that, “While developing countries have contributed much less … to climate change, extreme weather events triggered by climate change disproportionately affect LICs [low-income countries] and small states.” Under the umbrella of common but differentiated responsibilities, the communiqué stressed the need for developed countries, “to deliver on their commitment to provide new and additional USD100 billion annually by 2020, and further scale up their contributions thereafter, to support developing countries’ efforts in addressing climate change.” Following IMF managing director Kristalina Georgieva’s statement committing the Fund to integrate climate change into its surveillance work, and commenting on the impact of, inter alia, climate change on population movements, the G24 urged, “the IMF and WBG to undertake more analytical work to deepen understanding of the macroeconomic and developmental impacts of migration and refugee flows in source and destination countries.”

While the communiqué does not refer to the dimming prospects of meeting the Sustainable Development Goals, which the UN Development Programme notes most countries are off track to meet, the G24 stressed the need for economic transformation and the social and political risks of continued slow and uneven progress. It also noted the need for the World Bank and other multilateral development banks to, “enhance the effectiveness of its support for country-led and country-owned strategies for job creation and economic transformation.” Given the World Bank’s continued push of its dangerous Maximising Finance for Development approach (see Observer Summer 2017), which privileges private sector financing options in the provision of essential public services such as education, health and water, civil society hopes G24 representatives will heed Professor Daniela Gabor’s recent warnings about the perils of financialising international development, which she has referred to as the “Wall Street consensus.”

Reacting to the increasing focus by donor countries on the need to improve domestic resource mobilisation (DRM), the communiqué called for a robust 19th replenishment of the International Development Association – the World Bank’s low-income lending arm – and cautions that, “Many LICs, including countries in fragile and conflict-affected situations… will not be able to rely solely on DRM to support the additional spending necessary to achieve the SDGs. Thus, it is vital for advanced countries to deliver on their commitment to increase the amount of concessional resources, which have declined for least developed countries since 2013.”

Related to the DRM discussion and the increasing impetus for developing countries to rely on private sector sources of financing and, indeed, privatisation to address falls in levels of concessional resources, the communiqué, underscored that, “[i]nternational tax cooperation is essential to develop rules that are globally fair and avert harmful tax practices and competition.” It added that there is a need for “a multilateral solution [on taxes] that generates equitable benefits for developing countries.” Alluding to the fact that international discussions on tax issues continue to take place at the rich-country OECD group, the communiqué stressed that, “The views of developing countries and sound analyses of the impact of tax reform proposals on their revenues should be central in the reform of these rules.” These concerns are in line with civil society calls for a well-resourced tax body within the United Nations.

Finally, the communiqué noted the need to implement the World Bank’s “Capital and Policy Package so that the WBG works effectively with all client countries and leads on the global public goods agenda,” adding that, “The next Shareholding Review of the WBG, which will take place in 2020, should achieve the objectives of the agreed upon shareholding principles.”