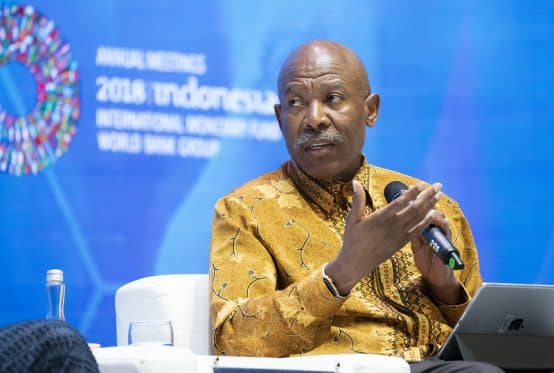 Lesetja Kganyago, Chair of the International Monetary and Financial Committee

Below is an analysis of the Annual Meetings IMFC communiqué, which was issued on 19 October 2019. Mr Lesetja Kganyago, Governor of the South African Reserve Bank, chaired the 40th IMFC meeting, and a full list of attendees can be found here. The International Monetary and Financial Committee is the direction-setting body of finance ministers for the IMF. The communiqué of the IMFC sets out the consensus position about the direction of the Fund and reform. The ministerial statements to the IMFC, often revealing of the true differences of opinion amongst the IMF’s membership, are also made available online. The next meeting will be held in Washington DC, on 18 April 2020.

Echoing concerns raised by IMF managing director Kristalina Georgieva that the global economy is undergoing a “synchronised slowdown”, combined with the World Economic Outlook’s (WEO) lowering of global growth forecasts in what the G24 described as a “subdued” economy (see Dispatch, Annual Meetings 2019), the IMFC communique noted that “the outlook is highly uncertain and subject to elevated downside risks”, listing potential hazards such as trade tensions, policy uncertainty, and rising debt levels.

Along with calling for a strong international trading system, appropriate policy tools, financial sector reforms and a fair digital tax system, the IMFC stated that in order to enhance efforts to reduce policy uncertainty and strengthen international frameworks and cooperation, it will “continue to work together to enhance debt transparency and sustainable financing practices by both debtors and creditors, public and private; and strengthen creditor coordination in debt restructuring situations.”

While the IMF has been quick to point to the looming debt crisis as a significant concern, self-reflection surrounding its own role in contributing to unsustainable debt is lacking. A report issued in the run-up to Annual Meetings by UK-based civil society organisation (CSO) Jubilee Debt Campaign UK revealed that IMF has spent $93 billion bailing out reckless lenders, and argued that by issuing loans to high debt countries without debt restructuring taking place, the Fund is effectively incentivising lenders to act recklessly and creating moral hazard. Over half of the $93 billion is in Argentina alone, which fell into a selective default in August, after debt restructuring was not considered – despite the IMF acknowledging that the country’s debt sustainability was not probable – and following an estimated $36.6 billion of $44.5 billion of the initial loan leaving the country in capital outflows, reigniting calls for the creation of a fully independent debt workout mechanism (see Observer Autumn 2019).

IMF operations: Can the Fund break from austerity?

In response to concerns surrounding excessive global imbalances, the IMFC stated it would employ “appropriate policy tools, individually and collectively, to mitigate risks, enhance resilience, and shore up growth to benefit all.”

While the communique called for “policies to foster inclusion and expand opportunities” and stated that it supports the provision of analysis and advice to help countries achieve the Sustainable Development Goals (SDGs), accusations have been made by civil society that the Fund’s austerity-centric approach to economic crises management is incompatible with an inclusive economy consistent with the the achievement of the SDGs. Kate Donald from the US-based CSO Centre for Economic and Social Rights noted that, “rather than seizing a much-needed opportunity to question and realign its practices and priorities based on the SDGs, the IMF is instead merely using the SDGs as a public relations exercise to justify what it is already doing, no matter how incompatible this may be with truly equitable sustainable development” (see Observer Spring 2019). Moreover, calls for inclusive growth may have fallen on deaf ears, as the Annual Meetings coincided with widespread civil unrest in Ecuador, following IMF-supported austerity, fuel prices hikes, and the undermining of workers’ rights, resulting in Ecuador repealing of some IMF conditionality measures and inspiring a declaration from Latin American-based CSO Latindadd calling on the Fund “to change its austerity policies” so that countries can “ have access to financing with sovereignty in economic policies, where the State guarantees human and civil rights” (see Observer Autumn 2019).

On future work, the committee noted its support for the IMF’s upcoming areas of work such as: Reconsidering elements of the lending toolkit and deepening collaboration with regional financing arrangements; implications of fintech; continued assistance for resilience-building in countries vulnerable to natural disasters; the 2020 Comprehensive Surveillance Review; the Financial Sector Assessment Program review; forthcoming reviews of Data Standards Initiatives and data provision to the Fund; the implementation of the overarching strategy on data and statistics; the human resources strategy; and continued efforts to integrate capacity development with surveillance and lending.

The communique furthermore called on the IMF to “continue incorporating the recommendations of the reviews of program design and conditionality and of concessional facilities to improve program design and outcomes in recipient countries,” and to, “make progress toward the 2020 diversity benchmarks”, noting their support for increasing gender diversity in the Executive Board.

The communique noted, “We reaffirm our commitment to a strong, quota-based, and adequately resourced IMF to preserve its role at the center of the global financial safety net”, adding, “We note the lack of progress on a quota increase under the 15th Review.” It stated it was, “committed to revisiting the adequacy of quotas and continuing the process of IMF governance reform under the 16th General Review of Quotas, including a new quota formula as a guide.”

The IMFC did not, however, state its support for a redistribution of voting rights, signalling a change from previous years such as the October 2018 IMFC communiqué, which called explicitly for “increased shares for dynamic economies in line with their relative positions in the world economy and hence likely in the share of emerging market and developing countries as a whole, while protecting the voice and representation of the poorest members.”

Indeed, the 15th Review of Quotas was the elephant in the room at the Annual Meetings, as the long-awaited, delayed outcome was due to be published by the October meetings at the latest. However, despite widespread support from IMF member states, the US Treasury unilaterally blocked the redistribution of vote shares, leading to fresh questions around the continued US dominance at the IMF (see Observer Summer 2019).