Opinion: How the World Bank can save the world’s forests 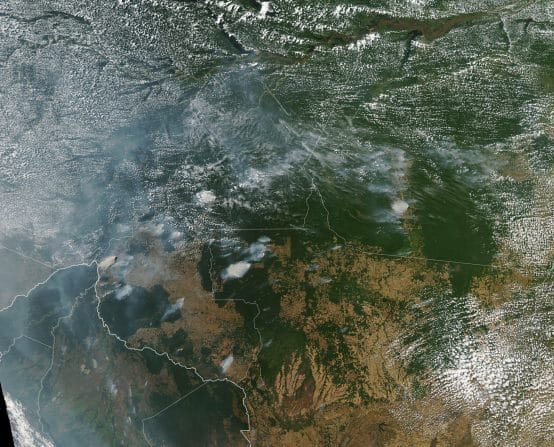 In late August, with forest fires raging on a historic scale in the Brazilian Amazon, the gap between the rhetoric and reality of the World Bank Group’s (WBG) approach to forests was exposed in little over 24 hours.

Tweeting from the Group of Seven (G7) Summit in Biarritz, France, on 26 August, WBG President David Malpass noted, “I was…glad to see that the Amazon fires are a key priority for @G7 attendees & I share in their concerns. The @WorldBank Group is ready to work with our partner governments at all levels to scale up activities to protect forests & support sustainable development.” Malpass was referring to a $22 million aid package announced at the G7 to help fight the fires in the Amazon – which was ultimately declined by Brazil’s far-right president Jair Bolsonaro.

On 27 August, meanwhile, online news site The Intercept published a story linking major donors to US President Donald Trump to accelerated deforestation in the Amazon and exposing the role that the International Finance Corporation (IFC), the World Bank’s private sector investment arm, is playing in this process.

In 2015, IFC made a $30 million equity investment in Hidrovias do Brasil, a company which – The Intercept article notes – operates a “shipping terminal at Miritituba, deep in… the Brazilian state of Pará”. This port is a critical cog of a wider transport corridor in the Brazilian Amazon that has been recently developed to export soybeans – and has resulted in accelerated deforestation, according to The Intercept‘s expose. According to Brazilian news outlet Exame, IFC’s 2015 investment was part of a larger fundraising effort by Hidrovias do Brasil, 80 per cent of which was invested in the Tapajós-Amazonas river corridor between the city of Miritituba and the port of Vila do Conde, in Pará. The Intercept article added that the IFC’s own Environment and Social Review had identified deforestation as a risk of the investment: “the construction of the Miritituba port, close to still-intact areas of the Amazon forest, is likely to… accelerate conversion of natural habitats into agricultural areas, particularly for soy production.”

The Amazon fires – many of which were set by opportunistic farmers to clear land for farming and ranching – unfolded in the wake of the publication of the Intergovernmental Panel on Climate Change’s (IPCC) Special Report on Climate Change and Land on 8 August. The report laid bare the importance of the Amazon and other forests in the fight against climate change – and in preserving vital natural ecosystems more generally. As noted by online news site Carbon Brief’s summary of the IPCC report’s findings, “The largest source of CO₂ losses [associated with land] from 2007-16 was tropical deforestation.” A separate study from the World Resources Institute in 2018 found tropical deforestation in the three years prior to the study was 63 per cent higher than in the preceding 14 years, and noted, “If tropical deforestation were a country, it would rank third in carbon dioxide-equivalent emissions, only behind China and the [US].”

IFC’s investment in Hidrovias do Brasil is not an outlier. As lawyer and writer Bruce Rich pointed out in his 2013 critique, Foreclosing the Future: The World Bank and the Politics of Environmental Destruction, despite the continued evolution of the Bank’s environmental and social standards, the net impact of many Bank projects continues to be the destruction of biodiversity hotpots.

Rich highlighted a 2011 report from the Bank’s Independent Evaluation Group, which was commissioned by then-Bank president Robert Zoellick to investigate the impact of 20 World Bank projects between 1994-2004 on tiger habitats in Asian countries, following the Bank’s support for a high-profile ‘tiger summit’ in St Petersburg in 2010. Rich writes, “The… study found that three-quarters of the projects…directly threatened tiger habitats; and two-thirds also created, or were exposed to, indirect threats. … Bank funded projects were harming tiger habitats despite existing environmental policies, which appeared in many cases to be ignored. Even more significantly, the Bank’s policies – even when followed – could not protect against the major causes of environmental destruction.”

A recent op-ed by Ladd Connell from US-based civil society organisation (CSO) Bank Information Center in development news site Devex shows that little has changed: Despite the creation of the Bank’s Forest Action Plan, which covers 2016-2020, “Current projects in Indonesia, Democratic Republic of the Congo, Liberia, and Brazil seem poised to drive deforestation.”

A letter signed by 77 CSOs in November 2017 called for the Bank to take steps to better prioritise forests and the rights of forest peoples in its lending, and to make its country Forest Notes – which are supposed to articulate the nexus between Bank lending and borrower countries’ forest resources – open to consultation (see Observer Winter 2017-2018).

Opinion: How the World Bank can save the world’s forests