IMF will include climate in country analysis, Georgieva says 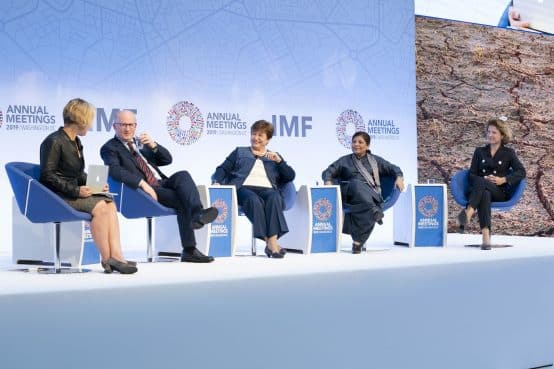 Shortly after being appointed as the IMF’s new managing director in late September, Kristalina Georgieva made clear that tackling climate risk would be a key part of the Fund’s mandate during her tenure (see Dispatch Annuals 2019; Observer Autumn 2019).

At a 2019 IMF Annual Meetings panel in October on how central banks can combat climate change, Georgieva said, according to US-based news outlet Bloomberg, that the Fund, “is gearing up very rapidly to integrate climate risks in our surveillance work.” Georgieva, however, was more tentative about exactly what the Fund’s role will be: She noted that while conducting climate ‘stress tests’ to try to gauge risks in countries or sectors is a less contentious step the Fund could take, other measures, such as developing a taxonomy of sustainable financial assets, could be seen as more divisive. Efforts by the European Union to create a taxonomy of ‘green’ financial products this year were subject to intense negotiations after some EU member states objected that these changes would damage their national industries.

The Fund has also made several calls in the past year for countries to adopt more ambitious carbon taxes, most recently in its Fiscal Monitor published in October, arguing that this is the most ‘efficient’ way for countries to implement the Paris Climate Agreement, despite skepticism from climate justice advocates about whether focusing on this particular policy is politically viable (see Observer Summer 2019).

An ambitious transition to low-carbon...will not take place via the market because of a series of market failures that include incompatible time horizons between private finance and climate crisisFinance and Climate Change: A progressive green finance approach for the UK

Commenting at a Civil Society Policy Forum event during the 2019 Annual Meetings that explored the IMF’s role in helping countries tackle climate risks, Signe Krogstrup of Denmark’s central bank remarked, “I think that there is still a discussion about what should the IMF be doing on climate change. … Macro-stability is the clear focus of IMF. So, the question is: Is climate macro-critical for the Fund, and should it be doing more? Climate is potentially macro-critical in at least two ways: disaster risks, where countries’ macroeconomic prospects are negatively affected by climate impacts; and transition risks, where the shift to a low-carbon economy may cause a change in asset valuations.”

As the IMF and central banks test waters on greening finance, creating monetary policy in the public interest is vital

The IMF’s shift to analysis of climate risks comes as central banks are increasingly seeking to tackle the issue. In 2018, Bank of England governor Mark Carney warned that an unmanaged transition to a low-carbon economy could result in the sudden collapse of assets linked to fossil fuels, which he dubbed “a climate Minsky moment” (see Observer Summer 2019). The Network for Greening the Financial System now includes over 51 members, the majority of whom are central banks, which are working on joint analysis of climate risks. The US’s imminent withdrawal from the Paris Agreement under the Trump Administration notwithstanding, US Federal Reserve governor Lael Brainard noted in November that, “To fulfil our core responsibilities, it will be important… to study the implications of climate change for the economy and the financial system and to adapt our work accordingly.”

A recent paper commissioned by the UK’s Labour Party, entitled Finance and Climate Change: A progressive green finance approach for the UK, and published in November, highlighted the need for the creation of robust macroeconomic policies, rather than relying on private finance-led approaches. It noted, “an ambitious transition to low-carbon [sic] will not take place via the market because of a series of market failures that include incompatible time horizons between private finance and climate crisis, incomplete capital markets, corporate market power, and subjective private classifications of green assets.” In addition to the creation of a robust green public taxonomy – which identifies assets well-aligned with a low-carbon transition – the paper called for mandatory disclosure of climate risks, and the greening of the Bank of England’s macroeconomic policies, including how this applies to its commitment to quantitative easing through investing in corporate debt.

Civil society will be watching closely to see whether the Fund recommends that countries develop such robust policies, or whether it continues to support more ‘market-driven’ approaches to tackling climate risks.

IMF will include climate in country analysis, Georgieva says