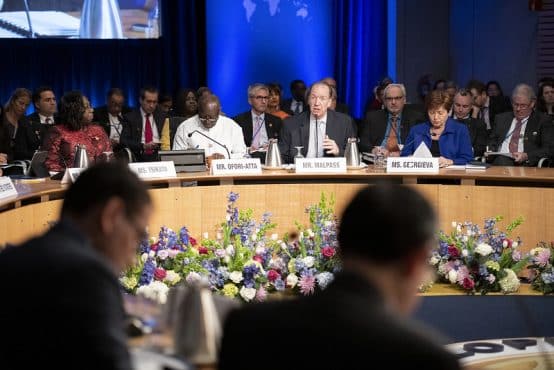 Reflecting the torturous G20 negotiations on the Covid-19 response and concerns about the Bank and Fund’s ability to deal effectively with contentious geopolitical issues (see Dispatch Spring 2020), the communiqué began by highlighting the need for a coordinated multilateral response and underscored the pandemic has “the potential to erase development gains for many countries”. In an apparent reference to the US decision to suspend funding to the World Health Organization (WHO), the document encouraged World Bank and IMF coordination with the WHO and other UN agencies and stressed that “countries [should] ensure the flow of vital medical supplies, critical agricultural products, and other goods and services across borders.” The call for international cooperation echoed a more forceful statement by the UN High Commissioner for Human Rights in April, calling Covid-19 a “colossal test of leadership” that requires coordinated action.

The Development Committee called upon the “WBG to help governments deploy resources toward public health interventions, nutrition, education, essential services, and social protection against the immediate adverse effects of the shocks”, stressing that special attention is required to “fragile situations, small island states, and the poorest and vulnerable people in all countries, with attention to gender issues.”

While these calls are welcome, Bank and Fund watchers and those who have suffered the consequences of their policies on public sector service provision and social protection, will have noted with concern the document’s reference to the World Bank’s support of “structural reforms that lay the foundations for growth and higher living standards for all”, without reference to the need for a radical departure from previous approaches that have exacerbated intersectional inequalities.

The document underscored that the WBG and the International Finance Corporation (IFC), the Bank’s private sector arm, are well-resourced after the recent capital increases to the International Bank for Reconstruction and Development (the Bank’s middle-income lending arm), the IFC and the 19th replenishment of the International Development Association (the Bank’s low-income lending arm), and noted that the WBG has an estimated $150 – $160 billion in resources for the next 15 months. The Committee was however silent on how the Bank is expected to navigate the tension between the need for quick disbursement and careful project selection and due diligence, particularly in an environment increasingly hostile to civil society organisations and human rights defenders. It also failed to comment on how the IFC should handle its investments in private health providers, which entrench inequalities in access to essential services (see Observer Summer 2019, Summer 2018).

The communiqué welcomed the “IMF’s stepping up of financial support for developing countries through both its regular facilities and emergency funding.” Ignoring the US’s blockage of an increase to the Fund’s resources through the IMF’s Special Drawing Rights (see Dispatch Springs 2020; Observer Winter 2019, Summer 2019), the Committee focused instead on the doubling of the Funds’ emergency resources.

The Committee stated its support for the Bank’s support to IDA countries and “welcomed the coordinated approach agreed by the G20 and the Paris Club, supported by the WBG and IMF, toward a time-bound suspension by bilateral official creditors of debt service payments for the poorest countries that request forbearance.” To some extent addressing a concern raised by over 200 civil society organisations in a statement in relation to debt relief by international financial institutions, the Committee stated, “we ask the World Bank to further explore options for the suspension of debt service payments over the suspension period, while maintaining financial capacity, current rating, and low cost of funding.” Recognising that responses will also challenge middle income countries already facing problematic debt burdens, the communiqué requested that the Bank and Fund “explore expeditiously a range of solutions to fiscal and debt stress in [middle-income] countries on a case-by-case basis.”

While the Committee presented the G20’s debt standstill decision as evidence of impressive multilateral cooperation, Jesse Griffiths of UK-based think-tank the Overseas Development Institute noted in  a Devex article that, “The G-20 debt decision merely pushes the can down the road — it hasn’t canceled repayments and countries will just owe the money later, and will continue to pay interest — and it only applies to a limited number of countries.” Noting that the IMF’s gold reserves have increased in value by $19.3 billion since the beginning of the Covid-19 pandemic and stressing that “this is equivalent to more than the total debt ($12.4 billion) owed this year by the poorest countries to multilateral institutions like the IMF and World Bank”, Oxfam has called for a sale of the reserves to fund a debt cancellation rather than a stand-still. While the Committee called for the private sector to follow suit on debt payments this year, concerns remain that the process remains voluntary.

On climate and energy, the Committee stressed that the Bank must “support long-term development priorities; ensuring affordable energy access, building energy security and resilience to economic and environmental vulnerabilities and climate change.” References to a just transition were however conspicuous by their absence. While the communiqué refers to ensuring affordable energy access, it lacks references to the urgency of ensuring any response is integrated within a Global Green New Deal framework and is aligned with the Paris Agreement’s 1.5o C target. As noted by an April article in Thomson Reuters Foundation news website by Jean Su of the Center for Biological Diversity and Tasneem Essop of Climate Action Network International, the early trends of the Covid-19 response are not promising and indicate that the frantic race to revive economic activity post-emergency may well lead to actions that contradict urgently required climate action.

While the communiqué reflected some important steps in the right direction, it nonetheless fell very short of the UN Conference on Trade and Development’s call for a $2.5 trillion response, including debt cancellation – rather than suspension of payments,  more robust support for capital control measures and a significant expansion of the Fund’s SDRs, in order to ensure an equitable and effective response. The steps outlined by the Committee therefore, while positive, do not signify the radical restructure of the multilateral system that is so urgently needed.