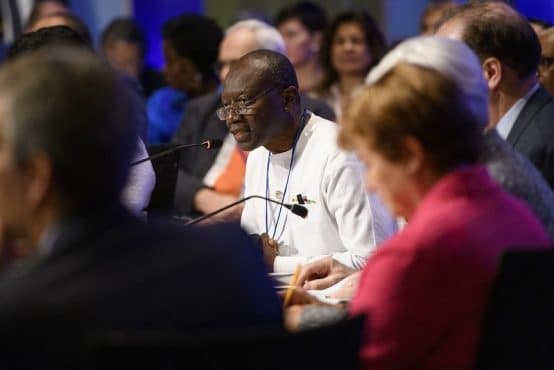 The communiqué of the Intergovernmental Group of Twenty-Four on International Monetary Affairs and Development (G24) for the 2020 Spring Meetings of the IMF and World Bank was released on 14 April, amidst the Covid-19 crisis. The virtual meeting was chaired by Kenneth Ofori-Atta, the Minister of Finance for Ghana.

The communiqué began by highlighting the “unprecedented humanitarian, public health, and economic challenge from the pandemic,” extending sympathies to all families and communities affected. The group raised concerns about the humanitarian impact in many emerging markets and developing countries (EDMCs), with fragile health systems and commodity, trade and tourism-dependent economies facing significant economic shocks.

It noted that G24 countries are responding to the crisis through national policy measures to provide social protection, protect jobs and incomes, maintain financial resilience, and sustain economic activity.

The communiqué called for a “coordinated global response” between the World Health Organization, the International Monetary Fund (IMF), the World Bank Group, and other multilateral development banks, in providing financial and technical assistance to EMDCs and ensuring “unrestricted provision of necessary medical supplies and assistance.” It urged the international community to address “the erosion of our tax bases and revenues needed to sustain our economies and service our debt.”

The G24 welcomed the proposed temporary suspension of debt payments from low-income International Development Association (IDA) the World Bank’s low-income country arm, countries, but went a step further than the G20 communiqué, which was released the following day, by calling for greater support to address debt vulnerabilities in other EMDCs, not just the poorest. It added that some countries may require comprehensive debt restructuring. The G24 requested that private creditors “share the burden of alleviating debt distress”, an ask shared by the G20 and met with resistance from some private creditors.

The communiqué called on the IMF and World Bank to strengthen borrowers’ debt management capacity, including, “as a matter of urgency”, calling on Credit Rating Agencies to avoid downgrading countries that are restructuring their debts. The Bank has thus far refrained from suspending debt payments on its own loans, with its president, David Malpass, underscoring the need to protect the Bank’s financial status and credit rating in remarks to the Development Committee on 17 April.

The G24 commended the IMF and World Bank for their “swift action” in responding to the financing needs of EMDCs, especially the Fund’s doubling of access limits under the Rapid Credit Facility and Rapid Financing Instrument, and the Bank’s announcement of a $160 billion financing package for the next 15 months. The communiqué emphasised, “safeguarding compliance with operational standards” while maintaining a “flexible response” in rapid financing.

However, it stressed that access to the Fund’s emergency facilities must be “truly additional”, and not “constrained by annual access limits”, calling on donors countries to support low-income countries and small vulnerable states by increasing resources for the Fund’s Poverty Reduction and Growth Trust. It also called on the IMF to “accelerate discussions” on a short-term liquidity line instrument to support EMDCs facing staggering rates of capital outflows.

Calls for a rethink of international financial architecture

The G24 emphasised its support for the “IMF’s efforts to rapidly deploy resources and continue discussions on a new SDR [special drawing rights] allocation”, in the face of opposition  from the US on its board (see Dispatch Springs 2020). This call was not echoed by the G20 or International Monetary and Financial Committee (IMFC) communiqués later in the week.

While welcoming the recent doubling of the IMF’s New Arrangements to Borrow and its new round of Bilateral Borrowing Agreements, the G24 reiterated its longstanding frustration over the lack of progress on the Fund’s 15th General Review of Quotas (see Dispatch Annuals 2019; Observer Summer 2019). The group stated, “We continue to underscore the importance of an adequately resourced, quota-based IMF at the center of the Global Financial Safety Net.”

Crucially, the communiqué concluded by stating that this crisis called for a re-examination of the current global financial architecture. It highlighted “the need for an inclusive forum to examine the adequacy of the existing international financial and economic architecture and its ability to respond equitably and rapidly to global crises.”