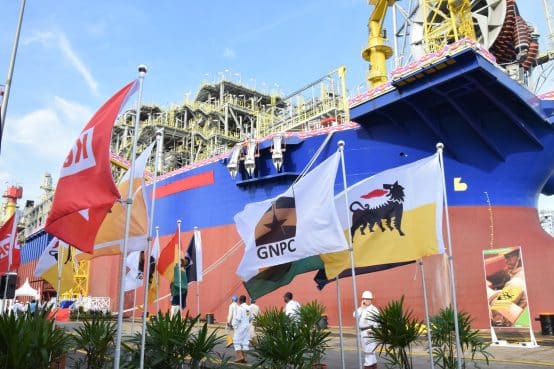 A floating production, storage and offloading vessel for the Sankofa gas project, at its commissioning in 2017 in Signapore. Photo: Eni.

Heralded as the key to Ghana’s energy independence a decade ago, Ghana’s offshore gas is rapidly becoming a fiscal burden amidst its debt crisis, raising questions about the World Bank Group’s (WBG) role in Ghana’s gas development.

In particular, a flagship public-private partnership (PPP) supported by the World Bank in Ghana, the Sankofa offshore gas project — which is backed by a total of $1.2 billion in WBG guarantees and debt financing — is an increasing fiscal burden. Under a ‘take or pay’ clause in the Sankofa contract between Ghana and private sector investors, the Ghana National Petroleum Corporation (GNPC) must purchase 90 per cent of a predetermined quantity of gas produced, whether it is able to use it or not. In 2019, the Ghanaian government’s bill for ‘unused gas’  primarily due to the ‘take or pay’ clause in the Sankofa contract — amounted to $250 million, due to a combination of lack of demand and delays in building associated infrastructure needed to offtake Sankofa’s gas. The terms of the Sankofa contract were criticised by Ghanaian civil society organisation (CSO) the African Centre for Energy Policy (ACEP) as early as 2015 for being unfavourable to Ghana. More generally, CSOs have persistently raised concerns about the risks of the Bank promoting PPPs in developing countries (see Observer Winter 2017-2018). The Bank has announced it will stop providing finance for ‘upstream’ oil and gas projects like Sankofa beginning this year (see Observer Spring 2018).

Ghana’s difficulties come at a time when the energy strategies of developing African states are being hotly debated, with 19 African CSOs, including Kenya-based Power Shift Africa and Pan-African CSO WoMin, releasing a communique during an African Union leaders summit in Ethiopia in February calling on African leaders to, “put an end to fossil fuel development….and rapidly initiate a transition to clean and safe renewable sources of energy that fully supports access to energy for those who currently lack it.”

The fiscal burden of gas in Ghana does not end with the unfavourable terms of the Sankofa contract. A series of power purchase agreements (PPAs) signed with electricity producers in 2015 have put Ghana’s government at a further fiscal disadvantage. As summarised by online media outlet Economist Intelligence Unit, partly in response to temporarily reduced output from hydropower electricity sources (due to low water levels in the country’s dams) and a reduction in gas flows from Nigeria due to unpaid debts, “the government entered long-term power-purchase agreements (PPAs) with private producers in 2015, for a total of some 2,300 MW, on the basis that the capacity would be paid for irrespective of demand. …[Due to supply from PPAs outpacing demand] the exchequer has been left with an annual bill of some US$500m for unused electricity.” All told, due to contract obligations, Ghana is currently paying an eye-watering amount for both unused gas and unused electricity.

These sectoral developments emerged as Ghana’s debt levels reached over 60 per cent of GDP in 2019, with the World Bank stating in January 2020 that the country was at mid-to-high risk of debt distress. The IMF’s 2019 debt sustainability analysis for Ghana explicitly mentioned the gas sector as a fiscal risk to the country, noting, “the off-take agreement for gas supply from the offshore Cape Three Points field [i.e. Sankofa]…requires Ghana to make monthly payments equivalent to 0.7 percent of GDP annually.” To make matters worse, the coronavirus (COVID-19) pandemic is expected to cause a budget shortfall in Ghana this year, due to a decrease in revenues from oil exports and tourism, according to a statement by Ghana’s finance minister in mid-March.

The country entered IMF programmes in 2009-2012 and 2015-2018 following debt issues, which severely impacted social spending. As noted by a 2019 ActionAid International report, “since 2015 [Ghana has] made considerable cuts to public expenditure under its current IMF programme. According to the Ghana SDG Baseline report, government allocations for poverty reduction activities increased progressively from 24.8 per cent in 2013 to 28 per cent in 2015, but then fell to 19.4 per cent in 2016.” In a working paper published in January, UK-based CSO Jubilee Debt Campaign found that Ghana was among the heavily-indebted countries that reduced real public spending person between 2016 and 2019 compared to 2015.

Meanwhile, Ghana’s gas infrastructure development is contributing to a net rise in Ghana’s energy sector emissions. While gas investments have been justified by the World Bank and other supporters as a ‘bridge fuel’ to more sustainable energy use, excluding hydropower, renewable energy sources remained less than 1 per cent of Ghana’s energy mix in 2019.

It would be difficult to overstate the Bank’s importance in facilitating Ghana’s gas infrastructure expansion in recent years. As the Bank noted in the 2018 project appraisal document for a $20 million technical assistance loan, the WBG “has about US$2 billion of exposure in Ghana’s energy sector,” almost exclusively linked to the country’s oil and gas infrastructure.

The Bank is also an investor in the 550 MW Takoradi 2 and 3 gas power plant in Ghana, which processes gas from Sankofa, with IFC providing $140 million in loans, and MIGA chipping in with a $88 million guarantee. Additionally, IFC provided $265 million in debt financing to investors in Ghana’s Jubilee oil field (see Update 65), and IDA also previously provided a $50 million partial risk guarantee for the West African Gas Pipeline, which brings Nigerian gas to Ghana.

Moreover, the London-based Private Infrastructure Development Group (PIDG), which is supported by donor funding from the UK and other European governments, as well as the IFC, has provided a number of loans and guarantees to support the construction of Ghana’s new generation of gas-fired power plants, including $45 million in loans for Takoradi 2 & 3 (see here and here), $126 million in guarantees for the 400 MW Bridge Power gas plant in Tema in 2016 and 2017, and $33 million in loans for the Kpone power plant in 2005 and 2014.

Given the Bank’s widespread exposure to Ghana’s gas infrastructure lock-in, it is little surprise that the above-mentioned 2018 technical assistance programme was largely preoccupied with issues related to the gas sector, including a strategy for “balancing gas demand and supply.” Efforts to support renewable energy were limited to a feasibility study of potential off-grid energy sources in the country.