The Reflection Group on the 2030 Agenda for Sustainable Development 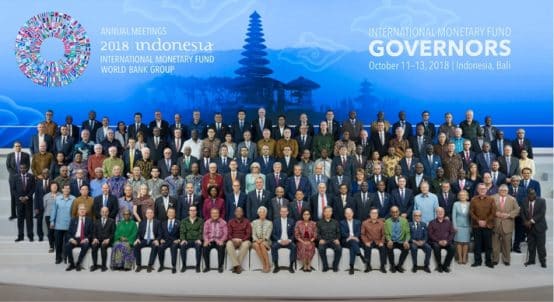 This Inside the Institutions looks at decision-making and governance structures at the IMF and World Bank. It includes a variety of critical civil society perspectives on the structural under-representation of developing countries and built-in corporate biases.

Decision-making at the IMF

Although board discussions are generally not published and thus the positions of individual board members not disclosed, decision-making on the executive board is typically made through consensus with voting kept to a minimum. Votes on substantive issues need 85 per cent approval, granting the US (with its 16.52 per cent vote share) effective veto power over any major decisions.

The IMF describes itself as a “quota-based institution”, meaning each of its members is assigned a quota when they join, which determines three specific things: 1) the amount of financing it provides to the IMF; 2) the amount it can borrow from the IMF, although exceptions can be made; and 3) its voting power on the board. This has often been referred to as a ‘one-dollar, one-vote system’.

The assignment of quotas is determined by a specific quota formula, broadly based on a country’s relative position in the global economy. The current formula consists of four elements: GDP (50 per cent), ‘openness’ (30 per cent), economic variability (15 per cent) and international reserves (5 per cent). Quotas are denominated in Special Drawing Rights (SDR), the IMF’s international reserve asset. The value of the SDR is based on a basket of five currencies — the U.S. dollar, the euro, the Chinese renminbi — from 2016, the Japanese yen, and the British pound sterling (see Observer Winter 2016). Historically, civil society has demanded a number of reforms in relation to IMF and World Bank vote shares, including the introduction of double majority voting, where major decisions require both shareholder and member state majorities, thus giving developing countries a larger part in decision-making (see At Issue, Double majority decision making at the IMF Implementing effective board voting reform).

The IMF is required by its Articles of Agreement to review its quotas every five years, so that the distribution of vote shares is adjusted to the evolving economic weight of the member states. Quota reviews address two main issues: 1) the size of an overall increase in quotas, meaning the size of the IMF’s financial lending power; and 2) the distribution of the increase among members.

In February 2020, the 15th IMF quota review was officially abandoned, after the US “failed to see the need for a quota increase” that would have likely redistributed vote shares in favour of China. Instead, it opted to increase financing to the Fund’s New Arrangements to Borrow, designed as a backstop to the Fund’s quota-based financing mechanism, undermining the notion the IMF is a quota-based institution (see Observer Summer 2019).

Similarly to the IMF, member countries are allocated votes at the time of membership and subsequently for additional subscriptions of capital. While votes are allocated differently in each organisation, the five largest shareholders across the World Bank Group are the US, Japan, Germany, France and China. Seven of the 25 ED constituencies are made up of one member (the five biggest shareholders, as well as the UK and Saudi Arabia), whereas Sub-Saharan Africa is divided into three constituencies, and many Asian constituencies are crowded, for example, in comparison to European counterparts.

In 2010, Governors agreed a set of reforms meant to enhance the voice and participation of Developing and Transition Countries (DTC) in the World Bank Group, notably through an increase in voting power, and realigned shareholding in line with economic weight and development contributions. In 2018, a General Capital Increase was agreed for IBRD and IFC, resulting in the continued dominance of high-income countries over both institutions and the US and EU member states retaining an effective veto over major decisions at the IBRD. The replenishment of IDA in 2019 has maintained the US, Japan and the UK as the largest shareholders respectively.

While some of these reforms have resulted in improved representation for China, civil society calls have long been made for a reallocation of board seats and votes to ensure that all member countries are fairly able to represent themselves and that creditor and borrower countries have an equal allocation of voting shares. Proposals have also been made for having no more than ten countries per ED constituency, and for a rotation of board members among different countries in any given constituency (see Observer Winter 2018, Update 33).

A shareholding review for the World Bank Group is planned to take place in 2020.

The International Centre for Settlement of Investments Disputes (ICSID) provides facilities for conciliation and arbitration of international investment disputes. It is governed by the ICSID Administrative Council, which is made up of one representative of each of its 162 members states. Each member state has one vote on the Administrative Council and there is no weighted voting on any matter. Its main functions include passing rules of procedure for ICSID cases, adopting administrative and financial regulations for the Centre, and electing the ICSID Secretary-General. It plays no role in the administration of individual cases.

The president of the World Bank Group, David Malpass, is the chairman of the Administrative Council. Functions of this role include designating ten individuals to each of the ICSID Panels of Arbitrators and of Conciliators, constituting conciliation commissions and arbitral tribunals in certain circumstances, appointing ad hoc committees for annulment proceedings, and deciding proposals to disqualify a sole arbitrator, a majority of a tribunal, or a single member of a tribunal or commission.

The historic World Bank and IMF ‘gentleman’s agreement’ has ensured that the IMF managing director is always a European and the World Bank president a US national. While this is not prescribed in the Articles of Agreement of either institution, it dates back to the creation of the institutions in 1944, when membership of the IMF and World Bank was limited to 45 and 38 states, respectively, and European powers still retained colonies (see Inside the Institutions, What is the gentleman’s agreement?).

Civil society has long pointed out that the Fund and Bank continue to undermine their legitimacy by adhering to the gentlemen’s agreement, calling for a transparent, merit-based process (see IMFboss.com, WorldBankpresident.org). Nevertheless, leadership changes in 2019 at both the Bank and Fund saw the gentleman’s agreement maintained (see Observer Spring 2019, Autumn 2019).

Fund’s 15th review of quotas delayed as US blocks redistribution of voting rights.

Analysis of the IMFC communiqué published on 8 April from the 2021 World Bank and IMF virtual Spring Meetings.

The world awaits to see whether Trump’s defeat will result in the end of the 'America First' approach and a democratisation of the IMF and World Bank and the multilateral system.

This Inside the Institutions looks at decision-making and governance structures at the IMF and World Bank.

Latest Review of Quotas expected to be quashed, as US signals it will block reform.

Uneven votes shares and global power imbalances shape the IMF voting shares, as it prepares to shake up its voting quotas

This Inside the Institutions examines the recent and ongoing reforms at the IMF and World Bank, and places them in context of existing structures and processes.

Reform to the IMF’s voting shares shifts some power to emerging countries, but the institution’s leadership selection process remains opaque and undemocratic.

The Reflection Group on the 2030 Agenda for Sustainable Development