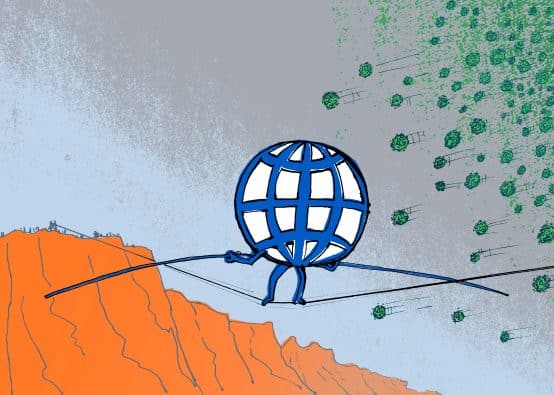 The global economy is on the verge of an event of similar to or of greater proportion than the 2008 financial crisis, as Eric Toussaint of the Committee for the Abolition of Illegitimate Debt (CADTM) noted in a March article on the CADTM website. He stressed, however, that, while triggered by the COVID-19 pandemic, the evolving crisis’ origins are rooted in rising inequality, the increasing power of finance and other related dangerous distortions. The World Bank’s Maximising Finance for Development (MFD) approach (see Observer Summer 2017), founded on privatisation and financialisation, is both a reflection of and a contributor to the underlying dynamics of the current instability. Supporting Toussaint’s argument, the 2019 UN World Economic Situation and Prospects report noted that global economic growth was at, “the lowest rate since the global financial crisis of 2008-2009” adding, “The world economy is plagued by risks that threaten financial stability…in some emerging economies, high levels of debt are pervasive.”

As UK-based civil society organisation (CSO) Jubilee Debt Campaign’s March call for a moratorium on debt payments for poor countries most affected by COVID-19 and for the cancellation of their debt to the IMF stressed, these will be hardest hit by the crisis. A March 2018 Development and Change journal article by Pablo G. Bortz and Annina Kaltenbrunner stressed that financialisation — which underpins MFD — has exacerbated “the subordinated position of DEEs [developing and emerging economies] in the international economic and financial system and…contributed to uneven international development.” These processes in turn result in significant constraints in the capacity of these states to respond to the COVID-19 crisis.

Amid concerns about declining trust in public institutions, further marginalisation and decreases in social spending are expected to continue. A working paper by Isabel Ortiz and Matthew Cummings projected that austerity may become the norm up to 2024 (see Observer Winter 2019). In light of these concerns and the IMF’s January research demonstrating that, after a certain point, the size of the financial sector contributes to inequality and thus to financial instability, questions about the consequences of the proposed reliance on leveraging private finance to fund the Sustainable Development Goals (SDGs) are paramount.

The World Bank’s MFD approach, founded on privatisation and financialisation, is both a reflection of and a contributor to the underlying dynamics of the current instability.

Demonstrating that MFD’s private sector first approach is still at the top of the Bank’s agenda, as reported by online news outlet Marketing Edge during the October 2019 World Bank and IMF Annual Meetings, World Bank President David Malpass stressed that the World Bank looks “for private-sector solutions to development challenges and directs World Bank programs to overcome obstacles in the private sector framework.” He added, “Our development plans…will increase the focus on private sector involvement and engagement.”

The MFD agenda is premised on enticing trillions of ‘idle’ private sector dollars to invest, and profit from, activities with positive development outcomes. This is to be done through a series of de-risking activities and instruments, including privatisation, the creation of new asset classes through public-private partnerships (PPPs) (see Observer Summer 2018), guarantees, and the creation of business friendly environments along the lines of the Bank’s much-criticised Doing Business Report (see Observer Winter 2018). According to Daniela Gabor of the University of the West of England Bristol, MFD represents an effort to implement the ‘Wall Street Consensus’ by “reorient[ing] financial systems towards market-based finance and to forge the de-risking state,” where the state and the public assume the risks of private sector investments through guarantees and other subsidies.

While MFD is officially being ‘piloted’ in nine countries, its implementation is diffuse within the World Bank and has been widely adopted by the international community more broadly through the Agenda 2030. MFD’s wide-ranging impact and reach can, for instance, be seen by the partnership agreement between the United Nations (UN) and the World Economic Forum signed in June 2019, which was criticised by more than 400 CSOs as a “corporate capture of the UN.”  Jomo Kwame Sundaram and Anis Chowdhury, noted in a March 2019 Inter Press Service article that the World Bank continues to argue that MFD is the only answer and, “has successfully legitimized the notion that private finance is the solution to pressing development and welfare concerns, including achieving the SDGs.” Given the Bank’s long-held belief in the superiority of market solutions, MFD’s emphasis on creating markets is better understood as an evolving and more programmatic encapsulation of an existing model (see Observer Winter 2018; Update 81). This approach is being increasingly integrated into country-level planning, with the World Bank noting it, “has diagnostic tools to support MFD…[including] the Country Private Sector Diagnostic (CPSD), which takes an investor perspective in reviewing all economic sectors to identify opportunities for action to spur private sector-led growth.”

The negative impact of key elements of MFD are well documented (see Observer Winter 2019, Autumn 2019, Spring 2017).  A 2018 civil society report demonstrated that in the case of PPPs, another key element of MFD, it is invariably the state — rather than private investors — that typically underwrites the risk under PPP arrangements (see Observer Summer 2018). The negative and gendered impacts of the World Bank’s development policy lending in support of MFD have also been extensively detailed (see Briefing, The World Bank and gender equality: Development Policy Financing). A 2018 open letter signed by over 110 academics detailed MFD’s many structural flaws, stressing that its promotion of shadow banking to create investable opportunities in essential services such as water, health and infrastructure can have long-term negative consequences for equity in service provision.

While not formally categorised as an MFD project, the perils of MFD’s reliance on enticing private investment, and particularly foreign direct investment, at any cost, are made clear in a February report by the Netherlands-based CSO, SOMO, on Mongolia’s Oyu Tolgoi copper mine. The report stressed that with support from the World Bank and IMF, in 2009, “Mongolia signed an Investment Agreement for the Oyu Tolgoi Project that privileges ‘western’ corporate interests by offering generous corporate oriented incentives that do not fill public coffers.” It added that the government was forced to cancel its 2006 ‘windfall tax’, therefore dramatically reducing revenues from the mine and that billions of dollars in loan obligations undertaken by the government may be worthless. The role played by the World Bank in Ghana’s alarming fiscal situation by virtue of its contribution to the development of its oil and gas sectors through PPPs and various guarantees, which form key pillars of MFD, provides yet additional clear evidence of the approache’s tangible dangers (see Observer Spring 2020).

Despite MFD’s claims to effectively use public funds to leverage private sector investment for development outcomes, recent research has demonstrated that its promises are exaggerated. An April 2019 report from UK-based think tank, the Overseas Development Institute, noted that blended finance is unlikely to meet the SDG financing gap and, “risks undermining the poverty eradication agenda in the poorest countries.” UK-based CSO Stamp Out Poverty’s report in April 2019 similarly questioned lofty projections of the ability of public money to leverage private sector finance for development and noted that, “The false promise may detract…from other useful policy measures, such as focusing more efforts on mobilising domestic tax revenues or fighting tax avoidance instead.”

Within that context, many have argued that more egalitarian financing alternatives with fewer risks are available. The 2017 ILO, UN Women and UNICEF report on fiscal space for social protection, for example, provides eight options to expand fiscal space to finance the SDGs. UK-based CSO Christian Aid’s 2019 Trapped in Illicit Finance report stressed that, “Governments are constrained in their resources because they tolerate widespread tax evasion and avoidance…This report estimates that public revenue losses from IFFs [illicit financial flows] amount to around $416bn every year,” adding, “we are made to feel that our governments are effectively helpless in dealing with the multiple crises facing our societies and economies, and all we can do is turn to the private sector and appeal to their generosity and social conscience… but this is not just misleading; it is simply wrong.”

Concerns about MFD therefore go beyond its exaggerated claims to contribute to development outcomes and are centred on the fact that it is a new and possibly more dangerous incarnation of pre-existing and widely-criticised policies. Patrick Bond from the University of the Western Cape, traces the Bank and Fund’s current approaches to their promotion of Washington Consensus policies after the 1980s debt crisis (see Briefing, Bretton Woods at 75, A series of critical essays). Sundaran and Chowdhury caution that MFD leads to the diversion of scarce public resources “to ‘de-risking’…to transform ‘bankable’ development projects into tradable assets…[and] governments will bear more of the likely costs of greater financial fragility and crises.” As noted above and outlined in the 2017 UNCTAD World Trade Report, the financialisation inherent in MFD has already had significant and long-term consequences, contributing to inequality, financial instability, increased food insecurity (see Observer Spring 2020) and perpetuation of the subordinated position of the Global South in the world economy. These are precisely the underlying conditions that make the evolving global economic crisis triggered by COVID-19 significantly worse. In light of the considerable risks, it is imperative that the Bank ceases its push for MFD and instead focuses on strengthening state capacity to meet equitable and ecologically sustainable development objectives through well documented policy alternatives..