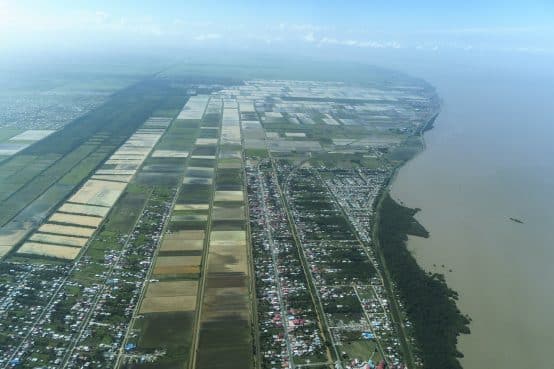 Guyana's low-lying coastline makes it vulnerable to climate change, one of a host of reasons Guyanese CSOs have opposed the Stabroek offshore oil and gas development. Photo: Dan Sloan.

World Bank support for governance reforms linked to Guyana’s offshore oil development have been called into question in recent months, after research by Germany-based civil society organisation (CSO) Urgewald found that a law firm contracted by the Bank under a technical assistance loan had long-standing links to ExxonMobil, one of the companies involved in developing Guyana’s Stabroek offshore oilfield.

According to Urgewald, the law firm Hunton Andrews Kurth was contracted by Guyana’s government and paid $1.2 million by the World Bank to draft the country’s new petroleum laws. The firm has, per Urgewald, “represented ExxonMobil for some 40 years, including as a top lobbyist.”

Following letters sent by Guyanese and international CSOs to World Bank President David Malpass and members of the Bank’s executive board, and extensive coverage by international and local media, Hunton Andrews Kurth contacted Guyana-based newspaper Kaieteur News in June to state that it had informed the Guyanese government it, “would not represent the Government on the matter.” This has yet to be confirmed by either the Bank or the Guyana government, Urgewald says.

The World Bank has undermined the rule of law in Guyana and must accept some responsibility for the current constitutional crisis in which an unlawful government is trying to hold on to power fraudulently. The World Bank has lent money to a government that had no lawful authority to borrow that money.Melinda Janki, international lawyer

The tip of the iceberg: Procurement concerns symptomatic of wider dismay about Bank’s role in Guyana’s oil development

The technical assistance loan includes support for an, “update of Guyana’s legal and regulatory frameworks for the governance and oversight of the O&G [oil and gas] sector.” Guyanese groups are concerned this will dilute legal environmental protections in Guyana, which are considered a regional gold standard and inspired many elements of the Escazú Agreement – i.e. the Regional Agreement on Access to Information, Public Participation and Justice in Environmental Matters in Latin America and the Caribbean.

Despite the Bank’s aims to improve governance in Guyana, the country has slipped into political chaos since agreeing World Bank support. Following criticism of the ruling APNU-AFC Coalition and their handling of the petroleum contract for the Stabroek oil field, the coalition lost a vote of no confidence in December 2018 and became an unconstitutional government in September 2019 following their refusal to hold elections. A subsequent election in March 2020 favoured the opposition PPP/C party, but this has been contested by the incumbent APNU-AFC Coalition, despite them being unable to produce any evidence, in a move which has been widely condemned by international observers.

“The World Bank has undermined the rule of law in Guyana and must accept some responsibility for the current constitutional crisis in which an unlawful government is trying to hold on to power fraudulently,” said Melinda Janki, an international lawyer based in Guyana. “The World Bank has lent money to a government that had no lawful authority to borrow that money. The World Bank allowed an individual to sign the Financing Agreement as Minister of Finance in direct violation of the Constitution. That is direct political interference in Guyana by the World Bank.”

The country’s political deterioration comes as Guyanese citizens again wrote to President Malpass in June to query the World Bank’s proposal that Guyana join the Zero-Gas Flaring Initiative, which would paradoxically allow Exxon’s subsidiary Esso to keep practicing routine flaring, before eventually stopping in 2030. Esso has flared over 9 billion cubic feet of associated gas in just six months off the coast of Guyana, according to civil society observers, even though its environmental permit prohibits routine flaring. “Exxon has neither been forthcoming with information about the flaring nor taken adequate measures to prevent this harmful and unnecessary practice,” said Nikki Reisch of US-based CSO Center for International Environmental Law.