Austerity in the Eurozone 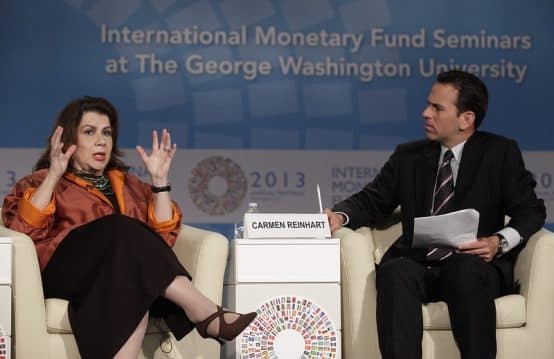 Prior to the appointment, Reinhart was a professor of the international financial system at Harvard’s Kennedy School of Government. Previously, she served as a senior policy advisor and deputy director at the IMF and vice president and chief economist of the investment bank Bear Stearns, a post also held by Malpass.

Reinhart takes up the position amidst the Covid-19 pandemic, as the world faces the worst recession since the Great Depression and calls for sustained fiscal stimulus abound (see Dispatch Springs 2020). In this context, her appointment has raised concerns because of her past support for austerity policies.

For the World Bank...a higher level of integrity will be required for it to become credible.Jayati Ghosh, Jawaharlal Nehru University

Reinhart is well-known among economists for her discredited public debt modelling work alongside fellow Harvard economist Kenneth Rogoff in their 2010 paper entitled Growth in a Time of Debt.

The paper claimed that when a country’s debt rises to more than 90 per cent of GDP, economic growth is slowed by 0.1 per cent. Reinhart and Rogoff argued that public debt causes economies to sharply contract, which in turn makes debt unsustainable and causes default. To avoid this fate, in a 2010 Financial Times piece, they recommended that countries in debt tighten fiscal policy, warning that, “Countries that have not laid the groundwork for adjustment will regret it.”

It was considered incredibly influential in shaping pro-austerity policy debates following the 2008 global financial crisis, most notably in the Troika’s (the European Central Bank, the European Commission and the IMF) loan programmes for Greece during its sovereign debt crisis (see Observer Autumn 2018). US news website Business Insider highlighted in 2014 that, “Their research is frequently cited as one of the inspirations for austerity measures, with high-profile advocates…citing it during key debates about the need for euro zone budgetary tightening.” A 2013 Financial Times article described Reinhart and Rogoff as the “intellectual godmother and godfather of austerity.”

Former UK Chancellor George Osborne used the paper as justification for the rollout of austerity when in government (even after the paper was discredited). The paper is also credited for influencing Germany’s long-running debt brake policy.

In 2013, an economics doctoral student discovered that the paper included major errors, significantly skewing the results. In fact, the corrections showed that countries with 90 per cent debt ratios see their economies grow by 2.2 per cent, instead of the 0.1 per cent decline claimed by the paper. The IMF further refuted the findings in a 2014 paper, which found no evidence of a “magic threshold” for debt “above which medium-term growth prospects are dramatically compromised.” Despite this, Reinhart and Rogoff defended their paper in a New York Times article, maintaining claims that high debt curbs growth.

As the pandemic continues to wreak havoc on the global economy, observers will be closely following how Reinhart’s leadership shapes the World Bank’s approach to this critical moment.

During a May interview with The Harvard Gazette, she noted her support for a temporary debt standstill, despite the World Bank’s refusal to offer debt suspension on its own loans.

Economist Jayati Ghosh highlighted that, “In times of crises, global institutions should be led by those with a high level of credibility”, adding, “For the World Bank, which lays out principles for development and conditionalities for loans, a higher level of integrity will be required for it to become credible and trusted in developing countries.”

Austerity in the Eurozone