Breaking out of the double squeeze: The need for fiscal and policy space during the Covid-19 crises

Bretton Woods Institutions challenged by the outbreak of Covid-19

From the great lockdown to the great meltdown: Developing country debt in the time of Covid-19 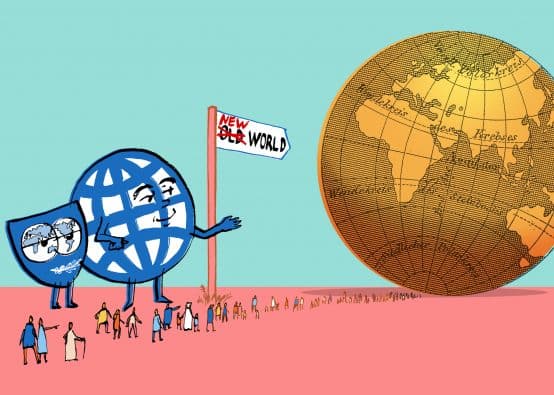 When the devastating impacts of the Covid-19 pandemic started to become apparent this spring, myriad critical thinkers from civil society, academia, the UN and other spaces called for a fundamental rethink of the policies and architecture that make up the international development and finance landscape (see Dispatch Springs 2020). Arguing that the virus only exacerbated pre-existing vulnerabilities and instabilities, they demanded transformational change, proposing multi-coloured global new deals that would see government intervention in support of a just transition to low-carbon, care-centred economies that transform the position of developing economies in the world order.

The sentiment that returning to business-as-usual is no longer an option also appeared to percolate into international policy spaces, as the IMF and World Bank adopted calls for governments to “build back better” in response to the Covid-19 crisis. In the June edition of the IMF’s magazine, Finance & Development, IMF Managing Director Kristalina Georgieva argued that this opportunity must be seized to, “reshape how we live and to build a world that is greener, smarter and fairer,” while the Bank echoed that opportunities exist to “build back better” in its Covid-19 policy response, calling for a “sustainable recovery”.

This rhetoric is reminiscent of the institutions’ responses after the 2008 global financial crisis. Yet, despite promises to learn the lessons from past crises, they ultimately proved unwilling to change their neoliberal policy spots, as most recently evidenced in May in ITUC’s landmark twin reports on the IMF and World Bank. Early signs indicate that even ‘building back better’ as currently presented by the Bank and Fund, which still falls short of the transformational change called for by many outside observers, might be too ambitious for the Bretton Woods Institutions. Instead of change, evidence suggests that the IMF and Bank-led recovery plans will lock in the same broken economic and development models that have exacerbated this crisis (see Observer Summer 2020).

A return to austerity measures after 2020 is completely inadequate.Isabel Ortiz, Initiative for Policy Dialogue

While commentaries by economists making the case for sustained fiscal stimulus in the context of Covid-19 seemed to be cropping up left, right and centre, the IMF signalled early on that even the unfolding crises will not lead it to relax its long-standing adherence to stringent austerity measures over the long term. Its April Fiscal Monitor, for instance, called for “a more ambitious, credible medium-term fiscal consolidation path,” for emerging and middle-income economies after the peak of the crisis. While the technically “voluntary” policy commitments made in the majority of the 77 loans approved by the IMF between March and June should be considered “de facto conditionality”, as the IMF has begun to approve new or adapt existing programmes with formal conditionality attached, the consequences of its persistent dedication to fiscal consolidation are becoming alarmingly clear.

For example, in June, the IMF agreed a 12-month, $5.2 billion loan programme with Egypt, after providing an initial $2.772 billion in emergency financing in May. The June agreement detailed a FY2020-21 primary budget surplus target of 0.5 per cent to allow for Covid-19 related spending, but demanded it be restored to the pre-crisis primary surplus of 2 per cent in FY 2021-22. The IMF also agreed a new 18-month, $5 billion loan programme with Ukraine in June, in which it praised Ukraine’s fiscal consolidation efforts pre-Covid-19 that it noted were, “achieved mainly through a reduction in the real value of wages and social benefits,” and set out fiscal consolidation targeting a primary surplus of about 1-1.5 per cent by 2023 (see Observer Summer 2020).

In Jordan, emergency financing in May came on top of a four-year loan programme agreed in January. While the Fund recognised fiscal consolidation targets conditioned in the original programme would need to be reconsidered for 2020 in the context of Covid-19 spending, the 2024 fiscal surplus target remained unchanged, meaning fiscal consolidation will need to be resumed at a higher speed, “from 2021, [including by] cutting lower priority spending.” Similar long-term fiscal consolidation measures were agreed in a loan programme with Pakistan, where resistance against the resulting hospital privatisations and public salary freeze were already reported in March. While the emergency financing the IMF provided to Ecuador in May came with a request for the cancellation of its existing programme, the IMF still set out a primary surplus target of about 3.1 per cent of GDP by 2025 (see Observer Summer 2020). James Heintz with the University of Massachusetts Amherst commented, “Such rigid fiscal targets unnecessarily constrict the policy space available to countries to recover and adapt to new realities as the Covid-19 crisis evolves – and are ultimately a product of a set of biases that favour financial interests and further entrench global inequalities.”

How the World Bank aims to implement the ‘building back better’ agenda into concrete measures that are integrated into its project and programme pipelines remains equally unclear. With increased pressure to ‘get money out the door’,  there is concern that much of the Bank’s lending over the next 15 months will fund pre-existing projects with little connection to the just recovery agenda. While CSOs point out that “the pandemic highlights just how much we need high-quality public services,” the Bank’s embrace of its private-sector-first Maximizing Finance for Development (MFD) approach seems undiminished (see Observer Spring 2020). The International Finance Corporation, the Bank’s private sector arm, is playing a central role in the Bank’s immediate pandemic response (see Observer Summer 2020; Dispatch Springs 2020). Post-Covid-19, as governments face serious fiscal constraints, in part shaped by the IMF’s restrictive fiscal policies and dependence on international financial markets and credit ratings agencies (see Observer Summer 2020), there are concerns that the Bank’s MFD approach will be used to support a race to the bottom to encourage investors back into hard-pressed developing countries.

This can already be observed from various Bank blogs indicating that, “healthy cooperation with the private sector will be more important than ever as countries exit this crisis even more fiscally constrained.” A June Bank note on assisting countries’ decarbonisation efforts by 2050 also carved out a central role for the private sector in mobilising finance for climate action. Perhaps more worryingly, this can also be discerned from policy conditions in Bank loans agreed as the pandemic unfolded in May. For instance, a development policy loan (DPL) to Ecuador contained conditions to reduce the number of fixed sectoral and occupational minimum wages and expand exemptions for a tax associated with financial transactions, and a DPL to Kenya supported crowding private investment into “affordable housing.” Meanwhile, a $750 million Bank ‘programme for results’ loan to Nigeria’s power sector approved in June, “seeks to de-risk the power sector for private investment through a comprehensive package of financial, operational, governance, and policy interventions.” The loan was approved as the country slipped further into a severe debt crisis, with the collapse of global oil prices triggered by Covid-19 shrinking government revenues.

Too late to change course?

Responding to the IMF’s renewed medium-term targets, Isabel Ortiz with the Initiative for Policy Dialogue, commented that, “The pandemic has revealed the weak state of global public health systems – generally overburdened, underfunded and understaffed because of earlier austerity policies and privatisations. A return to austerity measures after 2020 is completely inadequate – governments must look for fiscal space to achieve the sustainable development goals and effectively build back better.”

Similarly warning the World Bank of “dangerous complacency”, in a July statement, former UN Special Rapporteur on extreme poverty and human rights, Philip Alston, said that, “The rush to fund the SDGs through ever-greater reliance on the private sector…is a blind alley. Too many ‘win-win’ promises are fairy tales.” He went on, “after decades of unparalleled growth, the primary beneficiaries have been the wealthiest. Rather than an end to poverty, unbridled growth has brought extreme inequality, widespread precarity in a world of plenty, roiling discontent and climate change—which will take the greatest toll on the world’s poor.”

The Bretton Woods Institutions have a vanishing window of opportunity to rise to calls for transformational change, confront what 75 years of their own policies and structures have done to bring the world to another point of crisis, and change course – but will they use it?

Breaking out of the double squeeze: The need for fiscal and policy space during the Covid-19 crises

Bretton Woods Institutions challenged by the outbreak of Covid-19

From the great lockdown to the great meltdown: Developing country debt in the time of Covid-19