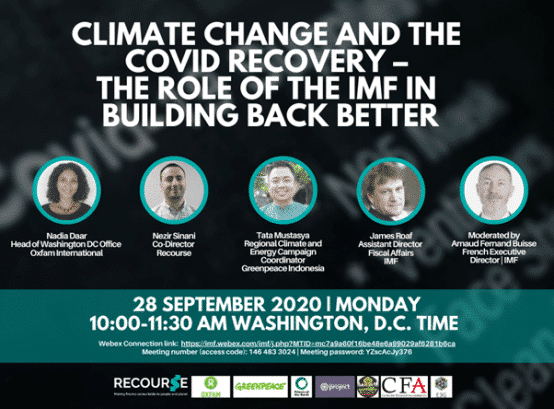 Notes from the Civil Society Policy Forum session on 28 September.

This Civil Society Policy Forum session was sponsored by Recourse, Oxfam, Greenpeace, Friends of the Earth, EarthlifeAfrica, Centre for Financial Accountability, Bretton Woods Project, and E3G. Video of the session in available online.

Arnaud Fernand Buisse (moderator): as part of my previous role with the French ministry of finance, I was involved in the COP21 negotiations that led to the Paris Climate Agreement, and the launch of the Green Climate Fund. So I agree that this is a very important issue for the IMF to address.

The Covid-19 situation has to be taken into account: At the beginning of the crisis, it was a very easy point for people who don’t want to make progress on climate to say climate should be left on one side. But even with an almost complete stop of economy, there was only a marginal reduction in emissions. This shows what scale of change is needed.

During the recovery phase, most countries will spend a lot of public money. Spending in the green sectors can be even more labour intensive than in other sectors.

What is the role of the IMF? In the debate with colleagues on Board, there is always the question of, “How does this relate to our mandate?” But it is macro-critical, with strong spill overs. So, adaptation and mitigation are critical to Fund’s work.

We’re also looking at our 1.5ºC pathway, and how we can Build Back Better.

We’re at a cross-roads in Indonesia, of whether we continue using dirty coal, which is 54 per cent of energy mix, or whether we are shifting to cleaner renewable energy. In the Southeast Asia power scorecard released by Oxfam last week, Indonesia performed the worst of 11 countries.

We have 200 gigawatts of renewable energy potential, but only 0.02 per cent of it has been developed. We also have a monopoly in power sector, with the state-owned power utility PLN favouring coal.

Green investments are currently absent from Covid-19 recovery funds in Indonesia. The mainstream policy view is idea that climate policy comes as trade-off to economy. There is an omnibus bill and mining legislation being introduced that are a race to the bottom in terms of environmental regulation.

IMF should assist Indonesia and other countries to build back better, by prioritising renewable energy in its policy advice, making countries aware of the economic implications of shifting to a 1.5ºC pathway, and recommending countries exclude fossil fuel support from their Covid-19 recovery plans.

Nezir Sinani (Recourse): As the IMF’s briefing paper on Greening the Recovery noted, “The Covid crisis won’t change the climate, but the response will.”

We’re hoping that the IMF will play an important role in greening the recovery. I am going to present some preliminary findings of a review we conducted with Greenpeace Indonesia, EarthlifeAfrica, and the Centre for Financial Accountability of IMF surveillance in five countries, India, Indonesia, the Philippines, Mozambique and South Africa. The review aims to provide a better response to the Covid crisis and the climate crisis by showing how IMF policy advice is relevant to the energy sector.

The key findings of the study were that IMF surveillance in these countries:

Based on these findings, we propose the following recommendations:

James Roaf (IMF): I am the coordinator of climate change policy in the Fiscal Affairs Department (FAD). We do have a role to play on climate at the IMF, especially as we have a universal membership. Some of these are difficult discussions, including in fossil-fuel exporting companies. And for engagements with ministries of finance and central banks these discussions are vital as well.

I’ll talk a little bit about where can climate add value in different areas of the IMF’s work, including its policy dialogue role (surveillance), capacity development (design and implementation of policy), and its loan programmes.

For surveillance, we are trying to expand dialogue on these. These are necessarily selective. We can’t cover it in every year, in every country.

We have been covering climate in our flagship reports, including the Fiscal Monitor last year, and this year’s World Economic Outlook, which looks at how the world can get to net zero emissions while still maintaining growth.

We’ve also been doing Climate Change Policy Assessments for some countries jointly with the World Bank, and we’re hoping to scale this up, and to begin focusing on emerging markets and developing economies. Indonesia would be a good example of a country we’d like to look at.

We have a long history of work and policy advice on fossil fuel subsidies; green budgeting is another area that we are building capacity on.

In terms of programme engagement (i.e. loan agreements), I would expect the least from this area. The conditionality in these programmes are very narrow, and focus on restoring balance of payments. In the recent emergency lending, there have been no conditions attached to finance.

In terms of fossil fuel expansion, the Fund is not going to be able to tell countries what to do in this area: That’s not how we work; we work through surveillance, convening, policy dialogue, etc. We’re not the World Bank Group, we’re not investing in individual projects.

Up until recently, we only had one person working full-time on climate in the Fund, but in FAD and other departments we are building up capacity.

Nezir mentioned the ‘Greening the Recovery’ note that we put out; but during Covid-19, emissions have been dropping for the wrong reason. The decisions that are being taken now on recovery packages are really going to affect things going forward.

In the Fiscal Monitor that’s coming out in a couple of weeks, we look at how the green the recovery has been. Unfortunately, so far countries are doing very little. On carbon pricing, that’s a policy that’s very hard to put in place during a recession, but countries can still put it into their medium term plans as a signal that these changes will be coming in to place.

We have a growth of the gap between rich and poor: The growth in inequality has been vast. In the last 25 years, the richest 1 per cent of the global population have contributed the release of more greenhouse gas emissions than the lowest 50 per cent of the population, according to a new Oxfam report. While the poorest are the least responsible, they will be hit the hardest, with climate change set to push 120 million people more in to poverty by 2030, according to the World Bank.

Understanding climate and inequality as interconnected is key, and understanding the IMF as a key institution for addressing both these issues is also important.

The Covid crisis is profound. According to Carbon Tracker, 2019 was the peak of global fossil fuel demand. The need for jobs is acute. When faced with a major crises, governments can do things that previously have been difficult. But, there are many risks. Fossil fuels have so far received most of bailout funds in energy sector.

Growth-based economic models have led us to these dual crises, with climate and inequality the result of this. Fiscal consolidation is not the answer.

Instead we need taxes on speculative finance, and taxes on the 1 per cent of the population most responsible for climate change. We need new models for economic growth.

Fighting climate change requires two types of actions: Adaptation and mitigation. Both need fiscal space. Governments need fiscal space to tackle the green transition and implement their NDCs [Nationally Determined Contributions to the Paris Agreement]. They need new sources of revenue generation, as James was referring to. We want to see the IMF build progressive policies on luxury carbon taxes.

We also need to be building alternatives, for example in green transport, and other measures, which good for the environment and for the economy for the long-term. We need to be creating more equal economies within the boundaries of our planet.

Arnaud Fernand Buisse (moderator): IMF Managing Director Kristalina Georgieva is a big champion of all these issues. James and his colleagues are very aligned on this. Of course there is a big political discussion happening at the Board. Not only is it macro-critical, but there are huge political effects.

The relationship between surveillance and the NDCs are really key. As James said, it’s important to have a link with the ministries of finance on this. In the case of the NDCs, the country has decided this, so there is going to have to be a policy dialogue between them and the Fund on this. We also need to make sure climate is included in the programme negotiations.

Jon Sward (Bretton Woods Project): I have question for James (IMF) around how staff are picking which Article IVs to focus on in terms of climate, and whether there’s any specific criteria that guides this. As civil society we’re concerned about this issue being tackled unevenly, and it would be great to hear how staff are choosing which countries to focus on, whether that’s systematic, and whether you are increasing the scope to look at transition risks?

James Roaf: We’re looking at this right now, and we’re going to be discussing this with our teams, and our Board. There is also the comprehensive surveillance review going on, which will tackle this issue of how surveillance integrates climate change going forward.

On the transition risk issue, that is something that we want to do much more on. It’s clear that countries should be planning to move away from fossil fuels. This is an interesting question in terms of climate pricing. In terms of Paris Agreement, this looks at where emissions are being burned, rather than transition risks.

Arnaud Fernand Buisse: Producer countries have this argument that it is a ‘consumer issue’. If other countries don’t consume, then they don’t produce. But this is a little bit like the drugs issue. In the end, I agree with you, James, that it’s at the point of consumption where the price is, but producer subsidies have also been paid somewhere along the line, probably from producer country’s ministry of finance.

James Roaf: We are not in favour of producer subsidies; we have been advising countries that they need to diversify, and to know which way the wind is blowing.

Nadia Daar: We need to broaden out the conversation, and focus on how these policies also impact on inequality and gender.

UN official and civil society criticise World Bank and other MDBs for lack of ambition at COP26.

Civil society voices concern about continued support for fossil gas under the policy.