After the Beirut explosion, disaster capitalism has Lebanon in its sights

Lebanon begins negotiations with IMF, as banks barricade against protesters

Lebanon can save its economy, just not with the help of the IMF

New BWP report on the IMF in MENA region 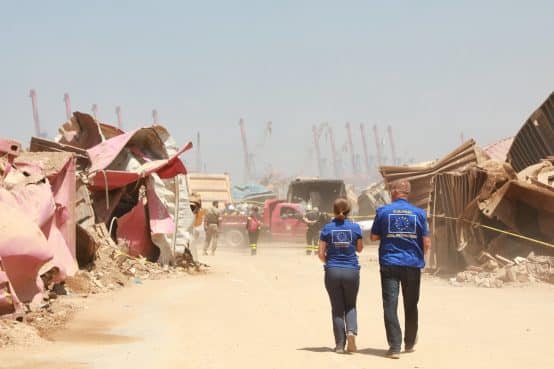 The EU's response to the tragic explosions in Beirut, Lebanon. Credit: Bernard Khalil

On 9 March 2020, Lebanon’s government announced that it would not be paying $1.2 billion in Eurobond payments, thus declaring the first sovereign default in the country’s history. The decision to default was supported by a number of progressive activists and experts, given the shortage of foreign currency at Lebanon’s central bank and the need to use this reserve for more pressing purposes.

The default came at a point of multiple financial and economic crises, caused by decades of corruption and an economic model based on extracting income from rent-based sectors (such as remittances, banking, real estate and foreign aid) to fund imports and consumption, at the expense of productive sectors. In parallel, the financial sector (both the central bank and commercial banks) provided the necessary funding for politicians to distribute public resources to their cronies and sectarian clients. Unsurprisingly, this model also led to an extreme concentration of wealth and income, with a quarter of all new income going in the pockets of the top 1 per cent, and with 0.1 per cent of bank accounts containing 20 per cent of all deposits.

The economic model failed as the country’s trade deficit grew, and with it public debt resulting from borrowing at high interest rates. The central bank’s approach was to postpone the meltdown through financial engineering measures that accumulated further debt in US dollars, thus worsening the vicious cycle.

Further economic pressure on ordinary residents is not an option today.

Until the beginning of the financial meltdown last October, international financial institutions (IFIs) seemed accepting of this economic model and the policies maintaining it. The IMF repeatedly praised the central bank’s policies in its Article IV reports, especially in terms of maintaining a large foreign exchange (FX) reserve and attracting deposits. In turn, the World Bank has provided, and recently newly pledged, sizable loans conditioned on complementary ‘structural reforms’. Both institutions had little concern for reorienting economic growth toward productive sectors, and a disregard of extreme wealth and income concentration.

In the summer of 2019, after 22 years of a fixed exchange rate, the crisis manifested in the quick depreciation of the Lebanese Lira, which has lost over 80 per cent of its value against the dollar in the last 12 months. Along with the measures imposed by the government to combat the Covid-19 pandemic, and the tragic explosion at Beirut’s sea port in August, this has made Lebanon’s economic and financial recovery impossible without drastic solutions.

A lifeline for a corrupt elite

Despite the uprising of October 2019, when hundreds of thousands from across the small country’s districts took to the streets in rage against the political establishment demanding fundamental change to the system, the ruling class in Lebanon, including politicians and their partners in the private sector, has not only failed to respond to these emergencies, but has opposed any fair policies that might harm its own interests. These include a capital control law, a forensic audit of the central bank, a default and haircut on internal debt owed to private banks, and a restructuring of the financial sector based on the real existing losses.

The fear of such restructuring, rather than any concerns about the neoliberal paradigm, was what prompted the oligarchs to sabotage negotiations with the IMF. Eventually, the financiers and the government’s technocrats are expected to agree on the diagnosis and prescriptions due to their desperation for a bailout.

Protesters and civil society groups have warned that any funding of the Lebanese state before political change occurs would be a bailout of its ruling class, which has lost popular legitimacy. In this light, Emmanuel Macron’s initiative of conditional support, as well as a potential IMF programme, would secure an opportunity for the continuation of politics as usual and make any real change less likely.

Austerity and the social crisis

Ordinary citizens and residents of Lebanon have been paying the cost of the crisis, with large numbers of businesses shutting or cutting staff costs, resulting in an increase in unemployment. The depreciation of the national currency, and a monthly inflation rate that has reached a record of 57 per cent, have led to a major decrease of purchasing power and increased poverty levels. Government and UN estimates have revealed that over 50 per cent of Lebanon’s population is now under the poverty line, with one study finding that 23 per cent are in extreme poverty, a three-fold increase from 2019.

In this context, a classic IMF intervention involving fiscal consolidation, devaluation of the local currency, shrinking the public sector and removing subsidies on energy, gasoline and wheat, could worsen the social crisis, cause more poverty and potentially lead to destructive social tensions. An obsession with fiscal consolidation as a response to the fiscal deficit will also have harmful impacts on economic development in the medium and long term (see Observer Autumn 2020).

Neither the IMF’s record, nor that of the Lebanese officials negotiating with them, is encouraging when it comes to rethinking neoliberal policies and advancing social justice. As such, civil society has a key role in pressuring both parties in this direction, and the IMF has a responsibility to include progressive civil society groups in a systematic dialogue concerning the conditions for a potential programme.

Such a programme, if it happens, should be based on an approach of prioritising human rights and dignity. Further economic pressure on ordinary residents is not an option today. Instead, plans for further austerity should be replaced with fair policies of revenue generation, including a new progressive tax system and a series of measures that encourage productive investment, protect the poor from the burdens of the crisis, and the establishment of a universal social protection system.

After the Beirut explosion, disaster capitalism has Lebanon in its sights

Lebanon begins negotiations with IMF, as banks barricade against protesters

Lebanon can save its economy, just not with the help of the IMF

New BWP report on the IMF in MENA region