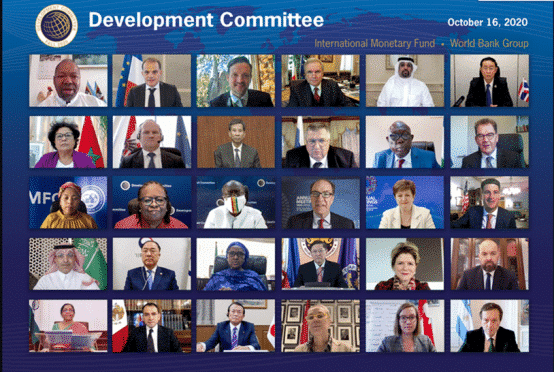 The Development Committee met in an extremely difficult context as outlined in the communiqué, which stressed that, “The pandemic has resulted in the largest global economic contraction of the last eight decades: it is impacting developing, emerging and developed economies; increasing the global poverty rate; exacerbating inequalities; and damaging long-term economic growth prospects.” This analysis reflects the findings of the IMF’s World Economic Outlook and the World Bank’s Poverty and Shared Prosperity 2020 reports released in October. Recognising the long-term political and social impact of the current crises, the Committee highlighted that, “The humanitarian crisis can further exacerbate fragility, conflict, and violence as well as intensify risks, including in small island states”, adding that the pandemic’s consequences are “also widening gender gaps and jeopardizing hard-won development gains and prospects for girls and children overall.”

With no apparent sense of irony given the decades of World Bank and IMF support for fiscal consolidation, public sector wage cuts and privatisation of essential health services (see Observer Summer 2020, Spring 2017), the communiqué began by commending the work of frontline workers, welcoming “the focus on health, social, and economic responses, as well as policies, institutions, and investments that will be critical to resilient, inclusive, and sustainable recovery.” The Committee urged “intensified action to build robust health systems with universal coverage, thus increasing preparedness and resilience against future pandemics.”

Despite the rhetorical emphasis that predates the pandemic on the need for new approaches and a new multilateralism to address slow growth and the inequality and climate change crises (see Briefing, Bretton Woods at 75, Observer Summer 2019), and references to “a resilient recovery centered on jobs and economic transformation,” the Committee continued to push for the “mobilization and crowding in of private capital and finance, with innovative products from IFC and MIGA, maintaining and building on the IFC 3.0 strategy to create markets.” The unwillingness of the Committee to engage with the numerous critiques of the Bank’s Maximizing Finance for Development (MFD) approach embodied in the IFC 3.0 strategy will alarm those who follow the mounting evidence of its negative impacts (see Observer Spring 2020, Summer 2017). In October, European civil society network Eurodad launched a report documenting the negative consequences of the private sector bias in the Bank’s Covid-19 response, underscoring that, “the implementation of the MFD risks worsening inequalities and amplifying the economic and social fallout of Covid-19.” Economist Daniela Gabor of the University of West England, Bristol, likewise highlighted the nefarious long-term macroeconomic consequences of the approach in an October article in Jacobin magazine. Further stressing the failure of the MFD approach, the report and article were complemented by a 19 October article by current and former UN Special rapporteurs in UK newspaper The Guardian titled, “Covid-19 has exposed the catastrophic impact of privatising vital services.” The Committee’s reference to IMF support for building back better and, “promoting the  building blocks for an inclusive and sustainable recovery, ensuring affordable energy access and energy security, and addressing the challenges to economic and environmental vulnerabilities, including climate change,” will draw the attention of the over 500 signatories to an open letter sent on the eve of the Annual Meetings calling on the Fund to “immediately stop promoting austerity around the world”, and noting that it has “already started locking countries into new long-term austerity-conditioned loan programs in the past few months.” The Fund’s role in advancing an ecologically sustainable recovery was also thrown into doubt by an October report by Netherlands-based civil society organisation Recourse, showing that the Fund’s policy advice in its country surveillance is at odds with a green recovery in five countries that are currently expanding their coal sectors. In regards to the Fund, the communiqué studiously avoided mentioning the expansion of the IMF’s Special Drawing Rights, as did the IMFC communiqué (see IMFC communiqué analysis Annuals 2020), as requested by the Group of 24 (see G24 communiqué analysis Annuals 2020).

The Committee stressed that, “The WBG should continue its efforts to deliver a bold and decisive response of up to US$160 billion by June 2021,” and encouraged, “discussions on the WBG financial capacity beyond fiscal year 2021.” However, an October working paper by US-based Center for Global Development (CGD) cast doubts on the Bank’s response, noting that the disbursements to date represent “less than half the increase in monthly disbursements observed during the [Global Financial Crisis]”, adding “while the Bank forecasts a 4.1 percent decline in GDP growth between 2019 and 2020 in the median low- income country…disbursements in 2020 have risen by just 0.3% of GDP.” Validating concerns about the Bank’s efforts to use the pandemic to push for MFD-enabling reforms, CGD noted, “World Bank president David Malpass has fueled doubts about the institution’s eagerness to deploy emergency financing quickly, signalling instead a desire to use COVID relief as leverage to push a longer-term reform agenda.”

In a display of its inability to meet perhaps the most pressing immediate economic challenge facing the Global South and the global economy generally, on debt, the Committee was left to, “support the extension of the [Group of Twenty’s (G20)] Debt Service Suspension Initiative (DSSI) by six months” and to decide during April’s Spring Meetings if it should be extended “by another six months,” while recognising that, “debt treatments beyond the DSSI may be required on a case-by-case basis.”  Reflecting the current impasse at the G20 and with private creditors, the Committee welcomed the “G20’s agreement in principle on a ‘Common Framework for Debt Treatments beyond the DSSI’, which is also agreed by the Paris Club.”

The communiqué also made it clear that contrary to calls for debt cancellation by multilaterals or at least their participation in the DSSI, multilateral development banks (MDBs) should not risk their credit ratings and should instead protect “their current ratings and low cost of funding.” The communiqué nonetheless stressed the need for MDBs to provide “net positive flows to DSSI-eligible countries during the suspension period,” and encouraged the Bank and Fund, “to review the debt challenges of middle-income countries and to explore customized solutions to their fiscal and debt stress on a case-by-case basis, including by providing additional resources in these challenging times.” As the CGD working paper highlighted, “54 of 80 IBRD countries have experienced no increase in net flows, and 40 are actually paying more to the [World] Bank than they are receiving in disbursements during the current crisis.” The Committee also recommended the Bank, “explore additional proposals for COVID-19 emergency financing for IDA countries in its discussions with IDA deputies.”

While few expected something other than the DSSI extension during the Annual Meetings, a variety of actors, including the Group of 30 ‘economic and financial leaders’, the UN Conference on Trade and Development’s secretary general and indeed World Bank President David Malpass (see Wrap up Annual Meetings 2020) stressed its inadequacy. A 14 October open letter signed by more than 500 civil society organisations demanded the, “unconditional cancellation of external public debt payments by all lenders…for all countries in need for at least four years”, stressing that, “over $300 billion is being spent annually by the global south for Public External Debt payments.”

Making plain the power of private finance in what Professor Gabor calls the Wall Street Consensus, the communiqué meekly, “encourage[d] private creditors to participate [in the DSSI] on comparable terms when requested by eligible countries.”

The Committee welcomed the 2020 Shareholding Review Report to Governors, noting that it “looks forward to the completion of the review.” It concluded by thanking the board, “for their work on the ongoing review of IDA voting rights and look forward to its completion by the next Annual Meetings in 2021.”