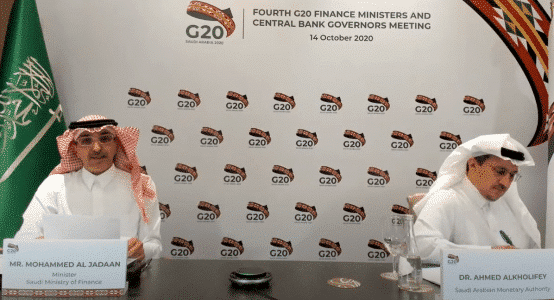 The Group of Twenty (G20) is an informal forum of the world's major economies that discuss global financial and development issues. The G20 is made up of 19 countries and the European Union. The 19 countries are Argentina, Australia, Brazil, Canada, China, Germany, France, India, Indonesia, Italy, Japan, Mexico, Russia, Saudi Arabia, South Africa, South Korea, Turkey, the United Kingdom and the United States.

Amidst predictions of a protracted debt crisis and uneven economic recovery, the Group of Twenty (G20) finance ministers and central bank governors met virtually at the 2020 World Bank and IMF Annual Meetings on 14 October under Saudi Arabia’s presidency. In the face of mounting pressure, including from the World Bank and IMF, to take further action on debt relief and to urgently scale up fiscal support for the poorest countries, the G20 failed to deliver and issued yet another insufficient communiqué.

At the G20 press briefing on 14 October, Saudi Arabia’s Minister of Finance, Mohammed Al-Jadaan, announced an extension of the Debt Service Suspension Initiative (DSSI), by six months, with a commitment to review and consider a further six-month extension at the IMF and World Bank Spring Meetings in April 2021. The announcement falls short of even the most modest calls from leaders of low-income countries for a one year extension, reiterated by the IMF and World Bank. Since it was launched in April as part of the G20’s Action Plan, the DSSI has seen an uptake of only 46 out of 73 eligible countries, largely due to countries’ concerns over how downgrading of their credit ratings would affect access to markets, as well as unease over the requirement to sign up for IMF financial support and the stringent conditions attached. A report by Belgium-based civil society network Eurodad found that debt service suspension through the DSSI represented only 1.6 per cent of the total debt payments due by developing countries in 2020. The report showed that the DSSI excludes 12 lower middle-income countries, 18 small island developing states and 48 upper middle-income countries regardless of their vulnerability to debt distress.

At the same time, multilateral development banks and private creditors are under no obligation to offer debt suspensions, as demonstrated by the World Bank’s refusal to do so to date (see At Issue Summer 2020). Despite warm words of encouragement from the G20 urging private creditors to join, they refuse to play ball, as indicated by a September letter from the Institute of International Finance to the G20.

Ahead of the meeting, World Bank president David Malpass made his frustration clear stating, “[the] DSSI defers debt payments and adds interest, it doesn’t reduce debt. It’s important that people in poorest countries see an actual reduction in the amount of debt.” Beyond the DSSI, the G20 was expected to discuss a common framework for debt reduction but did not reach an agreement. Instead, the communiqué stated that it “agreed in principle” and would work towards negotiating a ‘Common Framework for Debt Treatments’ to be published at the Riyadh G20 Leaders’ Summit in November 2020. In an unusually frank statement at the G20 meeting, Malpass pressed, “It’s urgent to make rapid progress on a framework because the risk of disorderly defaults is rising.”

The framework would set out a process for dealing with debt reduction, including restructuring and relief, but the communiqué confirmed that this will likely be conducted on a “case-by-case” basis. Commenting on the announcement, Iolanda Fresnillo from Eurodad said, “So far we don’t know under which conditions these debt treatments will be offered, to which countries or from which lenders, or whether the agreement includes any kind of debt cancellation.” Sarah Jayne-Clifton of the UK-based Jubilee Debt Campaign welcomed the common framework, adding, “But this needs to be comprehensive, not case-by-case. Next month the G20 need to agree to cancel debt payments by the poorest countries to private, multilateral and bilateral lenders for four years.”

‘When elephants fight, it is the grass that suffers’: Creditors block further action on debt solutions

Malpass and the leaders of G7 countries have taken aim at China, which has come under fire for not participating fully in the DSSI and over its lending transparency. So far, China has not included relief on loans by several state-owned entities, including the China Development Bank. But it maintains that it has provided almost half of the relief negotiated this year. Mark Bohlund from market analyst platform Redd Intelligence emphasised in the Financial Times (FT) that, under the DSSI “a lot of the burden essentially falls on China.”

Though Al-Jaadan assured, “We did not leave any stone unturned,” in agreeing the underwhelming debt relief measures, to many it reveals the G20’s inherent creditor bias. Stephanie Blankenburg, head of debt and development finance at the UN Conference on Trade and Development, told the FT, “There is an agreement among the advanced and developing countries in the G20 to only represent creditor interests. There is no talk at all about how debtor countries might receive their proposals.” In a move that is unusual for the president of the World Bank, Malpass echoed these comments during an event at the Annual Meetings, stating that the G20 is “mostly creditor countries,” who he could imagine have an “interest to get a lot of the debt paid” and to “keep the inertia.” He added that legal structures “favour creditors” and called on the US and the UK in particular to address their own legislation, which facilitate private creditors enforcing debt servicing through the courts. Indeed, the distinction between the G20 creditor interests and private creditor interests is not so clear, as argued by Professor Daniela Gabor in a recent article written for US magazine Jacobin. Sovereign debt owed to private creditors increased nearly three-fold during the past decade, from $186 billion in 2008 to $535 billion in 2018, which equates to roughly 41 per cent of the total sovereign debt stock.

When questioned about debtor countries’ lack of opportunity to input in the debt decision-making process at the G20 press briefing, Al-Jadaan responded by saying that these countries should use their “very large representation” in the IMF and the World Bank to influence debt discussions, a comment that might raise eyebrows the day after the Group of Twenty-Four (G24, a group of developing countries), issued its communiqué calling for quota reform of the IMF for greater representation (see G24 communiqué analysis Annual Meetings 2020). Changes to the Bank’s shareholding in recent years have largely resulted in a greater share for China, while many developing countries remain sorely underrepresented in both the IMF and the World Bank (see Inside the Institutions April 2020).

It is no surprise that the Group of 77 developing countries have long called for a debt workout mechanism, even securing a UN General Assembly resolution committing the body to work towards establishing a multilateral legal framework for sovereign debt restructuring in 2014. Earlier this month, the IMF has come out in favour of reforming the international debt architecture to “support orderly debt restructuring”. In an open letter on 15 October addressed to all governments, international financial institutions and lenders, over 500 groups once again called for “A fair, transparent, binding and multilateral framework for debt crisis resolution (under the auspices of the UN and not in lender-dominated arenas) that addresses unsustainable and illegitimate debt.”

Lending and tax proposals: A tentative drop in the ocean

The G20 welcomed reports on the Blueprints for Pillar 1 and Pillar 2 by the G20 and Organisation for Economic Cooperation and Development’s (OECD) Inclusive Framework on Base Erosion and Profit Shifting (BEPS). The proposals outline new rules on where tax should be paid and a global minimum tax, which the OECD estimated would recoup $200 billion of revenue gains. Yet, the proposals fell far short of expectations. Alex Cobham of Tax Justice Network lambasted the reports as “tax haven lite” and argued that they indicated that the OECD is, “incapable of delivering the urgent tax reforms the world needs.” Tax justice campaigner and journalist Oliver Bullough pointed out that the new proposals would account for under half of the world’s annual losses to tax havens.

Even these piecemeal proposals have yet to be agreed, with the G20 communiqué urging parties to “address the remaining issues with a view to reaching a global and consensus-based solution by mid-2021.” This is despite the OECD’s own warning that developing countries dealing with costs of the pandemic could face a double blow from escalating trade wars unless international talks on tax rules are successful.

Unsurprisingly, the G20’s communiqué was once again silent on the matter of a new issuance of the IMF’s reserve currency, Special Drawing Rights (SDRs), which was previously opposed by both the US and India (see G20 communiqué analysis, Spring Meetings 2020). This comes amidst reports that the IMF and World Bank’s Covid-19 response financing has come nowhere near the required $2.5 trillion to meet immediate Covid-19 financing needs. When asked about this during the press briefing, Al-Jadaan emphasised that the G20 will, “continue to ask…the IMF to explore every option possible to ensure we provide support to countries in need, including through ways of issuing Special Drawing Rights.” An SDR issuance would easily cover the costs of multilateral debt cancellation.

Writing at the start of the Annual Meetings, the Ghanaian Finance Minister and Chair of the G24, Ken Ofori-Atta, highlighted that G20 countries have already spent more than $10 trillion on recovery and economic stimulus packages for their own economies. Ahead of the G20 meeting, he critiqued the US for opposing an issuance of SDRs and China for blocking progress on debt relief, which has stymied the multilateral response, asking, “Where is the fierce urgency for change in a global event of this scale?” It is clear that the G20 as yet has no answer to this question.