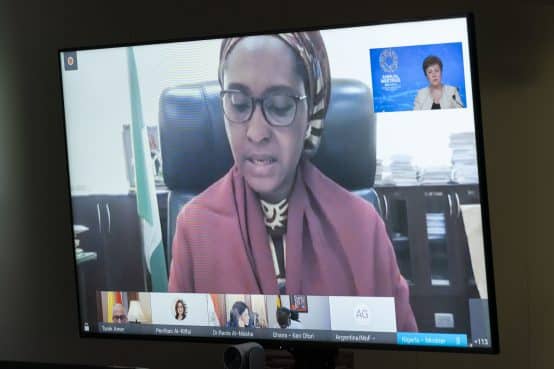 Nigerian finance minister Zainab Ahmed participates in a call with the G24 and Bank Governors during the 2020 Annual Meetings on 13 October. Credit: IMF.

The G24 is a grouping of some of the most influential developing countries in the World Bank and IMF. It includes G20 countries such as India, Argentina, Brazil, Mexico, and South Africa. The G24 communiqué is traditionally the first statement of the IMF and World Bank Annual Meetings. The G24 finance ministers met virtually on 13 October.

The communiqué of the Intergovernmental Group of Twenty-Four on International Monetary Affairs and Development (G24) for the 2020 IMF and World Bank Annual Meetings, released on 13 October, took aim at the scale of the international response to the Covid-19 crisis in emerging markets and developing countries (EMDCs).

The communiqué noted, “The sharp decline in our major sources of revenues along with capital outflows have depleted fiscal resources and reserve buffers at a time when they are most needed. IFIs have responded with emergency support, but external financial assistance still falls short of what is needed in these extraordinary times.” The G24 called, “on the international community and IFIs to step up, to the fullest extent possible, their liquidity and fiscal support to assist EMDCs in limiting the loss of lives, provide social protection and support economic recovery.”

The communiqué noted that G24 countries are, “confronting a long road to achieving sustained economic recovery. A decade of progress in reducing poverty could be lost, and scars from this recession weigh on our development prospects.”

Indeed, with the World Bank’s Poverty and Shared Prosperity report published on the eve of the Annual Meetings revealing that an additional 100 million people had been pushed into extreme poverty in 2020 as a result of the Covid-19 pandemic, climate change and conflict, the stark reversal in development progress the communiqué warned of is already underway.

The G24 called for solutions to the debt crises enveloping many countries, which risks dramatically worsening the economic fallout from the Covid-19 pandemic if left unresolved. It welcomed the G20’s “ongoing discussions on a structured framework for debt treatments, beyond the DSSI [the G20’s Debt Service Suspension Initiative], to support countries achieve debt sustainability,” and argued that, “Such a framework should include mechanisms for debt restructuring and reduction when they are necessary to restore debt sustainability.” The G20’s Annual Meetings communiqué, which approved a mere six-month extension to the DSSI, indicated the details of the framework for debt treatments would be announced at the G20 leaders’ summit in November (see G20 communiqué analysis Annuals 2020).

“We need to see a fierce urgency for change from all actors, with all options on the table,” said Ken Ofori-Atta, Ghana’s finance minister and G24 chairman, in an op-ed published in UK newspaper the Financial Times on 12 October. “Now is not the time for the world’s great economic powers to turn inward.”

The G24 also continued to call for quota reform at the IMF, as in past communiqués (see Dispatch Spring 2020; Observer Summer 2019), and voiced support for a new allocation of IMF Special Drawing Rights (see Background Special Drawing Rights). It noted that, “Completion of the 16th General Review of Quotas within the agreed timeframe is…essential to reduce the IMF’s reliance on temporary resources and to implement long-awaited governance reforms.” The G24 added that it supported, “continued global discussions on a meaningful new SDR allocation alongside mechanisms to channel unused SDRs to vulnerable countries. These will substantially boost the liquidity of many EMDCs at little cost to the international community.”

The G24 was largely complementary of the IMF’s emergency response, welcoming the “temporary increase in annual limits on overall access to the Fund’s resources by member countries,” and “the six-month extension of the higher access limits under the Fund’s emergency facilities,” as well as “ongoing efforts to boost the resources of the Poverty Reduction and Growth Trust (PRGT) and…the Catastrophe Containment and Relief Trust.” The G24 did, however, note the need for additional Fund resources, calling on the IMF to, “explore options to reform its lending toolkit and advisory support and adapt them to the evolving needs of countries.”

The G24 also called on the World Bank to be prepared to step up its support for G24 countries. The communiqué noted, “The need for exceptional financing by EMDCs will persist beyond FY21 [ending 30 June 2021] given the adverse impact of COVID-19 on productivity growth, poverty reduction and inequality, and the WBG needs to be prepared to respond with continued exceptional support beyond FY21.” The communiqué also pointed to the need for increased concessional finance given the scale of the crisis, and noted that multilateral development banks (MDBs) should support crisis-stricken countries by providing a “net transfer of resources,” adding that MDBs, “can and should find effective means to stretch their balance sheets to boost their lending capacity.”

The G24 also noted the need for a coordinated international response to resolve the public health dimensions of the Covid-19 crisis. The communiqué acknowledged, “the G20’s collective support for the development, manufacture and equitable distribution of affordable vaccines and treatments, which are critical global public goods, to contain the pandemic,” adding that, “All countries, without exception, should have timely and affordable access to these public goods on the basis of need.” With Iran – which was denied a request for an IMF loan programme to help it respond to the pandemic earlier this year (see Observer Summer 2020) – now assuming the G24’s rotating presidency, this was hardly a hollow plea. The G24 also welcomed the, “WBG’s proposed $12 billion initiative that would help developing countries procure COVID-19 vaccines to treat up to 1 billion people as soon as effective drugs become available.”

The communiqué concluded with the bloc’s articulation of what a sustainable recovery from the economic crisis triggered by the Covid-19 pandemic would look like for its members, noting, “We need to build economies that are more resilient, harness digitalization, and address longstanding challenges of job-creation, reducing high levels of inequality, climate change and other environmental concerns while providing adequate access to affordable and reliable energy and infrastructure services, particularly in the health sector whose fragility after COVID-19 was evident.”

However, with the international response dictated by the G20’s meagre efforts to address the debt crisis (see G20 communiqué analysis Annuals 2020) and the United States’ position at the World Bank and IMF stymieing an effective multilateral response (see Dispatch Annuals 2020), such ambitions, for now, hang in the balance.