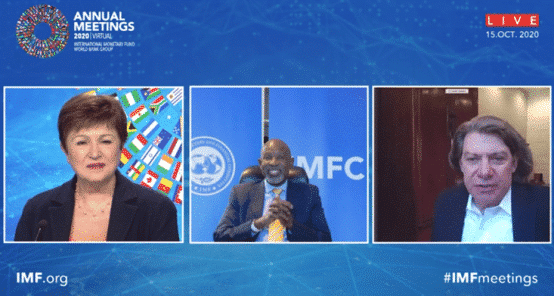 The communiqué of the 42nd meeting of the International Monetary and Financial Committee (IMFC) was issued on 15 October, during the World Bank and IMF Annual Meetings, which took place virtually. The IMFC is the direction-setting body of finance ministers and central bank directors for the IMF. The communiqué of the IMFC usually sets out the consensus position about the direction of the Fund and key reforms. Individual ministerial statements to the IMFC, often revealing of the true differences of opinion amongst the IMF’s membership, are also made available online. The next IMFC meeting is expected to be held on 10 April 2021.

Much like in April, the IMFC communiqué released on 15 October was largely overshadowed by the G20 communiqué released the day before, with international debt relief discussions once again forming the centrepiece of negotiations during the Annual Meetings and the G20 taking key policy decisions (see Dispatch Annual Meetings 2020, Spring Meetings 2020). As the Covid-19 pandemic carves out increasingly divergent economic recovery paths between advanced economies on the one hand, and emerging markets and developing economies (EMDEs) on the other, and international cooperation remains severely strained, there is not much to report on what the IMFC members could find consensus on, which was reflected in its brief and lacklustre communiqué.

Reconfirming IMF forecasts released during the week of Annual Meetings in the World Economic Outlook and Fiscal Monitor, the IMFC expected a tentative global economic recovery that is, “partial, uneven and marked by significant uncertainty…threatening to leave long-lasting scars.” It committed to sustaining and strengthening its efforts to achieve, “strong, sustainable, balanced and inclusive growth…[and to] advance structural reforms to lift growth, employment and productivity.” The communiqué emphasised, “free, fair and mutually beneficial goods and services trade,” as well as promoting investment with high social and economic returns, while only tepidly committing to “work together to help vulnerable countries meet their financing needs.”

Turning to the IMF’s policy agenda, the communiqué once again reflected disagreement on issuing a new allocation of Special Drawing Rights, the international reserve currency held by the IMF, with no mention made of what is arguably the most powerful weapon in the Fund’s arsenal to address a global crisis (see Background Special Drawing Rights). The accompanying ministerial statements revealed once again that a broad majority of countries support a new allocation, including major shareholders like Germany and Italy, as well as the two constituencies representing all of Sub-Saharan Africa. The statement by Steven Mnuchin, Secretary of the Treasury for the United States, which holds an effective veto over major decisions on the IMF board, was silent on the issue, after coming out against a new SDR allocation in April (see Dispatch Spring 2020). In its response to the IMFC communiqué, the United Nations Conference on Trade and Development (UNCTAD) called for a “sizeable fresh allocation that ensures that at least US$ 1 trillion in SDR reach the developing world soon.” It added that, “this represents a meagre 7.5% of the relief packages adopted by the major economies earlier in the year.”

On debt relief, the communiqué supported the G20’s extension of the Debt Service Suspension Initiative (DSSI) and welcomed its agreement in principle on a ‘Common Framework for Debt Treatment’. The Dutch finance minister, representing 14 other mostly European and Balkan countries, noted however that the extension should be limited in time in part because “private creditors are not participating so far,” demonstrating the diminishing power of governments to effectively provide debt relief at a time of crisis in relation to the growing power of the financial sector. Reflecting this grim reality, the IMFC communiqué was merely able to express disappointment at private creditors’ activity and strongly encouraged them to still participate. Presumably in response to reports by the Financial Times of a separate G20 plan that would make debt relief conditional on debtor countries seeking the same treatment from private creditors, including commercial banks and bondholders, the Republic of Congo, representing 22 Sub-Saharan countries, stressed, “the importance of private creditors effectively joining the initiative in a way that will not be detrimental to debtor countries’ access to financing and to their credit rating assessments.” Unlike at the IMFC, debtor countries like those in the Republic of Congo’s constituency have no seat at the table in the G20’s DSSI negotiations, where “there is an agreement…to only represent creditor interests,” according to the same Financial Times reporting. Responding to these dynamics, UNCTAD suggested that, “the time has come to proactively engage with the establishment of a publicly controlled credit rating agency,” in order to break the impasse. In what could potentially be more promising, the IMFC asked the Fund to “prepare an analysis of the external financing needs of developing countries and sustainable financing options.”

The ministerial statements also revealed clear disagreement between the Fund’s members on the degree to which the IMF should be working on “other issues” (sometimes referred to as ‘macro-structural’ or ‘macro-critical’ issues). While the IMFC’s consensus communiqué tepidly supported this work, though only where macro-critical and consistent with its mandate, countries like South Africa, also representing 23 other Sub-Saharan African countries, went further and strongly noted the importance of not losing sight of emerging issues at this time, emphasising “the continued need to prioritise work on inequality, diversity, strengthening social safety nets, climate change, fintech, illicit financial flows, and management of capital flows.” This sentiment was echoed by a letter sent by a group of European ministers during the Annual Meetings to UK newspaper The Guardian, calling on the IMF and World Bank to spearhead a green and inclusive recovery. The UK also warned that decisions made in the coming months will have “lock-in effects for decades to come,” calling on the Fund to support structural transformation towards greener, low-carbon and inclusive growth. Meanwhile, the US warned that the Fund should maintain focus on delivering on its core mandate including resolving debt issues, apparently failing to grasp the critical linkages between climate change impacts and debt sustainability in many countries.

The Fund’s work on gender and inequality, as well as on climate change, could help mitigate harmful impacts of IMF policy advice at country level – in particular if the Fund rolls out systematic ex ante impact assessments of its own policy advice in the context of the Covid-19 recovery. With Eurodad finding that 72 countries that received IMF Covid-19 financing are projected to begin significant fiscal consolidation as early as 2021, and Oxfam finding that the IMF encouraged those measures in 84 per cent of its loans, tempering the speed and rigidity of the Fund’s austerity enthusiasm has never been more urgent. Despite the communiqué’s silence on the issue – the outgoing IMFC chair, Lesetja Kganyago of South Africa, made crystal clear what’s on the horizon in this regard, warning during the IMFC press conference that, “at some stage…you are going to have to do fiscal consolidation.” In its ministerial statement, Brazil, representing ten other Latin American and Caribbean countries, also revealed that it is, “cognizant that the world is heading toward a phase of fiscal consolidation, which has already started for several countries.”

Finally, given the state of the underwhelming commitments agreed in the IMFC communiqué at this time of unprecedented crisis, perhaps the most telling of the ministerial statements were those that revealed who is calling time on the dysfunctional status quo and insisting on governance reforms at the institution. While the IMFC communiqué emphasised progress on countries making bilateral contributions to the IMF’s finances, which operates outside of its quota-based contribution system, and reiterated a commitment to revisiting IMF governance reform under the 16th general review of quotas (GRQ) scheduled for December 2023, several members called for an accelerated timeline, including Russia and the Algerian constituency. In its statement, Brazil also indicated that, “given the belated and frustrating result of the 15th GRQ (see Observer Winter 2019), the work to guarantee a successful 16th review should start sooner than previously anticipated.” South Africa once again strongly restated its call for a third chair for Sub-Saharan Africa on the IMF board, noting, “its criticality in strengthening our representation within the Fund.”

Please find attendance to this IMFC meeting recorded here, the corresponding ministerial statements here, and the transcript and video recording of the IMFC press briefing here.