Mozambique’s secret loans: A scandal that started in London 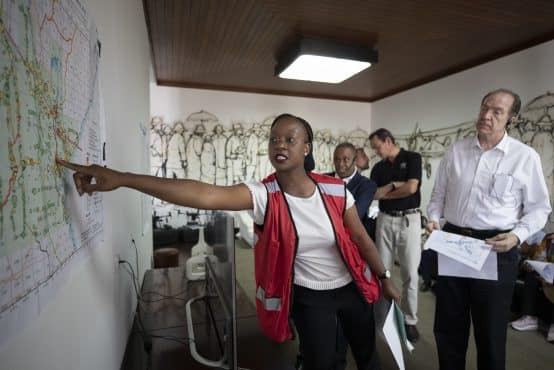 World Bank President David Malpass on a visit to Mozambique in May 2019, following Cyclone Idai. Tropical storms are one threat among many to the new Mozambique LNG project. Credit: World Bank.

Despite the World Bank’s commitment to align its activities with the Paris Agreement, and the vocal public rhetoric from IMF Managing Director Kristalina Georgieva on the need for a “green recovery” to the Covid-19 pandemic, both institutions have provided important support to a controversial new gas mega-project in northern Mozambique.

A consortium led by French oil major Total signed a $14.9 billion debt financing agreement in July to extract and export gas as part of the Mozambique liquefied natural gas (LNG) project – in a deal which amounts to one of the continent’s largest-ever project investments.

The World Bank has provided technical assistance for the Mozambique LNG project under the Mining and Gas Technical Assistance Project (MAGTAP). As noted by online news site Africa Intelligence, MAGTAP – which has recently been extended through the end of 2021 – is financed by $50 million from the World Bank and $8.15 million from the UK’s Department for International Development. MAGTAP has played, “an important role in the negotiating of large-scale mining and hydrocarbon contracts,” according to Africa Intelligence, including “transactions on the coveted gas block 1, operated by Total, and block 4, jointly operated by ExxonMobil and ENI.” A final investment decision on block 4 has been delayed by the Covid-19 pandemic, according to Reuters.

The gas boom has come with increased conflict, violence, corruption and social inequalityFriends of the Earth (FoE) International, FoE France and FoE Mozambique

Although the Bank has announced it will no longer provide project finance to ‘upstream’ oil and gas projects beginning this year (see Observer Spring 2018), the policy excludes the institution’s technical assistance work.

The IMF has also voiced high-profile support for the project, with Abebe Aemro Selassie, IMF director of the African department, commenting on Mozambique’s economic prospects in November that, “LNG can be a game changer for economic transformation, development and inclusive growth, potentially lifting millions out of poverty if the right policies are put in place.”

Overselling the benefits and overlooking the risks?

However, civil society groups remain highly sceptical of the ‘gas-as-development’ narrative. A June report co-published by Friends of the Earth (FoE) International, FoE France and FoE Mozambique argued that the discovery of gas in northern Mozambique a decade ago has already resulted in worsening conditions for Mozambicans: “The gas boom has come with increased conflict, violence, corruption and social inequality… The major gas companies are in a position of power and can set the rules and grab the profits.”

Tax laws promoted by the Bank itself may limit the government’s windfall from the project. June research from German civil society organisation Urgewald noted that, “in 2014 the World Bank’s $110 million budget support to Mozambique required the government to approve a new petroleum tax law… [that] includes…VAT exemptions and accelerated rates of depreciation for oil and gas exploration. These measures may significantly reduce the effective tax rates for companies involved in developing [the project].”

A debt sustainability analysis for Mozambique conducted by the World Bank and IMF in April highlighted several new risks that the Mozambique LNG development faces, including the potentially severe impacts of Covid-19 in the country, project delays, and protracted disruptions to the global economy and trade. It added, “Previously identified risks remain, including…a deterioration in the security situation in the North…and…extreme climate events.”

Indeed, in the wake of Total’s July announcement, Islamist insurgents captured a key strategic port just 60 km south of the project’s location on 12 August, raising the possibility of civil conflict disrupting the project.

Additionally, LNG export contracts are typically pegged to the global oil price index. Analysts at Carbon Tracker have predicted that Covid-19 has brought, “forward the timing of [global] peak fossil fuel demand,” which is “likely to slash the value of oil, gas and coal reserves by nearly two thirds, increasing the risk and likelihood of stranded assets,” in the coming decades.

Even if such forecasts prove a premature obituary for the fossil fuels industry, in the end, the confident revenue projections for the project will only materialise if global climate action stalls: As put by online news site Climate Home, “The bet can only pay off on a dangerously overheated planet.”

Mozambique’s secret loans: A scandal that started in London