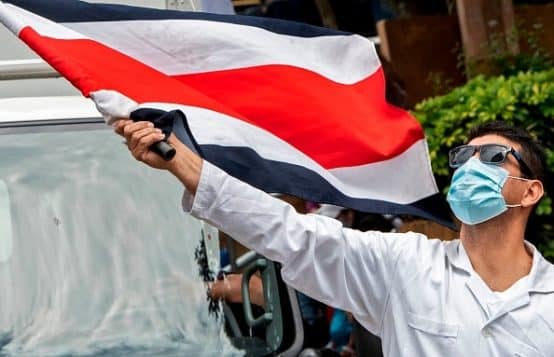 A man flutters a national flag during a protest against the government's motion to increase taxes in order to reach a credit agreement with the IMF, outside the Congress building in San Jose, on November 18, 2020. (Photo by EZEQUIEL BECERRA/AFP via Getty Images) 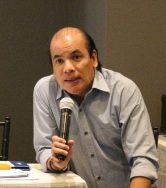 In mid-September, the government of Costa Rica announced negotiations with the IMF to agree a $1.75 billion loan. The loan was premised on a steep reduction of public investment and spending, which would have meant the dismantling of the state and a heavy burden of regressive taxes at a time of severe economic contraction. The proposal triggered strong social opposition, even from business sectors, which opposed increased taxes. Over the course of a few days, the essence of the proposal, albeit perhaps not the prospect of an IMF programme itself, lost its political viability.

Costa Rica is a middle-income country that, unlike its Central American neighbours, and despite being relatively poor, managed to develop a fairly universal social protection system, most notably through healthcare and pensions. However, the system has been continuously at risk of being dismantled by three and a half decades of neoliberal policies. Currently, the entire workforce in the formal sector is covered by the country’s social protection system, while 45 per cent of the workforce in the informal sector remains unprotected. Civil society and unions have defended the role of the welfare state which has allowed the country to guarantee greater equality in terms of a better redistribution of income for many decades. Unfortunately, the Covid-19 pandemic has exacerbated a severe economic crisis, resulting in an economic contraction of five per cent.

Costa Rica is one of the countries in the region with the least fiscal space to respond to the pandemic, given a fiscal deficit and public debt of 9 and 66 per cent of GDP respectively. Austerity proposals such as those of the IMF would therefore imply the country’s economic and political suicide.

A joint effort has been made to carry out an economic adjustment in the face of the worst economic crisis in the last forty years that...does not place the burden of this adjustment on the shoulders of the working class

After the social unrest that resulted from the government’s announcement of its intention to negotiate with the IMF, the government was forced to start a process of dialogue with representatives from diverse sectors of society to identify savings of at least 2.5 per cent of GDP. After three weeks of intense negotiations between civil society, unions, cooperatives, businesses, the Catholic Church and academia, in which I participated on behalf of the main union bloc in the country, 58 agreements on different measures related to revenue, spending efficiency and other issues (some one-off) were signed, representing 3.19 per cent of GDP in total. With all sectors involved having committed to the agreements made, they are now due to be translated into bylaws and formally approved by the executive government and, in other cases, laws to be approved by the parliament.

These measures are focused on greater control over tax evasion and tax avoidance, providing the ministry of finance with better tools to fight tax fraud, as well as concrete measures for greater and better control of customs evasion by importers and exporters. After 20 years of opposition by the business sector, an agreement was finally reached on establishing a global income tax, which applies to all taxpayers with residence in Costa Rica, regardless of nationality or whether the income is generated domestically or abroad. Measures were also approved to restructure the country´s public debt, with a focus on domestic debt, which is its largest component. It was also agreed that the country would join global efforts to restructure its external debt. Regarding public spending, budget adjustment and reduction measures were accepted as long as these do not endanger social policy programmes, do not imply layoffs or wage reductions for public sector workers, nor the privatisation of state assets. And, finally, concrete measures to promote economic reactivation in the post-pandemic period have been agreed, with special emphasis on how to reverse the significant increase in labour and economic informality.

In other words, a joint effort has been made to carry out an economic adjustment in the face of the worst economic crisis in the last 40 years that does not put the welfare state at risk, does not place the burden of this adjustment on the shoulders of the working class, and does not mean imposing more taxes on the consumption of goods and services that affect society as a whole.

Multilateral organisations, particularly the IMF, should learn from this democratic exercise of multi-sectoral agreement. It is not with ‘austericidal’ and technocratic recipes that countries like Costa Rica can confront the current situation whilst preserving progress in terms of social protection and guaranteeing universal and high-quality public services.

If the IMF was really changing its paradigm, it would expand its emergency support without conditionality or recommendations that later turn into restraints for countries like Costa Rica, make progress in meeting the global demand for the issuance of Special Drawing Rights (SDRs), and more importantly, abandon its orthodox belief that debt adjustment and fiscal deficit reduction are the only way out of a crisis like this one. The pandemic has shown that the orthodox path of budgetary austerity and restrictions in social investment only brings greater social conflict. We demand that multilateral organisations and specifically the IMF acknowledge that the time has come to change their paradigm. Otherwise, history and the people will proclaim them as entities that act against the quest for the common good.

This article was translated from the original Spanish with the generous support of Latindadd.