How the wealthy world has failed poor countries during the pandemic

Paying for the pandemic and a just transition 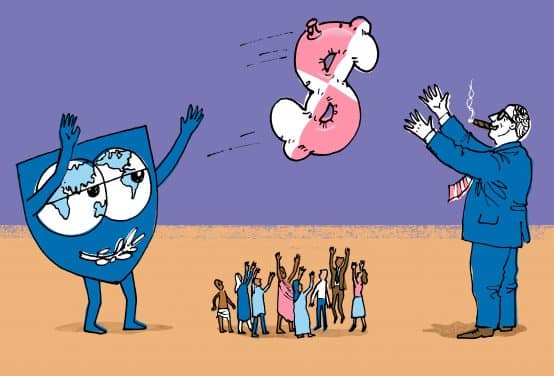 Ahead of the G20 Leaders’ Summit on 21 and 22 November, former UK Prime Minister Gordon Brown stated that, “despite the promises made by the G20, the IMF and the World Bank to stand behind them in their hour of greatest need,” the world’s poorest countries had “received only about a fraction of what they need in debt relief.” Brown was speaking at the launch event for a proposal for Debt Relief for a Green and Inclusive Recovery written for policymakers by a group of economists, including Kevin Gallagher and Stephany Griffith-Jones.

As the global debt crisis exacerbated by the pandemic deepens, the response from the G20 and international financial institutions, dominated by wealthy, creditor countries, risks wreaking further havoc on the economies of countries in debt distress. As well as directly hampering health and other vital public spending during the pandemic, debt repayments look set to undermine any hopes of a just recovery, especially for countries that have already experienced severe social spending cuts from servicing debt prior to the pandemic.

On 13 November, G20 finance ministers published the much-anticipated ‘Common Framework for Debt Treatments’ (see Dispatch Annuals 2020). The framework follows the G20 debt standstill announced at the World Bank and IMF Spring Meetings in April, which allowed for the postponement of debt repayments from 73 eligible low-income countries (see Dispatch Springs 2020). This standstill, called the Debt Service Suspension Initiative (DSSI), originally agreed until the end of 2020, was extended to mid-2021 at the World Bank and IMF Annual meetings in October (see Dispatch Annuals 2020).

"You, the IMF, are standing by the bank with your arms folded and I’m screaming to you, help me, I’m drowning. And then you say to me, oh, we’ll help you when you come out of the water.”Bwalya Ng’andu, Zambian minister of finance

Rather than merely postponing debt servicing like the DSSI, the common framework was the G20’s supposed attempt at dealing with the more complex issue of restructuring and reducing debt burdens. To this effect, it allowed for debt write-offs “in the most difficult cases”, but clearly stipulated that this should be avoided: “In principle, debt treatments will not be conducted in the form of debt write-offs.”

Yet, in most cases under the common framework, creditors were encouraged to merely change payment terms, which UK-based civil society organisation (CSO) Jubilee Debt Campaign (JDC) remarked was, “similar to the current suspension scheme,” adding, “It mainly kicks the can down the road, creating a future debt problem.” Iolanda Fresnillo of Belgium-based CSO network Eurodad called the framework “absolutely insufficient”, adding that it, “merely offers reprofiling of debt payments for the limited number of countries already included in the G20 DSSI.”

Countries seeking debt restructuring through the framework will be required to submit proposals that are subject to a Debt Sustainability Analysis (DSA), conducted jointly by the IMF and World Bank. These assessments have already been criticised for their over-optimistic forecasts during the pandemic (see Observer Autumn 2020). DSAs are also the subject of long-standing criticism for disregarding countries’ human rights obligations, climate commitments and other sustainable development goals, including from the United Nations Conference on Trade and Development (see Observer Winter 2017).

The common framework also lets “private lenders off the hook again”, according to JDC, making little progress on addressing the issue of private creditors, who increasingly hold significant amounts of developing country debt but refused to participate voluntarily in the DSSI. Without this participation, bilateral debt relief offered to countries will be drained from the Covid response and used instead to pay private creditors. Professor Daniel Gabor of the University of the West of England Bristol highlighted that bondholders’ “chutzpah” is down to G20 leaders and their central banks, who have “nurtured” private finance to become so powerful that they now find themselves unable to curtail its might. Though private creditors were encouraged to participate and ensure “fair burden sharing” in the framework, it is up to the country in debt distress to take up the near-impossible task of persuading its private creditors to grant debt relief. Rather than a comprehensive approach, debt treatment will be conducted on a country-by-country basis.

Zambia, which defaulted on its sovereign debt in November, tried this approach to no avail.  The Zambian minister of finance put this experience bluntly in an interview with US-based media organisation Bloomberg on 16 November: “Imagine being us; a man drowning in a fast-flowing river. And you, the IMF, are standing by the bank with your arms folded and I’m screaming to you, help me, I’m drowning. And then you say to me, oh, we’ll help you when you come out of the water.”

Also missing from the framework is a requirement for multilateral lenders to participate. Despite much talk from World Bank President David Malpass about the need for private creditor participation in debt relief efforts, the World Bank, dominated by the US, Japan and European shareholders, is still not providing relief on its own loans. While the IMF is providing debt relief on some of its loans through its Catastrophe Containment and Relief Trust, this is being financed with external donor resources, which could be used to support countries’ Covid-19 responses (see Dispatch  Annuals 2020; At Issue Summer 2020).

A major feature of the common framework is that countries seeking debt restructuring under it will now be obligated to sign up to an IMF loan programme. IMF financing could be made available to countries while they are in arrears to private creditors, as long as they continue to negotiate in ‘good faith’. While this can theoretically strengthen countries’ negotiating position towards private creditors, it seems unlikely to materialise in practice.

This change also raises serious concerns about the IMF’s broken policy prescriptions and its power to impose conditions on developing countries in order to meet stringent fiscal consolidation targets (see Observer Autumn 2020). The IMF is currently in talks with Kenya, which, like many other countries in debt distress, did not join the DSSI over concerns that doing so would downgrade its credit rating (see Dispatch Annuals 2020). The negotiations centre on a $2.3 billion loan programme over three years, the same time period in which the country will be expected to repay $2.3 billion to external private lenders. It seems Kenya has little choice but to use the IMF loan to bail out its private creditors, likely shifting the burden of fiscal consolidation, for example through regressive taxes hikes already pushed by the IMF, onto the most marginalised (see Observer Summer 2020).

Hodgepodge responses instead of sustainable solutions

The prominent role given to the IMF and World Bank in the common framework is indicative of yet another disjointed, temporary fix designed without representation of those most impacted, while further cementing the role of the G20 as a permanent fixture in the global financial architecture. It moves even further away from longstanding CSO calls for a comprehensive multilateral framework for debt crisis resolution under the auspices of the United Nations, which would restructure debt through a fair and transparent process in which all countries have an equal say.

Others in the debt justice community, like Eric Toussaint of Committee for the Abolition of Illegitimate Debt have pointed to the need for debt cancellation based on debt audits to identify illegitimate, odious and illegal debt.

In response to the common framework announcement, civil society network Afrodad stated, “We call on the G20 to impress on itself with great urgency the need to come up with a Sovereign Debt Restructuring Mechanism (SDRM) that enshrines the 2015 UN principles and provides a lasting solution to indebtness of African countries.”

As long as creditor countries continue to call the shots, this seems highly unlikely.

How the wealthy world has failed poor countries during the pandemic

Paying for the pandemic and a just transition