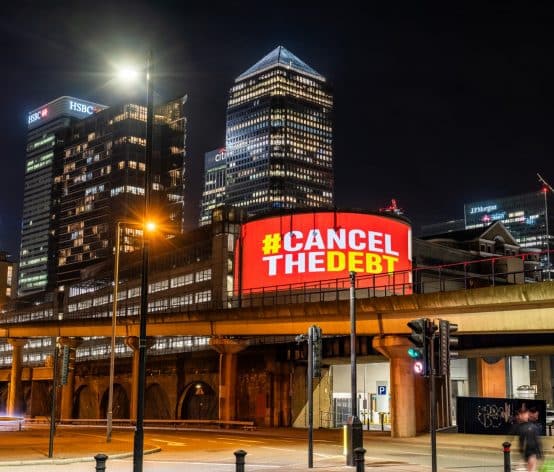 Cancel the Debt coalition demands debts for low and middle income countries are cancelled, as Africa spends three times more on debt repayments to banks and speculators than it would cost to vaccinate the entire continent against Covid-19, London, 2020. Credit: Robin Prime.

In February, the IMF executive board approved a new framework for assessing debt sustainability for countries that have significant access to international capital markets, following a two-and-a-half-year review. IMF debt sustainability determinations directly impact the scale of lending by the IMF, World Bank and other multilateral development banks, and influence lending decisions by governments and the private sector.

The new framework was designed to more clearly predict when countries are experiencing ‘stress’ in relation to their debt obligations and it includes a number of analytical upgrades, such as the ability to consider multiple time-horizons and account for a broader set of country-specific characteristics. The new framework also considers the long-run public finance consequences of climate change. It is expected to become operational at the end of 2021 or early 2022, after a guidance note on its implementation is developed.

Despite the methodological improvements, the review did not address long-standing civil society concerns that IMF debt sustainability assessments only narrowly consider a country’s ability to pay its creditors, without taking into account how servicing debt might undermine its ability to meet the needs of its people and international human rights obligations.

The IMF lending decision-making process has become more opaque. The lack of transparency allows the Fund to continue to lend into unsustainable situations.Daniel Munevar, Eurodad

The failure of this approach has been magnified by the crises triggered by the Covid-19 pandemic, as international responses have relied on IMF debt sustainability determinations to assess the need for debt restructuring and additional lending (see Observer Winter 2020). While the IMF assessed 76 of 80 countries that received emergency financing in 2020 to have “sustainable” debt levels, in most cases, that assessment relied on countries implementing severe austerity measures over the coming years. This raised the alarm among civil society organisations who warned of the devastating human toll of yet another wave of austerity measures amidst unfolding health, care and humanitarian crises (see Observer Autumn 2020, Observer Winter 2019).

In a briefing prepared for the EU Sub-Committee on the IMF in November, civil society organisations (CSOs) noted that under the current methodology, “without additional financial support and substantial debt relief, attempts to stabilize debt levels will result in countries having to abandon the active pursuit of the 2030 Agenda, their international human rights obligations, the Beijing Declaration and the commitments of the Paris Agreement on Climate Change.”

While the review enhanced countries’ debt data disclosure requirements, the thresholds for determining sustainability were kept confidential by the IMF, citing market sensitivity. According to Daniel Munevar with Belgium-based civil society network Eurodad, “The IMF lending decision-making process has become more opaque. The lack of transparency allows the Fund to continue to lend into unsustainable situations.” IMF debt sustainability analysis has long-been criticised for allowing political considerations to bias the Fund’s lending decisions in favour of its larger shareholders, leading the IMF to lend irresponsibly to governments with unsustainable debt burdens, such as in Greece in 2010 and in Argentina in 2018 (see Observer Autumn 2019, Spring 2015). In a recent CSO dialogue with IMF officials, UK-based Jubilee Debt Campaign pointed out that, unlike the process for lower-income countries where the thresholds are public, this opacity also means that other creditors are left in the dark about the terms of a bailout if debt becomes unsustainable, thereby missing an opportunity to disincentivise them from risky lending.

On blog site, The General Theorist, former IMF staffer Chris Marsh concluded that the review failed to initiate a fundamental rethink of the IMF’s approach to debt sustainability, “allowing the institution to stumble from crisis to crisis without learning from their mistakes and analytical blind spots.”