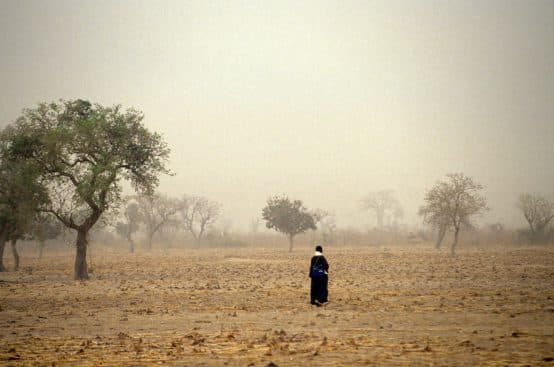 At the One Planet Summit for Biodiversity on 11 January, World Bank President David Malpass announced a major new World Bank Group financing commitment in Africa’s Sahelian drylands, which adjoin the southern edge of the Sahara desert, totalling $5 billion over the next five years.

As the Bank’s press release noted, the investments will ostensibly serve, “to help restore degraded landscapes, improve agriculture productivity, and promote livelihoods across 11 African countries on a swathe of land stretching from Senegal to Djibouti.”

The investments are embedded in a larger initiative – the Sahel’s Great Green Wall, which was first announced in 2007. The Bank’s new commitment was part of $14 billion pledged to the Great Green Wall initiative at January’s One Planet Summit by France and other donors.

Too often, decisions are made on a map in a far-away office about an area deemed to be empty and suitable for re-greeningIan Scoones, Institute of Development Studies, and Camilla Toulmin, International Institute of Environment and Development

As noted in a January blog by Ian Scoones of the UK-based Institute of Development Studies and Camilla Toulmin of the International Institute of Environment and Development, the initiative is certainly “grandiose” in scale: “Stretching across 8000 kms and 100 million hectares,…the advancing deserts of the Sahara are to be rolled back through the planting of trees and greening of landscapes across the Sahelian region. …Visible from space and pronounced a wonder of nature, the symbolism of a wall reversing environmental degradation, quelling insurgency and conflict and stemming the flow of migrants is dramatic.”

However, important questions remain about the underlying development rationale of the initiative, which have been echoed by findings from the Bank’s own Independent Evaluation Group (IEG) in its evaluations of existing Bank investments in the Sahel.

The Great Green Wall: A continuation of the colonial (mis)interpretations

As Scoones and Toulmin outline, scientific theories regarding the Sahara’s southward expansion first emerged during the European colonial era – and were later proved erroneous. They note, “in 1934 colonial scientist…E.P. Stebbing first claimed that the Sahara was expanding year on year. This was based on faulty analysis, but at the time it fed into the doomsday idea of environmental degradation.…Huge efforts were made in top-down soil conservation measures along with the regulation of farming and livestock-keeping populations.”

The narrative of southward-spreading desertification in the Sahel has persisted, often providing the rationale for foreign-funded interventions. However, as Scoones and Toulmin point out, an emerging body of evidence shows that the Sahel defies such simplistic explanations: “Dryland degradation emerges through a complex interaction of processes, and does not expand in a single direction. Satellite imagery and archaeological evidence from these dryland regions show wet and dry periods, with the greening and drying of landscapes occurring in phases over time. These are highly variable settings, where attempts at stability and control are futile, and livelihoods are best served through diversification, risk spreading and mobility.”

A January blog by the IEG provided an overview of its evaluations of the Bank’s involvement in the Great Green Wall to date, via the Sahel and West Africa Program in Support of the Great Green Wall Initiative (SAWAP). While not an evaluation of all of the World Bank-funded projects under SAWAP, IEG presented the sample as indicative of some of the lessons learned from the initiative thus far.

While the IEG stated that SAWAP has been a “technical success”, apparently increasing vegetation cover and resulting in land rehabilitation in project sites, this comes with the caveat that, “a precise understanding of the change in vegetation cover across the Sahel, attributable to donor investments in the Great Green Wall, has been limited because of an underinvestment in measurement (e.g. a normalized difference vegetative index to measure the change in vegetation, recommended through a regional project by the World Bank at the beginning of the SAWAP, was never implemented). And, importantly, none of the World Bank projects estimated the effect of changing rainfall patterns on the greening effects.”

The IEG also highlighted other issues with World Bank-financed SAWAP projects. These included, “the use of area enclosures – a land management practice that seeks to restore degraded land by excluding livestock and humans from openly accessing it in the short to medium term – [which] runs the risk of exacerbating vulnerability” of those reliant on communal lands.

The blog added that, in some cases, projects are worsening localised inequalities: “Increasing the value of degraded land, as was done by the Great Green Wall initiative, changes the decision-making calculation of land users – with enhanced farm value, these lands can be predated upon by elites, and can lead to encroachment by non-traditional farmers which risks displacing the local population.” It continued, “Because land restoration mainly benefits those that have access to land, some women and youth are especially disadvantaged in the Sahel.”

Greening the Sahel from below?

The IEG’s evaluations show the potential pitfalls of the Great Green Wall initiative – including the danger that a fixation with big-ticket funding commitments and tree-planting targets may ride roughshod over delicately balanced local practices of land use in the Sahel undertaken by farmers, pastoralists, and others.

As Scoones and Toulmin stressed, “Climate change can become a catch-all explanation for failures in governance, while in the Sahel security and counter-terrorism agendas can get wrapped up with development.…Too often, decisions are made on a map in a far-away office about an area deemed to be empty and suitable for re-greening.”

They conclude, “A focus on regenerating landscapes and promoting livelihoods through a sensitive, locally based approach to sustainable development is the way forward, and likely will cost less than $14 billion.”

In an op-ed for Thomson Reuters Foundation on 3 March, Wanjira Mathai and Salima Mahamoudou of the World Resources Institute echoed this sentiment, arguing, “the magic that can restore Africa’s degraded farms, forests, and pasture is in the millions of local champions across the continent, especially youth and women.”