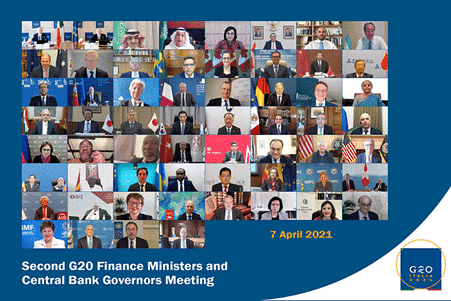 The Group of Twenty (G20) is an informal forum of the world's major economies that discuss global financial and development issues. The G20 is made up of 19 countries and the European Union. The 19 countries are Argentina, Australia, Brazil, Canada, China, Germany, France, India, Indonesia, Italy, Japan, Mexico, Russia, Saudi Arabia, South Africa, South Korea, Turkey, the United Kingdom and the United States. Since December 1st 2020, Italy holds the Presidency of the G20, which is annually rotated amongst its members.

The communiqué of the G20 finance ministers and central bank governors was released on 7 April and serves as a useful illustration of the failures of the international response to the Covid-19 pandemic. At a time when the growing divergence between the Global North and South in pandemic recoveries is becoming more stark, the G20 is not living up to its promise to “spare no effort” to protect lives and support the global economy. This is most obvious in its failing to make available the substantial financing required by developing economies to overcome the crisis, with the IMF now estimating that low-income countries will need to deploy around $450-$550 billion over the next five years to respond to and recover from the pandemic.

A key way the G20 can do this is by offering debt cancellation and developing a robust mechanism to compel private creditors to do the same. Yet, the communiqué outlined that the G20 could, once again, only agree to extend the Debt Service Suspension Initiative (DSSI) by six months, through the end of 2021, stipulating this would be its final extension. This temporary debt suspension has allowed 46 countries to defer $12.5bn in repayments so far, while the final extension is estimated to cover an additional $9.9 billion in official bilateral debt payments – all of which will still need to be repaid in full over a maximum of six years. The decision to provide another DSSI extension and seemingly arbitrarily ending the initiative this year therefore continues to kick the debt crisis can down the road, fails to include private creditors, and is not based on the needs of developing economies. In response, a number of civil society organisations and expressed their dismay at the failures of the G20 on debt, including the Jubilee Debt Campaign, Oxfam, Eurodad, Jubilee USA, Save the Children, and others reinforcing calls of the debt justice community for a new Financing for Development Conference where the issue of global economic architecture is firmly on the table.

Another way the G20 could make the financing available needed by the most vulnerable countries that would effectively be cost-free is through a substantial allocation of Special Drawing Rights (SDRs), the IMF’s reserve asset (see Background, Special Drawing Rights). After the decision was held up for a year by the US Trump administration, the G20 finally signalled its support for a new allocation in February and specified in this communiqué that the IMF should make a proposal for a $650 billion allocation. While that decision has been broadly welcomed, Belgium-based CSO network Eurodad estimates that low-income countries would receive only around $7 billion of an allocation that size, which is why over 250 civil society organisations and academics have called for an allocation worth $3 trillion, based on the needs of the most vulnerable countries, rather than the particular realities of the current US political machinery (see Observer Springs 2021). The communiqué also invited the Fund to explore options for members to channel unused SDRs to the benefit of vulnerable countries, but fell short of making any concrete commitments on that front.

G20 countries have privatised the medical knowledge behind Covid vaccines, artificially limiting supply and preventing most of the world producing the vaccines we so desperately need. They should have taken this moment to commit to putting the health of people across the world ahead of Big Pharma’s profits.Daniel Willis, Global Justice Now

Other avenues the communiqué outlined aimed at responding to the dire global financing needs included welcoming advancing the 20th replenishment cycle of the International Development Association (IDA20), the World Bank’s low-income country arm by one year (see Observer Springs 2021) and calling on the World Bank to scale up its efforts to mobilise private financing. It also called on the IMF to explore additional options to mobilise resources from its members to support vulnerable countries. The elephant in the room being that the G20 makes up the IMF’s largest shareholders, meaning there won’t be much for the IMF to ‘explore’ if the members of the G20 don’t make commitments to provide additional resources themselves. The fact that the world’s largest economies are relying on incentivising private finance to come to the rescue is also a foreboding illustration of how powerful the financial sector has become in development in what has been termed ‘the Wall Street Consensus’.

In another stark example of the chasm between the G20’s rhetoric and its actions, the communiqué described Covid-19 immunisation as “a global public good” and committed to facilitating the equitable and swift access to safe, effective and affordable Covid-19 vaccines. In reality, major G20 members, including the US and UK, have either actively opposed or sat on the fence on a South Africa and India-led proposal at the World Trade Organization (WTO) calling for a temporary suspension of vaccine-related intellectual property rights, which have kept production limited to a handful of pharmaceutical companies registered in the Global North (see Observer Springs 2020).

Daniel Willis of Global Justice Now responded that, “G20 countries have privatised the medical knowledge behind Covid vaccines, artificially limiting supply and preventing most of the world producing the vaccines we so desperately need. They should have taken this moment to commit to putting the health of people across the world ahead of Big Pharma’s profits.” Oxfam’s Anna Mariott described this move by G20 countries as a “bizarre act of financial and economic self-harm…[that] totally beggars belief.”

As the first G20 spring meetings statement of the Biden administration, the communiqué is also helpful in illustrating the US’ continued disproportionate influence in global economic affairs. The latest communiqué did not belabour trade issues amidst a US-China trade-war for instance, as previous iterations had and reverted to a more concise commitment to fight protectionism.

After G20 statements during the Trump administration largely avoided climate issues, this communiqué slightly sharpened its language on tackling climate change, announcing that the G20’s Sustainable Finance Study Group, led by China and the US, will be upgraded to a working group, reflecting the prominence of the climate agenda in the Biden administration. In 2021, the working group will develop a climate-focused G20 sustainable roadmap and work to improve sustainability reporting, identify sustainable investments, and align international financial institutions’ efforts with the Paris Agreement. In relation to climate change, the communiqué also emphasised improved data collection and tasked the IMF and Financial Stability Board to close climate data gaps.

The communiqué also urged the G20/OECD Inclusive Framework on Base Erosion and Profit Shifting (BEPS) (that actually continues to exclude most countries) to achieve an agreement by mid-2021 on its ‘unified proposal’ (on which countries are actually not unified).

Finally, as it does in all its communiqués, the G20 reiterated its commitment to continue the process of IMF governance reforms. After the US blatantly blocked the 15th IMF quota review in 2019, the process now falls under the 16th General Review of Quotas, slated to be completed by December 2023, which will include a new IMF quota formula (see Dispatch Springs 2021, Observer Winter 2019). Perhaps ambitious proposals for a quota formula that democratises IMF decision-making, which is long overdue, could play a part in breaking away from this inadequate deadlock of global economic governance that is failing to deliver the transformative responses required at this time of crisis.