‘Rebuilding better’, but better for whom? 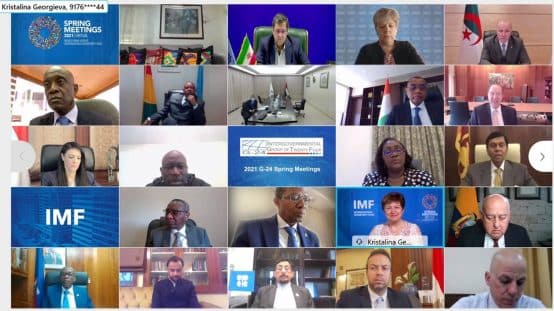 The G24 is a grouping of some of the most influential developing countries in the World Bank and IMF. It includes G20 countries such as India, Argentina, Brazil, Mexico and South Africa, as well as low-income countries with less influence over the institutions. The G24 communiqué is traditionally the first statement of the IMF and World Bank Annual Meetings. This year, the G24 ministers met virtually on 5 April.

The communiqué of the Intergovernmental Group of Twenty-Four on International Monetary Affairs and Development (G24) for the 2021 IMF and World Bank Spring Meetings, released on 5 April, focused on the divergent recovery paths between developed and advanced economies from the economic crisis triggered by the Covid-19 pandemic, as starkly highlighted by the IMF’s World Economic Outlook, published on 23 March.

Compared to the parade of Spring Meetings events cheering on progress towards a “green and inclusive recovery”, the G24 had a more sobering take: “The path to broad-based and inclusive recovery is…fraught with uncertainty about the availability and access to safe and affordable vaccines for all and the strength of external financial support to developing countries.”

It stressed that, “severe fiscal constraints and heightened debt vulnerabilities imperil our ability to contain the pandemic and invest to build back our economies in an inclusive, resilient and sustainable manner.”

For the bloc, now is the “critical juncture” to take action to support “a strong pace of global convergence of per capita income levels between advanced and developing countries.”

The G24 did not shy away from underlining that developing countries are disadvantaged by the geopolitics of the Covid-19 crisis, both in terms of vaccine access and financing. The communiqué noted that though, “large stimulus packages in advanced countries cushioned the global impact of the pandemic”, financial support for developing countries had fallen significantly short of developing countries’ $2.5 trillion in financing needs.

In order “to avoid prolonged damage”, it stated that, “We call on the IFIs, especially the IMF and the World Bank, in coordination with the international community to ensure the availability, to the fullest extent possible, of the necessary liquidity and fiscal support for all developing countries.”

Like the last communiqué, released alongside the 2020 Annual Meetings (see Dispatch Annuals 2020), the G24 once more called for a new allocation of the IMF’s Special Drawing Rights. It stated, “We welcome the stronger support in the IMF’s Executive Board for a meaningful new allocation of Special Drawing Rights (SDRs) to address long-term global liquidity needs,” though it stopped short of proposing a figure for the new allocation, which was announced by the G20 the following day (see Dispatch Springs 2021).

Looking ahead, the G24 called on the IMF to consider “precautionary financing instruments”, and to remove limits for its members to access financing over certain thresholds. It made a plea to the IMF to explore funding options to increase its Poverty Reduction and Growth Trust resources and to “find the means” to increase its budget more generally, implying that this is the only way it can fulfil its mandate.

Alongside its call for greater financing from advanced economies for the Covid-19 Vaccine Global Access (COVAX) initiative, it argued for a move towards patent liberalisation for COVID-19 vaccines to boost manufacturing and allow developing countries to kick-start their own vaccine manufacturing. Notably, the communiqué stopped short of endorsing the demand by 100 countries, including all of the G24 countries except for Brazil, for a waiver of some aspects of the Trade-Related Aspects of Intellectual Property Rights (TRIPS) Agreement, which would support this (see Observer Spring 2021).

The G24 communiqué also took aim at the IMF’s surcharge policy, which stipulates that borrowing countries have to pay an additional charge on top of interest rates and called on the Fund to “correct the regressive and pro-cyclical character” of the policy.

It urged the IMF to suspend surcharges during the pandemic to support economic recovery, no surprise given that countries are estimated to have to pay $4 billion in surcharges on top of interest payments and fees from the beginning of the crisis through to the end of 2022.

This comes as the Fund undergoes a periodic review of its surcharges and IMF Managing Director Kristalina Georgieva promised that members would discuss the policy, after G24 member Argentina requested lower rates.

Responding to the announcement of the G20’s Common Framework for Debt Treatments in October 2020, the G24 welcomed the framework, but stated that ”effective implementation” required moderating reactions of market and credit rating agencies, which had thus far deterred many countries from using it (Observer Winter 2020). Once again, the bloc reiterated its support for an international sovereign debt resolution for debt treatments, a clear indication that it views the current G20 debt initiative as insufficient.

The G24 has long agitated for IMF quota reform to give developing countries and emerging markets a greater share of quotas. The IMF’s 16th General Review of Quotas is now underway and is slated to be completed by December 2023. G24 member India is publicly calling for coordination between BRICS countries on the review, but it remains to be seen whether the review will meaningfully redistribute decision-making power in the institution to those that remain structurally underrepresented.

The road to inclusive recovery is green

The communiqué was clear in its support for advanced economies to deliver on climate finance, in particular for wealthy countries to meet broken promises of $100 billion annually by 2020 “at the earliest possible time” and increase support for the “meager” adaptation finance mobilised to date. It emphasised that this was the only “critical and fair” way for developing countries to meet climate goals, as countries struggle with the economic burden of the pandemic. This comes as the World Bank has been found to have overreported its own adaptation climate finance, according to civil society research (see Observer Spring 2021).

The G24 expressed the importance of the World Bank and other multilateral development banks (MDBs) balancing their approach to climate objectives and sustainable development goals, and considering countries’ current economic structures. It urged MDBs and the IMF to “articulate better the elements of their assistance strategies, within their comparative advantages and in line with their mandates, to support developing countries of diverse circumstances transition to more inclusive and sustainable economies.”

‘Rebuilding better’, but better for whom?