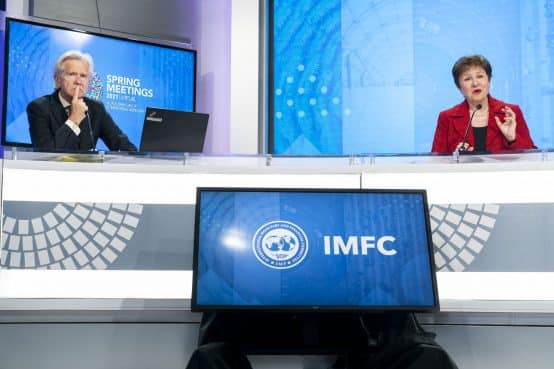 The communiqué of the 43rd meeting of the International Monetary and Financial Committee (IMFC) was issued on 8 April, during the World Bank and IMF Annual Meetings, which took place virtually. The IMFC is the direction-setting body of finance ministers and central bank directors for the IMF. The communiqué of the IMFC usually sets out the consensus position about the direction of the Fund and key reforms. Individual ministerial statements to the IMFC, often revealing of the true differences of opinion amongst the IMF’s membership, are also made available online. The next IMFC meeting is expected to be held on 14 October 2021.

As has become customary, the IMFC communiqué released on 8 April was somewhat overshadowed by the G20 communiqué released the previous day (see Dispatch, Spring Meetings 2021). Reflecting both the broader consensus achievable amongst G20 members and the de facto greater influence of that body, the IMFC communiqué was less than a third of the length of its G20 counterpart. Irrespective, the IMFC communiqué, released under the leadership of newly appointed IMFC chair Magdalena Andersson, included a tepid response from the IMFC to concerns over private sector involvement in debt suspension initiatives, an absence of engagement on gender issues, and the divisions amongst members over IMF quota reforms.

As the IMF noted in its recently published Fiscal Monitor and the World Economic Outlook, the IMFC observed that the global economy is recovering faster than had been estimated last October, owing to the “unprecedented policy response and rapid progress in vaccine development.” Caveats on the improved outlook cited include the “varying policy space” available to countries, “pre-existing vulnerabilities”, and uneven access to vaccines – a list that implicitly acknowledges the divergent recovery paths of most advanced economies on the one hand and most middle- and low-income countries on the other, something made explicit in the WEO.

The communiqué includes a warning of future economic risks, “should global financial conditions tighten swiftly.” This appears to be a nod to the concerns of some that the domestic monetary policies of advanced economies – especially the US – could have significant negative repercussions globally. The Governor of the Central Bank of Hungary accordingly noted in their statement that “central banks in major advanced economies should pay due attention to their policy decisions’ spillover effects.” Similarly, the Russian Minister of Finance argued that “such tightening of global monetary conditions may lead to capital outflows and downward exchange rate pressures in emerging market economies.”

The unspoken elephant in the room for the last two IMFC communiqués had been Special Drawing Rights (SDRs), the international reserve currency held by the IMF (see Dispatch Annual Meetings 2020; Background, Special Drawing Rights). With the US now in favour of a new SDR allocation for IMF members, having previously blocked such action under the Trump Administration, it was no surprise to see SDRs addressed in this communiqué. The IMFC echoed the call from the G20 for an SDR allocation of $650 billion and reiterated the need to “enhance transparency and accountability” in the use of SDRs. Implicit in the remarks is US’ reluctance for SDRs to support countries that it has tensions with, and a debate around what countries should be using their SDR allocations for – purely to bolster reserves or to boost liquidity and spending. In the ministerial statements, it was the representatives of the US, Europe, Russia, and Central America who made remarks on SDR transparency.

The other pressing topic on SDRs – the reallocation of the SDRs of advanced economies – was also acknowledged by the IMFC, noting that the IMF should “continue exploring ways for voluntary post-allocation channelling of SDRs to support members’ recovery efforts.”

The IMFC mentioned, for the first time during the pandemic, the World Health Organization (WHO) and the COVAX Facility. This connects to the IMF argument, common throughout these Spring Meetings, that accelerated vaccine production and roll-out is essential to the economic recovery, with the IMF noting that faster progress on ending the health crisis could, “raise global income cumulatively by $9 trillion over 2020–25.”

The IMFC stopped short, however, of supporting a waiver of some elements of the Trade-Related Aspects of Intellectual Property Rights (TRIPS) Agreement to facilitate increased production, something requested by South Africa and India, but that advanced economies have been wholly reluctant to support (see Observer Spring 2021). It was only the Minister of Economy for Brazil, representing eleven Latin American countries, who sought in their statement to push the conversation further, calling for international actors to incentivise “technology transfer and voluntary licensing of intellectual property” for vaccines.

On debt relief, it is perhaps surprising that the communiqué does not mention the recently announced extension of the G20 Debt Service Suspension Initiative (DSSI), limiting its comment to the continued support for its implementation and for the Common Framework (see Observer Winter 2020). One of the major current issues around debt relief initiatives is the absence of private creditor participation. The IMFC’s communiqué during the Annual Meetings last year had been clear in its disappointment in “the absence of progress on private creditors’ participation in the DSSI”, but similar remarks were absent this time around.

Instead, on private sector involvement in debt relief, the IMFC seems content to rely on the comparability of treatment principle, stating “we will facilitate swift debt treatment together with broad participation by official and private creditors in line with the comparability of treatment principle.” The principle, which is required in the Common Framework, establishes that debtors must seek from other creditors, including private creditors, a treatment at least as favourable as the one agreed under the Common Framework. It has been cited as a tool to counter private sector absence in debt relief conversations by IMF representatives over the course of the Spring Meetings.

This includes Jeromin Zettelmeyer, IMF Deputy Director of the Strategy Policy and Review Department, who nevertheless conceded in a civil society event on debt that the principle is ultimately a “soft tool.” Despite such admissions, the principle was highlighted favourably in the ministerial statements of the USA, China, Italy (representing six countries), the EU, and Belgium (representing 16 countries). This suggests that it is unlikely that more ambitious avenues to force private sector participation in debt relief efforts will be sought.

In some ways, this edition of the communiqué signaled a return to more conventional IMFC policy pronouncements, as economies looked ahead to the recovery from the pandemic. For example, the IMFC cited the importance of “preserving long-term fiscal sustainability.” Such remarks were a hallmark of pre-pandemic communiqués, but had been absent during the crisis. Civil society organisations have cited with alarm the potential wave of austerity measures likely to sweep the developing world in the wake of the crisis with support from the IMF, but such concerns were absent from the IMFC statement. Only the Russian representative voiced the view in his ministerial statement that “fiscal consolidation through spending reductions or tax increases may lead to slower growth and further deterioration of public debt-to-GDP ratios.”

Macro-structural issues, the term the IMF uses to refer to issues it considers critical to global stability but not necessarily part of its core mandate, featured in the IMFC communiqué, which noted that the IMFC “support the IMF in stepping up work to help its members identify and manage the macro-critical implications of climate change, digitalization, inequality, and fragility.” It further acknowledged that the crisis may exacerbate inequality and that challenges such as climate change are becoming “more pressing.” This language and attention to climate change, limited though it may be, is the most coverage that the subject has received in recent IMFC communiqués. The Governor of the People’s Bank of China commented “we also welcome the IMF to continue to focus on new trends such as… climate change.” During the IMFC press briefing, IMF Managing Director Kristalina Georgieva stated that, “we heard a very strong endorsement from our membership today on the role of the Fund with regard to climate change.”

Conversely, there was a notable and concerning absence in the discussion of macro-structural issues – gender. Consistently included in IMFC communiqués immediately prior to the pandemic, the subject is only mentioned by one representative in their ministerial statement (Mexico), exacerbating fears of women’s rights organisations that urgent gender equality issues are being pushed off the agenda amidst the pandemic response. This is troubling, especially considering that, as the United Nations noted in their statement to the IMFC, “Women have been disproportionately affected by the pandemic owing to pre-existing gender gaps in various labor market outcomes, including labor force participation and wages.” As the IMF picks up its surveillance and regular loan programmes in the recovery, civil society demands made of the IMF on women’s rights and gender equality in February 2019 remain as relevant as ever.

IMF reform: Tensions between BRICS and the advanced economies

Language around a possible IMF quota reform was, unsurprisingly, tepid. The IMFC statement read, “We remain committed to revisiting the adequacy of quotas and will continue the process of IMF governance reform under the 16th General Review of Quotas, including a new quota formula as a guide, by December 15, 2023.”

There was no direct suggestion, however, that the quota reform should address underrepresentation of smaller members of the IMF or that quotas should increase in size, despite remarks to that effect by certain ministers. Especially strong wording came from the Minister of Economy for Brazil, who called for a “substantial increase in the current size of the Fund” and fairer distribution of quotas, and the Minister of Finance for India, who was unambiguous in stating that “the failure of the 15th General Review of Quotas (GRQ) has been disappointing.” The South African Governor of the Reserve Bank (representing 23 countries) reiterated the “longstanding call” for a third chair for Sub-Saharan Africa at the executive board to strengthen their representation at the Fund. On the eve of the Spring Meetings, India had called on the BRICS countries for greater coordination on the issues of quota reform.

Advanced economies were notably more reticent on the subject in their ministerial statements. During the IMFC press briefing, Kristalina Georgieva stated that there is a “clear willingness” from all members to see the IMF adequately resourced “to do our job”, but noted that there are “complexities.”