Austerity and human rights in Ecuador: An urgent appeal to the IMF

Ecuador, COVID-19 and the IMF: how austerity exacerbated the crisis

Guess which policy your central bank will pursue, Dean Baker 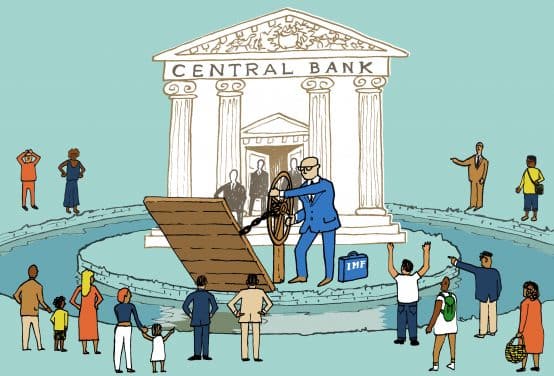 In April the Ecuadorian National Assembly approved a law greatly increasing the independence of Ecuador’s central bank. The move, which had been a point of acute tension during Ecuador’s presidential election earlier this year, was required by the IMF in order for Ecuador to access a $6.5 billion loan agreed in September 2020.

The “law for the defence of dollarisation” establishes legal and operational autonomy for the Central Bank of Ecuador (BCE), removing it from the direct authority of the finance minister, who previously headed a board which set the bank’s monetary policy and controlled its budget. The law – the decrees of which are now being implemented – will ban the BCE from financing government spending, buying public sector debt, and investing in public or private businesses.

The IMF has emphasised the central bank reform, designating it as one of only two prior actions, a type of condition required for loan disbursement. The legislation was prepared with IMF technical support claiming it will align the BCE “with best practice in areas of governance, independence, objectives, transparency, and controls.” Central bank independence (CBI) had previously been part of the portfolio of reforms proposed by the IMF for Ecuador’s $4.2 billion loan in 2019, but was left unimplemented as the government was met with widespread protest and political opposition (see Observer Winter 2019).

So-called independent central banks are independent only of their parliaments and the people and, thus, fully in the pockets of the financiers and the broader oligarchyYanis Varoufakis

International and national civil society organisations (CSOs) and academics have responded with anger to the new law. A January statement from academics affiliated with Progressive International, a global mobilisation campaign, called it an “economic absurdity” to limit the government’s ability “to use their full range of policy tools”, adding that the law would facilitate “the outflow of capital from Ecuadorian private financial institutions.” Jameson Mencías, an Ecuadorian economist with the Latin American Network for Economic and Social Justice (Latindadd), commented that the reforms proposed in this law, “point to the protection of private banks and the liberalisation of financial flows, clearly confusing the defence of the monetary system with defence of the banking system”.

It is not just in Ecuador where the IMF has been pushing aggressively for CBI. Over recent months, it has featured prominently in IMF loan discussions with Ukraine, the Democratic Republic of Congo, and Mauritius. Over the last two decades, CBI has become a staple IMF policy and a major way in which it shapes global monetary policy.

The IMF and the rise of central bank independence

Central banks are the institutions responsible for managing a nation’s currency and monetary policy – i.e. the supply of money into an economy and the interest rates payable on borrowing. Contrary to popular opinion, their independence is a relatively recent policy practice, first emerging in the 1970s. Over the last 25 years there has been a “global rise” in CBI: academics note that in 2015, 81 per cent of countries had a CBI index score over 0.5 (on a scale of 0 to 1, where 1 represents full independence), compared to 12 per cent in 1980.

As widely acknowledged, the IMF has played a “vital role” in this global policy transition. Initially not a major feature of IMF conditionality or technical assistance, since the 1990s the Fund has increasingly called for various policies to boost CBI. The argument in favour of CBI is simple: it controls inflation by taking interest rate management out of the hands of short-sighted politicians. As IMF staff write, “if politicians manipulate monetary policy to bolster their pre-election popularity, their prioritization of short-term political gains could invite long-term pain for the economy, in the form of higher inflation or even hyper-inflation.”

This “political interference” – as the IMF calls it – involves governments pushing central banks to lower interest rates. This makes it cheaper for businesses to borrow and expand, thereby creating employment. This boosts governments’ popularity, but at the possible cost of inflation running out of control. The ‘interference’ also involves governments turning to central banks to fund their public spending, thereby raising public debt to unsustainable levels.

But despite its presentation as best practice, the process of increased CBI is highly contentious and can in fact be detrimental to development.

Critics have argued that taking monetary policy out of the hands of elected politicians is undemocratic. As economist and former Minister of Finance for Greece Yanis Varoufakis argues, “so-called independent central banks are independent only of their parliaments and the people and, thus, fully in the pockets of the financiers and the broader oligarchy.” While IMF staff have commented that CBI is aimed at “politics-free monetary policy decisions”, as Varoufakis suggests, removing government authority over central banks does not make them free of politics, only free of democratic accountability.

In a 2020 working paper, the Fund asked if central banks should consider inequality when taking decisions. Their inevitable ambiguity in answering such questions points to the core fallacy of the argument that central banks can be ‘politics-free’. Even establishment voices such as Foreign Policy now acknowledge that the “illusion” that monetary policy is “technical, not political” has been completely ended by the pandemic response, which has shown that central banks “hold the reigns of the global economy”.

It has also been argued that CBI enhances the power of the Fund, at the expense of national parliaments. Economist Bernhard Reinsberg observes that, by limiting policy options, “strengthening CBI helps the IMF in nudging a government into painful austerity and reform measures, ultimately leading to greater program compliance.” This reduced policy space makes countries less developmental. According to Daniel Munevar with Belgium-based civil society network Eurodad, “In practice, CBI becomes another binding constraint on the capacity of countries to use available policy space to pursue developmental policies.” Importantly, these curtailed tools – such as boosting employment via interest rate adjustment or financing domestic spending – were essential parts of the policy programmes that today’s rich countries used as part of their development policies.

The wave of CBI of recent decades has also had broader impacts. It has been shown that the rise of CBI directly leads to financial deregulation, as governments seek alternative policy tools to stimulate their economies. This has made them more open to financial shocks and increases the influence of private financial actors over government policy. Relatedly, a January World Bank working paper argues that CBI increases inequality by reducing fiscal policy space (making redistribution harder), increasing financialisation (which benefits asset holders), and weakening the bargaining power of workers.

The IMF must critically reassess its central bank policies if countries are to be given the space to prioritise the wellbeing of their citizenry over the interests of global finance. The pandemic has only exacerbated this tension. Economist Jayati Ghosh comments that, “All the myths of central bank independence have been blown sky-high by the pandemic – but only in the advanced economies. In the developed world, they realise fully that monetary policy has to be closely aligned with fiscal policy, and both have to be expansionary to support the economic recovery and protect citizens during this major crisis. But no such realisation is evident for developing countries, where the clearly wrong policies of fiscal austerity and so-called central bank independence are being thrust on to populations already hugely battered by the pandemic.” If countries like Ecuador are to respond effectively to the crisis they need more, not fewer tools to support development.

Austerity and human rights in Ecuador: An urgent appeal to the IMF

Ecuador, COVID-19 and the IMF: how austerity exacerbated the crisis

Guess which policy your central bank will pursue, Dean Baker