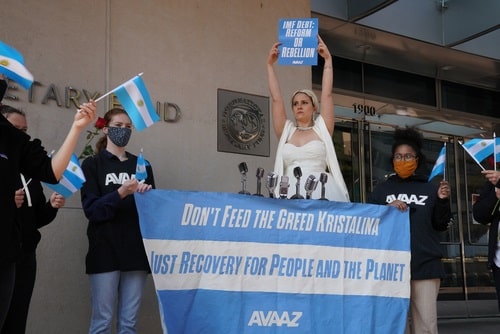 In May, former UN Independent Expert (IE) on foreign debt and human rights, Juan Pablo Bohoslavsky, wrote an open letter calling for an end to the use of surcharges by the IMF, as these extra charges constrain the ability of countries in the Global South to respond to the Covid-19 pandemic and meet their international human rights obligations during a worsening debt crisis (see Dispatch Spring 2021). Since the 1997 Asian financial crisis, the IMF has sought to “generate income to allow the Fund to accumulate precautionary balances” and to disincentivise countries from an over-reliance on IMF financing. It does this by penalising them for borrowing beyond their allotted IMF quota (see Observer Winter 2019) and for maintaining loans for prolonged periods by charging a premium on borrowing costs. These quota and time-based surcharges have become an important source of income for the IMF. As Professor Kevin Gallagher noted in a March article in UK newspaper Financial Times, “the IMF estimates the surcharges have become the Fund’s largest source of revenue, accounting for almost half of revenues” and contributing over $1 billion in income for fiscal year 2020. He warned that, “these surcharges can often lead to debt costs as much as tripling”, a grave concern as countries struggle to respond to the Covid-19 pandemic amid high debt levels (see Dispatch Spring 2021).

Echoing Professor Gallagher’s concerns, the open letter, co-signed by the current UN IE on debt and human rights and the International Trade Union Confederation, stressed that, “the same countries most in need of financial assistance will have to pay more than USD$4 billion in additional surcharges on top of interest payments and other fees from the beginning of the crisis to the end of 2022.” The letter noted that the surcharges are procyclical, discriminate among countries based on their economic strength and may therefore contradict international law.

The letter argued that surcharges may also contravene another core principle of international human rights law, because they prevent States from generating, adequately allocating, and making use of their maximum available resources to move as quickly as possible towards the achievement of the full realisation of human rights. It consequently calls on, “countries in the Global North to ensure, through their own contributions, that the IMF is adequately and equitably funded to undertake its mandated function.”

The same countries most in need of financial assistance will have to pay more than USD billion in additional surcharges...from the beginning of the crisis to the end of 2022Juan Pablo Bohoslavsky

The April communiqué of the Group of 24 major developing countries also called on the IMF to “correct the regressive and pro-cyclical character” of the policy (see Dispatch Spring 2021). In May, Bloomberg quoted Argentina’s President Alberto Fernandez as stating, “I expect its [surcharges] suspension during the pandemic. I hope the Fund’s board discuss this in its October meeting, and once and for all, eliminates them.” IMF Managing Director, Kristalina Georgieva responded in May that she, “took note of President Fernández’s request and…will consult with the membership on this issue.” Further commenting in May, IMF Director of Communications, Gerry Rice, underlined that “any review is the prerogative of the executive board”, adding that “surcharges are an important part of what we call our risk management framework.”