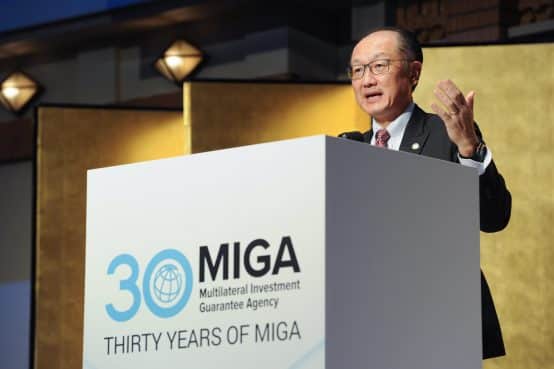 The Multilateral Investment Guarantee Agency (MIGA) forms part of the World Bank Group and promotes foreign direct investment in its 157 member countries. To this end, MIGA has provided political risk insurance since its inception in 1988. Initially, MIGA provided insurance for private companies investing in the Bank’s member countries in the form of guarantees against political risk, as well as advisory services, capacity building support, and mediation services. In this sense, its mandate was to make it less risky for foreign companies to invest in middle and low-income countries by covering potential risks with guarantees. In 2013, MIGA broadened its non-honouring of financial obligations coverage to include instances where state-owned enterprises failed to meet their financial obligations (for example, see Observer Autumn 2017).

MIGA is currently led by its Executive Vice President Hiroshi Matano, who was appointed in November 2019 (see Observer Spring 2020). Matano is the latest Japanese national to head MIGA – with Japanese nationals serving continuously in the Executive Vice President role since the organisation’s founding. This is a somewhat obscure, but important, footnote to the World Bank and IMF gentleman’s agreement – which has ensured that the World Bank’s president is a US national and the IMF’s managing director is a European for the duration of the Bretton Woods Institutions’ history (see ‘What is the ‘gentleman’s agreement?’). The US is MIGA’s largest shareholder, at just over 18 per cent, followed by Japan (5.06 per cent) and Germany (5.04 per cent).

MIGA states that it, “can provide insurance coverage for up to 15 years (in some cases 20), which may increase the tenor of loans available to investors.” MIGA also claims that its insurance can lower the borrowing costs for projects, as “MIGA-guaranteed loans may help reduce risk-capital ratings of projects.” Beyond political risk insurance, MIGA’s legal staff provide advice to member states on the negotiation of bilateral investment treaties and other investment-related issues. The agency may mediate disputes between states and investors not guaranteed by MIGA, if disputes “inhibit additional investment to the country” (see Observer Summer 2021). In such circumstances, MIGA seeks compensation for its mediation services.

In fiscal year (FY) 19, MIGA issued $5.5 billion in guarantees to cross-border private investors, its highest ever total; that total fell to $3.94 billion in FY20, as the Covid-19 crisis hit. In response to the Covid-19 pandemic, MIGA “launched a $6.5 billion fast-track facility to help private sector investors and lenders tackle the pandemic in low- and middle-income countries”. This allowed for the issuance of guarantees using streamlined and expedited procedures for various aspects of countries’ health- and economic-related responses to the pandemic. According to MIGA’s FY20 annual report, “As of August 2020, MIGA has provided US$2.6 billion for projects to mitigate the impact of the crisis in emerging markets and developing economies.”

MIGA has increasingly prioritised working in countries that are members of the International Development Association (IDA), the World Bank’s concessional lending arm, and in fragile and conflict-affected states (FCS). According to its FY20 annual report, “In FY20, MIGA issued US$1.7 billion in guarantees across 15 IDA-eligible countries. The agency also issued guarantees for US$495 million in support of projects in three FCS countries: Kosovo, Nigeria, and the Solomon Islands.” The report continues, “MIGA’s gross outstanding exposure in IDA-eligible countries and FCS has increased by 13 percent and 25 percent, respectively, since FY19.”

Room for improvement: Concerns around accountability and project selection

MIGA trumpets its environmental and social safeguard credentials, with its website stating that it “helps investors and lenders ensure that projects comply with what are considered to be the world’s best social and environmental safeguards” (i.e. the Performance Standards, which apply to both MIGA and its sister organisation, the International Finance Corporation, the World Bank’s private investment arm). However, a 2019 external review of the environmental and social accountability framework of the IFC, MIGA, and their independent accountability mechanism, the Compliance Advisor Ombudsman (CAO), made a number of recommendations pointing to the need for improvement in this area (see Observer Autumn 2020). In alignment with long-standing civil society demands, the review included the recommendation that IFC and MIGA should adopt the “contribute to harm, contribute to remedy” principle, as they currently lack a mechanism to provide remedy for communities harmed by projects benefiting from IFC or MIGA support. It also proposed that the IFC and MIGA actively engage with communities on the ground and attributed to them the responsibility for ensuring clients disclose the availability of the CAO to the communities impacted by the development projects they support.

Civil society organisations (CSOs) have also criticised MIGA’s guarantees for backing fossil fuel projects. Research by UK-based CSO E3G showed that MIGA had the ‘dirtiest’ portfolio in terms of support for fossil fuels projects between FY14-FY16 among the four members of the World Bank Group. In FY16, MIGA did not support a single renewable energy project: “[its] guarantees to energy were worth $1.9 billion in 2016, of which $0.9 billion went to fossil fuel projects,” with the rest going to projects such as hydro-dams, which often carry significant environmental and social impacts (see Observer Spring 2018). The World Bank’s newly published Climate Change Action Plan notes that MIGA, along with the IFC, will align with the Paris Agreement at a slower pace than the rest of the World Bank Group: 85 per cent of its ‘real sector operations’ will be aligned by 1 July 2023 (i.e. the start of FY24), with 100 per cent of its real sector operations becoming aligned two years later (see Observer Summer 2021). This has raised concerns from civil society organisations about MIGA continuing to provide insurance for non-Paris aligned projects in the interim period.

MIGA has also benefited from IDA’s $2.5 billion Private Sector Window (PSW), which was established during the IDA18 replenishment cycle in December 2016. Thus far, at least 14 projects have received support from the PSW, via the MIGA Guarantee Facility. The PSW has been criticised for utilising IDA’s balance sheet to subsidise IFC and MIGA’s activities.

The Bretton Woods Project's selection of the best books, reports and other resources on the World Bank and IMF from 2016.

The world awaits to see whether Trump’s defeat will result in the end of the 'America First' approach and a democratisation of the IMF and World Bank and the multilateral system.

While the Fund and Bank defended trade and globalisation, their rhetoric focused on the perils of inequality and need for inclusive growth

The Bretton Woods Project's review of the most important developments at the World Bank and IMF in 2016.

The World Bank is set to reappoint president Jim Yong Kim for another five year term, despite persistent concerns from Bank staff and renewed calls for a merit-based process based on principles of transparency and diversity.