The World Bank’s investments in the Great Green Wall: A desert mirage? 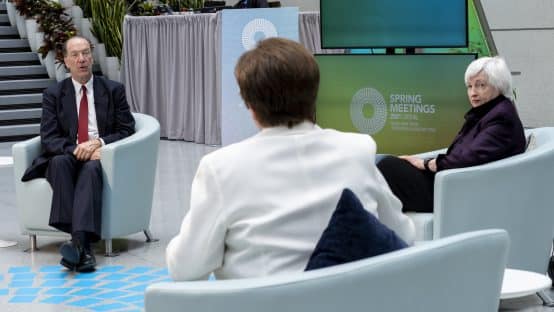 World Bank President David Malpass, far left, speaks at an event on the economic recovery at the World Bank and IMF Spring Meetings in April, where he highlighted that the World Bank's new Climate Change Action Plan was in development. Credit: World Bank.

The World Bank Group (WBG) published its updated Climate Change Action Plan (CCAP) for 2021-25 on 22 June, with the plan serving as its corporate strategy on climate change. Despite the CCAP noting that, “Our collective responses to climate change, poverty, and inequality are defining choices of our age,” civil society organisations (CSOs) expressed disappointment at the plan’s lack of detail in key areas.

On paper, the CCAP seeks to help countries and private sector clients transform key sectors in alignment with global climate goals, including through Country Climate and Development Reports (CCDRs), which “will be used to inform, prioritize, and sequence climate action through the country engagement process and thus implement the Action Plan.” The Bank aims to complete “up to” 25 CCDRs in the coming year, but it is unclear exactly how they will influence its investment decisions.

Furthermore, the plan notes that, “All investment in new gas infrastructure will be assessed for consistency” with countries’ national climate plans, but provides no explanation of this screening process. This lack of disclosure is concerning, as a June report from the International Institute for Sustainable Development (IISD) found the Bank provided 12 per cent of all G20 and multilateral development bank-related public finance for gas projects in developing countries between 2017-19. In March, over 150 CSOs and academics called on the Bank to phase out its support for fossil fuels and increase support for a just energy transition.

The Climate Change Action Plan allows the WBG to continue to expose the countries and communities it's mandated to support to the risks and harms of fossil fuel developmentLuísa Galvão, of Friends of the Earth US

“The Climate Change Action Plan allows the WBG to continue to expose the countries and communities it’s mandated to support to the risks and harms of fossil fuel development, including increasingly expensive and volatile energy prices, lock-in of obsolete infrastructure, stranded assets, illness, displacement, and a delayed and unjust transition,” said Luísa Galvão, of Friends of the Earth US.

The CCAP includes a target of 35 per cent of the Bank’s investments between 2021-25 being “climate-related” on average – a commitment blunted by a lack of transparency about how the Bank accounts for climate finance in its projects (see Observer Spring 2021). It affirms that the Bank will align most of its finance with the Paris Agreement by 1 July 2023 – with further details forthcoming at COP26 in Glasgow in November – putting a deadline on a process initially announced in 2018 at COP24 in Katowice, Poland (see Observer Spring 2019). However, the International Finance Corporation (IFC), the Bank’s private sector investment arm, and the Multilateral Investment Guarantee Agency (MIGA), the Bank’s political risk insurance arm, are working on a delayed timeline, with 100 per cent of their “real sector operations” to be aligned by 1 July 2025. The CCAP offers no deadline for the Paris alignment of IFC and MIGA’s financial intermediary (FI) portfolios, despite the IFC’s FI clients frequently being linked to new coal investments (see Observer Winter 2020).

The CCAP emphasises engaging the private sector in the Bank’s climate work, in line with its wider Maximizing Finance for Development (MfD) agenda, which privileges the private sector and exposes states to long-term fiscal liabilities (see Observer Summer 2017). It notes that, “public sector interventions can be focused on helping countries implement policy and regulatory reforms needed to create the right incentives to crowd-in private sector participants—including through upstream reforms—and to catalyze private sector investment, using our menu of advisory and financial instruments.”

There is a tension between these efforts and achieving a people-focused climate agenda that is based on a consultative approach to transforming key systems, in line with a just transition to a low-carbon future. As noted by economist Daniela Gabor in a June op-ed in UK-based newspaper the Guardian, private sector-led climate efforts have, “injustice and inequality built in,” and “often place the burden of decarbonisation on the poor.” Gabor argues that MfD privileges private sector profits, as “Government spending is…directed to ‘derisking’ private infrastructure, to cover the gap between the fees paid by users of essential public services and the commercial rates of return expected by private investors.”

The World Bank’s investments in the Great Green Wall: A desert mirage?