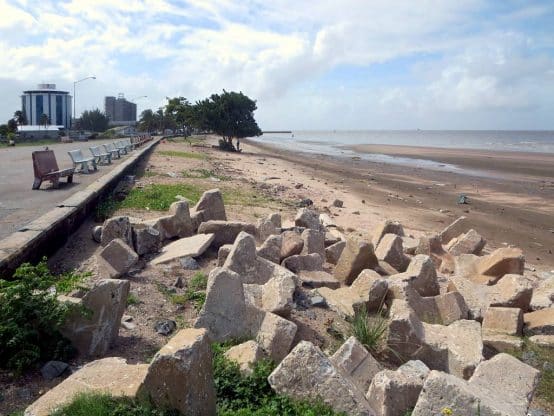 A seawall in Georgetown, Guyana. The low-lying country is highly vulnerable to flooding from sea-level rise caused by climate change. Credit: David Stanley.

Guyanese civil society has reacted with incredulity to the World Bank’s first Systematic Country Diagnostic (SCD) for Guyana, which has suggested that – despite the urgent need to transition to a low-carbon global economy – the country will experience a substantial windfall from its new offshore oil development. According to the document, the development could see Guyana’s per capita GDP rise to $16,900 by 2030, more than 2.5 times its current size.

This comes after research published in September showed that the World Bank and IMF have routinely over-estimated future revenues from new oil and gas discoveries over the past two decades, resulting in a ‘presource curse’ in many countries characterised by a severe mismatch between policies and actual revenues.

The Bank’s projection – which will frame its engagement with Guyana over the next five years – flies in the face of global climate goals, which the Bank is ostensibly supporting all countries to achieve through its newly released Climate Change Action Plan for 2021-25 (see Observer Summer 2021). The Bank previously backed Guyana’s offshore oil development through a combination of development policy finance (see Background, What is World Bank Development Policy Finance) and technical assistance – with both national and international civil society being highly critical of this support (see Observer Autumn 2020).

The Bank’s Executive Directors must stop this lunacy before the country team destroy Guyana and the entire planetMelinda Janki, Guyanese lawyer

The Bank’s support ignores increased calls to abandon new oil and gas extraction projects. In its Net Zero Report released in May, even the historically conservative International Energy Agency noted that limiting average global temperature increase to 1.5°C compared to the pre-industrial period would necessitate “no new oil and gas being approved for development.”

The Bank’s projection is also at odds with analysis of Guyana’s oil prospects produced by the US-based Institute for Energy Economics and Financial Analysis (IEEFA) published in October 2020. In contrast to the Bank, IEEFA found, “that oil revenues won’t cover Guyana’s annual budget deficit over the next three years and meet its pledge to build a Sovereign Wealth Fund. This will lead to a shortfall of $482 million in the first three years.” Even with a predicted improvement in the following two years, IEEFA notes, “the aggregate five-year annual cash deficit still is likely to be $160 million,” with the following period looking highly uncertain: “the outlook for the oil and gas industry is largely negative. New, long-term global market and political forces have created a permanent oversupply of oil and gas, low prices and new competitors that will keep markets unstable.”

Ignoring climate risks in favour of business as usual

The World Bank’s strong support for oil-based growth in Guyana is also counterproductive in light of the country’s severe vulnerability to the physical risks posed by climate change, even as the development pathway it endorses means these impacts will be more severe. Ironically, the SCD fully acknowledges these risks, noting, “fiscal risks emanating from climate and natural disasters could derail…growth and development efforts; necessitating targeted public investment to build resilience. Coastal flooding is an especially serious risk, as much of Guyana’s population and economic activity—especially agriculture—is concentrated in low-lying areas along the Atlantic coast.”

Indeed, in response to the threats posed by climate change, Guyanese citizens sued their government in a ground-breaking case filed in May, claiming its pursuit of offshore oil development is unconstitutional, “on the grounds that it exacerbates global warming and threatens human rights.” The case, the first of its kind in the Caribbean, was filed in Guyana’s Constitutional Court and is ongoing.