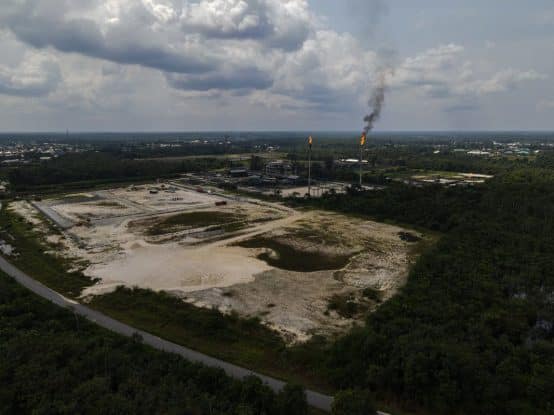 New analysis by ActionAid USA and the Bretton Woods Project finds that IMF policy advice has undermined a just energy transition since the Paris Agreement was signed.

The International Monetary Fund (IMF) has undermined global climate action by supporting fossil fuel expansion through its policy advice, locking developing countries into a reliance on dirty coal and gas that is harming their economies and the planet, new research by ActionAid USA and the Bretton Woods Project finds.

The report, IMF Surveillance and Climate Change Transition Risks, is based on analysis of all 595 Article IV reports conducted in the IMF’s 190 member countries between the signing of the Paris Agreement in December 2015 and March this year. Article IV reports contain policy advice to countries that shapes their economies for years to come.

The report’s Executive Summary is included below.

This report is being released amidst overlapping global crises: the COVID-19 pandemic, the worsening climate crisis, and the widening inequality gap within and between countries. The IMF’s Managing Director, Kristalina Georgieva, has been among the most vocal proponents of ‘building back better’, arguing for a coordinated green recovery from the COVID-19 pandemic. Concurrently, after years of debate within the institution about whether climate change is core to the IMF’s mandate, the Fund has belatedly begun to integrate climate issues into its surveillance mandate, with the recently published Comprehensive Surveillance Review (CSR) making a strong case that both physical and transition risks from climate change potentially present macro-structural challenges.

This shift will require significant changes in the policy advice the IMF provides to member countries if the Fund is to support a just energy transition and get behind urgently required climate action efforts. This report focuses on the IMF’s approach to transition risks from climate change – that is, the reduction in the value of fossil fuels and related infrastructure or assets, because of the low-carbon transition – which can pose risks for the wider economy. Recent research has already established that the IMF’s consideration of transition risks in its surveillance work has been minimal; this report presents new findings on key areas of Fund surveillance related to transition risks, and suggests that the Fund’s approach to fossil fuels, which largely sees the imperative to reduce greenhouse gas emissions as a ‘demand side’ issue, is insufficient to address transition risks, and – more broadly – to support a just energy transition.

Beyond developing a better understanding of the transition risks posed to its member countries, this report argues that current IMF policy advice is undermining many countries’ ability to undertake a just energy transition, and that the Fund needs to better understand how this advice itself is shaping member countries’ vulnerabilities to these risks. Taken together, the report calls for the IMF to go beyond mitigating transition risks to developing new policy advice for members that is aligned with a just energy transition to a low-carbon economy.

The empirical research undertaken as part of this report explores how the IMF’s existing policy advice in its Article IV surveillance is undermining a just energy transition across many IMF member countries. It presents new findings from a review of all Article IV reports that the IMF conducted between the signing of the Paris Agreement in December 2015 and March 2021. The review found that in 105 member countries, despite the urgent need to reduce greenhouse gas emissions to meet global climate goals, the IMF’s policy advice endorsed, or directly supported, the expansion of fossil fuel infrastructure. Additionally, the Fund’s commonplace policy advice on power sector reform and removing demand-side energy subsidies may present further obstacles to a just energy transition in many IMF member countries.

In 69 countries, the Fund has either directly or indirectly advocated for the privatisation of state-owned energy or electricity utilities, which is compounded by the more ubiquitous advice to slash public spending in many member countries. Among other considerations, privatisation can lead to a more fragmented energy sector and make it difficult for states to retire fossil fuel-based sources of energy without incurring large compensation claims from foreign investors. The IMF is also increasingly positioning energy pricing reforms as a necessary first step in decarbonising national economies. Our research indicates that while the Fund advocated for fossil fuel subsidy removal or reform in 71 countries, these policies largely targeted consumer subsidies rather than affecting the economics of fossil fuel production. This focus on demand side measures is insufficient to achieve a just energy transition. In cases where there are few alternatives to fossil-based power or transport, including in most emerging or developing economies, such policies are likely to have little impact on reducing greenhouse gas emissions at scale unless accompanied by investment in clean energy alternatives. This effectively results in a form of ‘green’ structural adjustment.

The review also provides case studies of IMF advice in Mozambique and Indonesia, with a focus on IMF policy advice related to coal mining and the power sector. It shows that in these cases IMF advice has entrenched fossil fuel dependency and opened the door to increased investment in coal. This has left both countries highly exposed to the transition risks associated with coal. The trajectory of this advice raises the question of how the Fund will meaningfully integrate transition risks into its surveillance guidance for these and other member states going forward.

Overall, these findings illustrate the extent to which the Fund will have to substantially modify its policy advice in order to support a just energy transition, and illuminates some of the contradictions of its policy prescriptions in recent decades. This is particularly the case in emerging and developing economies, where countries will need increased fiscal space to undertake national climate plans and achieve the Sustainable Development Goals and thus avoid the worst impacts of climate change. This presents a direct challenge to the IMF’s policy orthodoxy, which tends to be centred on ensuring reduced public spending and increasing export revenues, often through carbon-intensive sources.

This report calls for the IMF’s policy advice on climate change transition risks to be aligned with ActionAid’s principles for a just energy transition, which requires that policy frameworks work to address, rather than exacerbate, inequalities; transform energy systems to work for people, nature, and the planet; and ensure inclusivity and participation.

The IMF plays a critical role in shaping policies that governments adopt to achieve macroeconomic stability. The newly adopted IMF Comprehensive Surveillance Review (CSR) takes steps to increase attention on climate, but the Fund is only at the beginning of developing its approach to addressing transition risks. As the IMF begins the process of developing detailed guidance for staff that will help them to implement the CSR from early 2022, we recommend the following – based on the analysis in this report as well as proposals across a range of related academic and civil society reports – to help ensure a feminist, green and just energy transition.