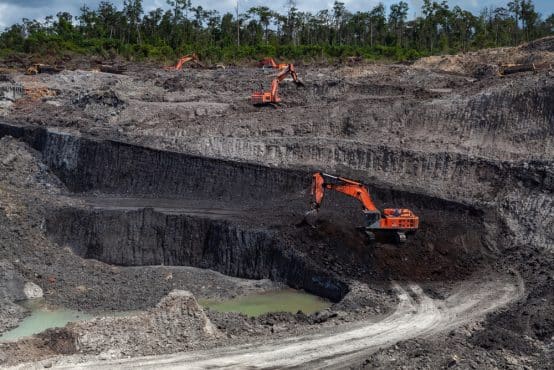 Excavators work at a coal mine in North Kalimantan, Indonesia. New research shows support for fossil fuel expansion has been widespread in IMF bilateral surveillance since the Paris Agreement was signed. Credit: Shutterstock.

The IMF quietly proposed a major increase in staff capacity to work on climate at the end of July as part of an institution-wide climate strategy, even as questions about its approach remain.

However, the IMF executive board’s assessment of the paper appeared to stop short of giving a full endorsement of the proposed increase in capacity, noting that it, “looked forward to assessing this, together with other funding requests, during the discussion of the Fund’s overall budget,” which is due to happen by the end of 2021.

The Fund’s policy orthodoxy across much of the Global South, which often prioritises fiscal consolidation and increases in carbon-intensive exports, is misaligned with states’ national climate plans.

This includes a report published by ActionAid USA and the Bretton Woods Project in late August. The research, based on a review of the IMF’s bilateral surveillance in its member states since the Paris Agreement was signed in December 2015, found that the IMF has been undermining a just energy transition in many countries, including through support for fossil fuel infrastructure expansion in over half its members (105 countries). The report argues that the Fund’s policy orthodoxy across much of the Global South, which often prioritises fiscal consolidation and increases in carbon-intensive exports, is misaligned with states’ national climate plans.

Surveillance: A key priority of the IMF’s climate strategy

Among the key components of the IMF’s proposed climate strategy is a significant increase in climate coverage in its surveillance work (see Inside the Institutions, IMF surveillance). The Fund is seeking to cover different aspects of climate’s ‘macrocriticality’ – or how climate is immediately relevant to countries’ macro-financial stability – in 60 countries per year under the proposal (an increase from 8-12 per annum currently).

The strategy proposes looking at adaptation and resilience issues in Article IV reports – the IMF’s annual economic “health checks” of its members – in 20 countries each year which are particularly vulnerable to the physical impacts of climate change (i.e. where storms, floods or other impacts risk causing significant economic damage). Similarly, the IMF is seeking to proactively engage the world’s 20 largest greenhouse gas emitters on climate change mitigation issues in its Article IV reports, with a proposed 6-7 reports yearly focused on this issue.

Significantly, the strategy also includes a strong emphasis on ‘transition management’ to a low-carbon economy – an acknowledgement by the Fund that weaning its members off fossil fuels will involve traversing considerable macroeconomic challenges, particularly for countries heavily reliant on revenues from carbon-intensive sources. The strategy notes, “Transition management is a macro-critical policy challenge for almost every IMF member”, with the macroeconomic implications of meeting national climate plans one area highlighted by the Fund. As such, the Fund proposes to look at the issue in Article IV reports in all countries, once every 5-6 years, meaning 33-34 reports focusing on this topic annually.

Despite being cautiously optimistic about the Fund’s attempts to integrate climate change into its mandate, civil society and academics have highlighted that this is a significant departure from the Fund’s current policy advice.

Research by Boston University’s Global Policy Development Center released in March 2021 found that only three Article IV reports even mentioned transition risks related to climate change in 2020. The two Article IV reports that did note the risk of fossil assets being ‘stranded’ by the low-carbon transition also gave contradictory advice about the need to boost investment in carbon intensive sectors.

The ActionAid USA and Bretton Woods Project report documented that, in addition to support for fossil fuel infrastructure expansion, other common features of the Fund’s policy advice in its surveillance are also contrary to achieving a just energy transition in emerging and developing economies, in particular.

The Fund’s commonplace advice that countries pursue fiscal consolidation has implications for the energy transition: The report found that the Fund has supported the privatisation of state-owned enterprises in the energy sector in 69 countries. This can pose challenges for coordinating the rapid phaseout of fossil fuel-based energy required to meet global climate goals, including resulting in privatised fossil fuel assets being owned by foreign investors. Such investors have increasingly sued states in investor-state dispute settlement tribunals (such as the World Bank-hosted International Centre for Settlement of Investment Disputes), if they attempt to retire these assets early (see Observer Summer 2021).

The report also found that the IMF’s efforts to reduce fossil fuel subsidies (present in 71 countries) primarily focused on ‘demand-side’ subsidies, rather than fossil fuel production subsidies. Without clean energy alternatives, which are often lacking in emerging and developing economies, this policy is unlikely to reduce emissions at scale, resulting in higher energy prices for those in the Global South, in what has been referred to as ‘green structural adjustment’ (see Observer Autumn 2021).

The report calls for the Fund to develop clear guidance for staff on managing transition risks that ensures that – at a minimum – the Fund’s policy prescriptions ‘do no harm’. It calls for Fund advice on energy subsidies to be “firmly embedded in countries’ national just transition dialogues,” and for the Fund to create an institutional view on sustainable industrial policy, “that empowers IMF operations to support effective and coordinated strategies for sectoral and economic transformation,” as part of a re-think of its advice on privatisation.