Making $650B in SDRs work for lower-income countries

The challenge of reallocating SDRs: a primer 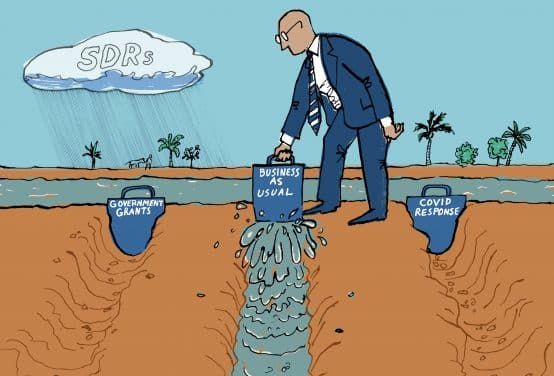 On 2 August, the IMF board of governors approved a general allocation of $650 billion worth Special Drawing Rights (SDRs), to serve as “a shot in the arm for the global economy at a time of unprecedented crisis.” SDRs are a type of international reserve asset which can be freely traded for hard currency to pay for imports or any other type of government expense. Following the board of governors’ decision, on 23 August IMF member countries (with some exceptions, such as Afghanistan) received their allocated SDRs and are now free to use them as they see fit to respond to the crisis.

While falling significantly short of the $3 trillion called for by civil society organisations (CSOs) such as Belgium-based Eurodad, the scale of the allocation is nevertheless significant. SDR allocations occur very rarely – the IMF has done so only four times in its history – and the current allocation accounts for 69 per cent of all the SDRs ever disbursed. The disbursal, which had previously been blocked by the US Trump Administration (see Dispatch Springs 2020), is one of the landmark moments in the history of the IMF and has the potential to serve as enormous support to low- and middle-income countries (L/MICs) in their pandemic responses.

The current course set on SDR channelling is one of relatively limited benefit for LICs and MICs and, indeed, could even see their debt outlooks worsen or the likelihood of austerity being imposed increase

Because of IMF rules, SDRs are allocated to countries based on the relative size of their economies, not their relative need to respond to the crisis, an arrangement that has been criticised by the G24. This means that high-income countries have received nearly $400 billion worth of the SDRs, with MICs receiving $230 billion and LICs just $21 billion. For an allocation whose motivation, in the words of the IMF, is especially to “help our most vulnerable countries struggling to cope with the impact of the COVID-19 crisis,” having a large chunk of the SDRs sitting idle on the balance sheets of high-income economies is unhelpful.

SDR channelling proposals from the IMF: Business as usual

High-income economies and the IMF recognise that for the SDR allocation to have the largest possible positive effect, rich countries need to channel some of their SDRs to LICs and MICs. In June, the G7 stated, “we encourage the IMF to work quickly with all relevant stakeholders to explore a menu of options for channelling SDRs to further support health needs, including vaccinations, and to help enable greener, more robust recoveries in the most affected countries.” The G7 countries noted that they hoped for a global channelling of $100 billion worth of SDRs.

Over the past months, the IMF has been working on channelling proposals, and it is now relatively clear what approaches the IMF is recommending that rich countries undertake: (1) using SDRs to boost the resources of the IMF’s Poverty Reduction and Growth Trust (PRGT) (see Observer Autumn 2021), (2) using SDRs to provide initial funding to a soon to-be-created IMF fund, the Resilience and Sustainability Trust (RST), and (3) on-lending SDRs to multilateral development banks (MDBs), including the World Bank.

On the PRGT – the IMF’s concessional lending facility for LICs – the IMF has called for $17.9 billion worth of SDRs to boost its lending capacity. For the RST, the G7 has given the IMF the green light to work on the plan, with the intention of providing loans for countries to combat climate change or improve their healthcare systems. The early suggestions are that it would be operational from the end of 2022 at the earliest and would require economic conditionality for countries to access finance. In terms of on-lending to MDBs, high-income economies are increasingly interested in this option, but an issue remains around how countries can on-lend to MDBs whilst still maintaining the option to recall their SDRs in the event of balance of payment emergencies.

Assuming that the plans being mooted at present are close to what will transpire, we will see high-income economies channelling around 15-20 per cent of their allocations to boost the conventional lending capacity of the IMF, the World Bank, and other MDBs. As outlined below, for many, this is an unsatisfactory state of affairs.

Calls for ambition at definitive moment in economic recovery

There has been vocal and varied criticism of the approach that the IMF and high-income economies are proposing for SDR channelling. Former US Treasury official Mark Sobel and Martin Wolf, of the Financial Times, have both argued that the IMF should not be burdening countries with more debt at this time of crisis, as would almost certainly be the case under the PRGT/RST/MDB proposals. Sobel wrote of the RST that “LICs need grants, not more debt”, while Wolf argued that “bringing the pandemic under control is a global public good, which must be delivered by grants from rich countries. It is a crime and a blunder that this has not been understood and done already.”

In similarly strong terms, CSOs such as Oxfam have argued that channelled SDRs must provide debt-free financing and not include economic conditionality that could force countries to impose austerity. A group of UK-based CSOs, including CAFOD and the Jubilee Debt Campaign, raised similar demands to the UK government, adding that the UK should consider offering alternative foreign reserves to the SDRs, freed up by the influx of SDRs to the Treasury, to provide grants or support initiatives such as Covax. The details on how this could be done in the UK context have been outlined by CAFOD, and similar arrangements need to be explored for other high-income economies. The size of rich countries’ SDR channelling is also a matter of concern. Channelling 15-20 per cent of their SDR allocations is far less than these countries can afford or what is required.

A final problem that has emerged is that several high-income economies intend to count their on-lending of SDRs to the IMF and MDBs towards their aid commitments, leading to likely cuts to aid spending elsewhere. As CSOs, including Oxfam and Christian Aid, have noted, this would be a moral failure on the part of these governments, as the SDR allocation is a new addition to their balance sheets, and in no way incurs a cost to their taxpayers or negatively impacts their debt profiles.

Ultimately, given the precarious moment that the global economy presently faces, there is a need for high-income economies and the IMF to be ambitious. The current course set on SDR channelling is one of relatively limited benefit for LICs and MICs and, indeed, could even see their debt outlooks worsen or the likelihood of austerity being imposed increase, as well as potentially reducing the amount of aid financing. The alternative – that large-scale debt-free financing is provided to countries in need to allow them to respond to the pandemic – is achievable, if the political will is there.

Making $650B in SDRs work for lower-income countries

The challenge of reallocating SDRs: a primer