Are Japan and the World Bank supporting a coal plant with human rights violations In Indonesia? 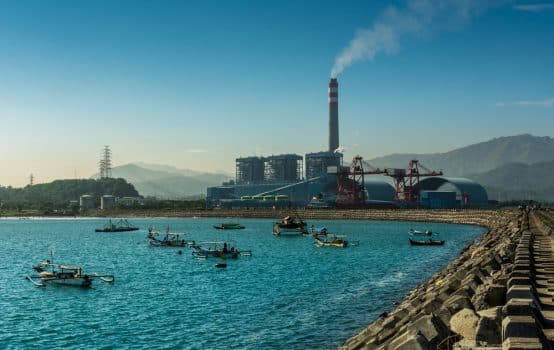 Indonesian civil society organisations (CSOs) have raised concerns that the World Bank is promoting gas as a transition fuel in its new Country Partnership Framework (CPF) for Indonesia for 2021-2024. Analysis of the CPF presented in this briefing further shows that the Bank is due to provide significant support for Indonesia’s state electricity company, despite its planned coal expansion. The Bank’s intended support for decarbonisation risks coming after long-term commitments to new fossil fuel infrastructure have already been locked in.

The Indonesia World Bank Country Partnership Framework (CPF) which sets the parameters of the Bank’s engagement in the country between 2021 and 2024, was published in May. Twelve organisations in Indonesia, including Trend Asia, WALHI, Greenpeace and Pena Masyarakat, reviewed the CPF to identify its exposure to fossil fuels. In a statement sent to the World Bank in Indonesia, they noted that the Bank is incentivising the use of gas and biogas as transition fuels in Indonesia and that technical assistance and Development Policy Loans are scheduled to support the Indonesian State Electricity Company, PT Perusahaan Listrik Negara (PLN), which still intends to construct 33,000 MW of coal-fired and gas-fired power stations.

The CPF is therefore at odds with the World Bank’s new Climate Change Action Plan (see Observer Summer 2021), which aims to align with the Paris Agreement through the “provision of support to clients in a way that is consistent with low-carbon and climate-resilient development pathways.” The CPF also proposes a phased response, with Covid-19 recovery in the first half of the 2021-2024 period, and decarbonisation efforts coming in the second period, thereby delaying urgent action on tackling climate change.

If the DPFs are targeted at supporting the PLN’s financial sustainability, then the Bank must be aware that its financing will also incentivise coal and gas development

The Indonesia CPF appears to put tackling climate change on the back-burner, a fire to be put out once the Covid-19 crisis has been brought under control. This is a high-risk strategy, given the urgency of keeping global warming  below 1.5°C and the intensity of climate impacts and global heating already underway.

The CPF states that “in the first half of the CPF period, the accent will be on supporting inclusive and sustainable economic recovery, in ensuring effective implementation of government’s emergency assistance to mitigate the impacts of the pandemic as well as an orderly exit from exceptional support measures.” This suggests that low-carbon development will be a lower priority in this first half of the CPF, leaving a period of ‘open season’ for investors and regulators to drive for growth at any cost, instead of seizing the opportunity created by the dual crisis of climate change and the Covid-19 pandemic to transition rapidly to a low-carbon economy.

The framework further states that if engagement with the government on issues such as the transition to low carbon energy and climate change shows results, the Performance and Learning Review (PLR) would provide an opportunity for assistance to be rebalanced in the second half of the CPF. This mid-term review will be an important, if belated, opportunity for CSOs to push for the urgent prioritisation of decarbonisation. The review process must be open and inclusive of a broad range of Indonesian civil society actors.

The latter phase of the CPF is identified as including “climate informed DPFs (Development Policy Finance) [that] will support sustainable and resilient recovery through climate actions, for example, shifting to cleaner transport and low-carbon energy.” If the DPFs are targeted at supporting the PLN’s financial sustainability, then the Bank must be aware that its financing will also incentivise coal and gas development.

In the July 2013 World Bank Energy Directions Paper, the Bank stated it would fund coal power generation “only in rare circumstances”. However, in Indonesia, the World Bank’s Development Policy Finance (DPF) – non-earmarked budget support which provides finance directly to a country’s general budget as opposed to project finance for a specific project – has since offered many incentives for fossil fuel development, including subsidies given to Public Private Partnership (PPP) projects – which in Indonesia’s energy sector predominantly comprise coal power plants – and government contract incentives for natural gas exploration. All of these DPF supported investment incentives contradict Indonesia’s G20 commitment and the Bank’s pledge to phase out fossil fuel subsidies.

The CPF for Indonesia is built around four engagement areas: “to strengthen economic competitiveness and resilience; improve infrastructure; nurture human capital; strengthen management of natural assets, natural resources-based livelihoods and disaster resilience.” But there is an emphasis in the CPF on enabling foreign direct investment, which is of significant concern, because the World Bank’s 2018 pledge to end financing for upstream oil and gas does not include indirect financing through financial intermediaries (FIs). This keeps the door open to Bank support for private financing of fossil fuels, including coal and upstream oil and gas, as a result of the World Bank’s substantial equity guarantees and lending.

Just before the publication of Indonesia’s new CPF in May, the CEO of the PLN announced a moratorium on new coal plants from 2023, stating that 1,500 TWh of new electricity required between now and 2060 (five times the current electricity demand in the country) must come from renewables.

A November 2020 presidential regulation features coal gasification on a “priority” investment list, which includes incentives such as tax allowances or tax breaks. A $2 billion project in Sumatra for the construction of a coal gasification plant to produce methanol and subsequently dimethyl ether (DME), is considered a nationally strategic project. Downstream coal processing includes methods of transforming coal into different products, in this case into DME as an alternative to LPG, commonly used for cooking.

In this context the position of the Multilateral Investment Guarantee Agency (MIGA), the World Bank’s private risk insurance arm, as a debt guarantor for the PLN is inconsistent with the WBG’s commitment to exit coal. Indonesian civil society groups fear that MIGA’s guarantee for PLN’s debt of Rp 500 trillion/$35 billion will contribute to PLN’s capacity to build more coal-fired power plants. These plants are unnecessary, given that Indonesia is already experiencing electricity oversupply of almost 50 per cent.

Also, as planned in the CPF, the World Bank has committed $200 million to a policy-based guarantee to ensure continuity of electricity supply by addressing the projected impact of the Covid-19 crisis on PLN’s cash flow and by improving the company’s medium- to long-term financial viability. Given the PLN’s heavy debt attributed to coal-fired power plants, and the promotion of new coal-fired power plants and downstream coal projects, it is unlikely that this CPF-envisaged major Policy Based Guarantee to support PLN Financial Stabilisation and Reform Project is consistent with the World Bank’s commitment to get out of coal.

The International Finance Corporation (IFC), the Bank’s private investment arm, is also implicated in supporting Java 9 and 10, the 2000 MW Java coal power station in Banten, Indonesia. This is one of the world’s biggest new coal complexes, backed by the IFC through its financial intermediary, Hana Bank Indonesia, which provided project loans in July 2020. This is despite Hana Bank endorsing IFC’s new Green Equity Approach, which was developed precisely to encourage equity clients in such countries to shift away from coal, with a goal to reduce their coal exposure by 50 per cent by 2025 and to zero by 2030 (see Observer Winter 2020).

Given that the life cycle of a coal-fired power station is around 40 years, ongoing construction of coal plants supported through MIGA, the IFC and policy-based guarantees risks leaving Indonesia paying for coal infrastructure until the late 2060s, locking the country into coal well beyond its deadline to become carbon neutral. This approach jars with the findings of the August 2021 IPCC report, which UN Secretary General Antonio Guterres said should “sound a death knell for coal and fossil fuels, before they destroy our planet.”

The CPF’s reform agenda will be supported by “an ambitious ASA with decarbonization considerations at its core” – an Advisory Services and Analytics (ASA) report being a policy-based non-lending service produced by the Bank that is influential in shaping national policy. If the ASA is to deliver on the decarbonisation agenda, it must address the World Bank’s existing commitments to coal and other fossil fuels, and ensure it supports policy and regulatory reforms on a pathway towards carbon neutrality in line with Indonesia’s international commitments.

The International Energy Agency’s Net-Zero by 2050 report notes there is no need for investment in new fossil fuel supply. More questionable still in the case of Indonesia are new gas power plants, which – often built with a 30-year lifespan – would take the world past the 2050 target for achieving net zero.

The petrochemical industry has long claimed gas is a “bridge fuel” that is less damaging to the climate than oil or coal. But recent research by the International Institute for Sustainable Development (IISD) presents growing evidence of the damage caused by methane leaks, the urgency of curbing emissions and the falling price of renewables that will squeeze the whole gas supply chain, creating financial risks. Furthermore, now that renewables are competitive economically, additional gas tends to displace investment in renewable energy as well as coal. Gas is starting to impede rather than to enable the energy transition.

Nevertheless, the Indonesia CPF has a specific emphasis on natural gas. In a number of places, the CPF refers to the acceleration of the deployment of natural gas and biogas. The CPF Results Framework also outlines plans to conduct an ASA to support gas and alternative energy sources and has a stated aim of “improving the investment climate for private investors by strengthening natural resource governance, gas infrastructure planning, and regulatory reform.”

The WBG has made a regressive U-turn on gas in the CPF since the publication of the Indonesia Systemic Country Diagnostic (SCD) 2020. Civil society groups question how and why the WBG advocates for gas in the CPF, when the opportunity is ripe to finance and support the rapid uptake of sustainable renewable energy, in line with Indonesia’s decarbonisation goals.

The CPF states that provided the government proceeds with energy sector reforms, WBG support will also be extended through a policy-oriented Program-for-Results (P4R) and lending operations directed at “energy sources alternative to coal”, aimed at improving sector financial sustainability while reducing the fiscal burden of the energy sector and improving access to energy. It seems clear now that energy sources considered “alternative to coal” include gas, as well as the downstream use of coal (including coal liquefaction and  gasification) which serve as a means to continue exploiting Indonesia’s massive coal reserves.

Are Japan and the World Bank supporting a coal plant with human rights violations In Indonesia?