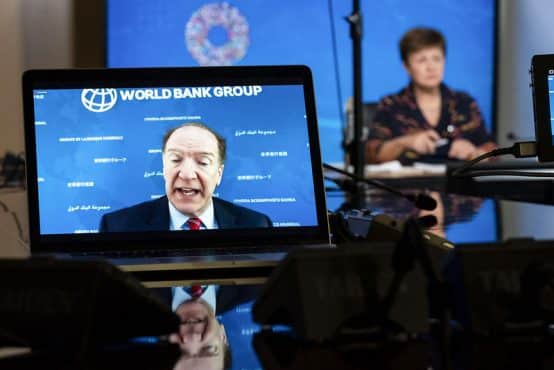 This year’s World Bank and IMF Annual Meetings will take place with questions over the two institutions’ integrity and legitimacy far more front and centre than most would have predicted just a few weeks ago. Following an independent investigation commissioned by the World Bank, the Bank announced in September that it would be discontinuing its infamous Doing Business Report (DBR) owing to “data irregularities” (see Observer Autumn 2021, Winter 2019). The issue, as Belgium-based network Eurodad noted, “raises serious concerns about the governance of the Bank, of which the DBR is just the tip of the iceberg.”

The fallout has not been restricted to the Bank, with IMF Managing Director Kristalina Georgieva personally implicated in the DBR irregularities for her purported role in interfering with China’s 2018 Ease of Doing Business ranking. Georgieva has become the central figure in the scandal, with the Economist magazine calling on her to resign and former Bank chief economist Joseph Stiglitz in turn calling the attempts to remove Georgieva “a coup”, raising questions about tensions between the Bank and the Fund.

The episode has brought to light once again the link between IMF and World Bank governance and geopolitics. Within the context of the USA-China rivalry, strong voices in high-income countries remain fearful of China’s efforts to alter the pre-eminence of the Global North in the design and functioning of the international financial architecture (see Observer Winter 2020) and to increase its influence in international organisations. Pressure from the Global South for governance reforms at the Bank and Fund has a long history and is borne out of frustration at the degree to which the institutions’ governance structures, such as the gentleman’s agreement, fail to benefit all shareholders equally (see What is the ‘gentleman’s agreement’).

These geopolitics, rather than research-based evidence, appear to be informing the IMF’s engagement with its members. Boston University’s November 2020 research concluded that “countries…granted relatively more relaxed fiscal conditionality were…countries with larger voting rights in the IMF, with more overseas development assistance from non-traditional sources, and with strong export and United Nations voting alignments with Western Europe. Higher levels of austerity are associated with inflation and higher levels of foreign direct investment from Western Europe.” Previously, the IMF’s intervention in Greece, which shareholders from the Global South complained was instigated largely to protect European banks, marked another case in point (see Observer Summer 2015). Additionally, analysts have stressed that the DBR scandal comes at a time when the Fund is struggling “to reconcile an internal policy conflict between austerity and expansionary public spending”, with the Financial Times concluding that the IMF is experiencing an “identity crisis”.

It is against this backdrop that the IMF and World Bank will host the Annual Meetings and try to set out their stalls to respond to the Covid-19, debt, and climate crises their member states face. As discussed below, their ineffectuality in responding to all of these is inextricably linked to their governance structures, and the dominance of the interests of high-income economies, in shaping their policy responses.

Doing Business goes out of business

The World Bank’s decision to discontinue its DBR marks a significant victory for civil society, popular movements and academics who have long criticised the report on many fronts (see Observer Autumn 2021, Spring 2021, Autumn 2020). Nevertheless, given that the Bank noted in its announcement on DBR that it “remains firmly committed to advancing the role of the private sector in development and providing support to governments to design the regulatory environment that supports this,” close attention will be paid during the Annual Meetings to what the Bank plans to do next in terms of assessing national private sector development. It will be key to see what steps will be taken to ensure its research and policy advice functions are structured in a way that minimises conflicts of interest and political interference. The Bank’s reaction to the criticism regarding the lack of development impact associated with the International Development Association’s Private Sector Window will be illuminating in that regard (see Observer Autumn 2021).

The 30 September ‘Positioning Speech’ by World Bank President David Malpass ahead of the Annual Meetings seems to provide evidence that civil society concerns about the DBR’s flawed underlying assumptions of inherently inefficient public services and the corresponding need to focus on private-sector development at all costs remain alive and well. In his speech the president noted that, “It’s critical that countries eliminate wasteful public expenditures, make service delivery more efficient, and reallocate public resources to their most productive uses.” Clearly unaware of long-standing criticisms of the Bank’s push for public-private-partnerships (see Observer Summer 2019, Summer 2018), he added that in this “time of upheaval”, the world requires “thousands of large public-private projects.”

In August, the IMF board of governors approved a general allocation of $650 billion worth Special Drawing Rights (SDRs), to serve as “a shot in the arm for the global economy at a time of unprecedented crisis.” Later that month, IMF member countries received their allocated SDRs and are now free to use them as they see fit to respond to the crisis, more or less (see Observer Autumn 2021). The most important issue at hand now is how high-income countries will channel their SDRs to countries in need of additional financing and liquidity to respond to the crisis (see Observer Autumn 2021).

An open letter to G20 Finance Ministers, Central Bank Governors and the IMF signed by 280 CSOs, including, Afrodad and Third World Network, called for SDR channelling that provides debt-free financing, does not impose economic conditionality, is accessible to middle-income countries, and expands grant funding to confront the pandemic and support a green, just global recovery. Civil society has also called on the IMF’s wealthy members to channel as large a share of their allocations as possible and to do so quickly.

Unfortunately, the evidence suggests that plans for channelling likely to be announced by high-income countries during the Annual Meetings will fall short of what is required. It is expected that various countries will state intentions to channel around 20 per cent of their SDR allocations – far short of the level of ambition needed. In terms of where those SDRs will go, the IMF has made clear that it wants some of the SDRs to go towards boosting the Poverty Reduction and Growth Trust (PRGT), the Fund’s concessional lending facility (see Observer Autumn 2021). During the meetings the IMF may announce initial plans for a new fund, the Resilience and Sustainability Trust (RST), which it also hopes will receive a large proportion of channelled SDRs.

From the perspective of many in civil society, these options will fail to harness the potential of SDR channelling to support an ambitious crisis response (see Observer Autumn 2021).

Beyond SDRs, discussions are expected on how to advance the global response to the Covid-19 pandemic. This will include panel discussions such as “The health emergency is not over. How can we end the pandemic and accelerate recovery?” and “Ending the Pandemic: The Road to an Inclusive Recovery”. In May, the IMF published a “Proposal to End the COVID-19 Pandemic”, calling for $50 billion worth of investment to boost global vaccine rates. But the proposal is highly dependent on the willingness of rich nations to donate either money or vaccines, with the IMF lacking the teeth to push countries to act.

The possibility of a waiver of Trade and Intellectual Property Rights (TRIPs) for Covid-19 vaccines to boost global vaccine production has consistently been blocked by key high-income countries – with speculation that US support is largely a relatively cost-free political gesture, given opposition by the European Union and other key players. In turn, the World Bank and the Fund refuse to support a waiver, raising concerns that they are failing to address obstacles to equitable vaccine access (see Observer Spring 2021; fwinterSpecial Drawing Rights). The Bank’s unwillingness to challenge key shareholders was evident in the president’s ‘Positioning Speech’, in which he failed to support the waiver while stressing that, to “resume progress on development, a high immediate priority is to secure access to vaccines and accelerate their deployment.”

Again, the actions of the Bank appear governed by the influence and interests of its wealthiest members, to the detriment of the rest, and it will be interesting to see if the idea of a waiver is discussed again during the Annual Meetings.

As organisations such as Eurodad have observed, the pandemic is also causing a “debt pandemic” amongst developing countries. Initiatives like the G20’s Common Framework for Debt Treatments Beyond the Debt Service Suspension Initiative (DSSI) have failed to resolve the issue, but have merely kicked the can down the road (see Observer Winter 2020). The IMF’s Catastrophe Containment and Relief Trust (CCRT), which provides grants to some countries to pay debts to the IMF, is in need of additional funding, and it is possible that we will see announcements on this during the meetings.

It has been rumoured that the Development Committee – a joint inter-ministerial committee of the boards of governors of the IMF and the World Bank – is due to discuss a climate-related capital increase when it convenes at the Annual Meetings. Given the Bank’s ineffectual Climate Change Action Plan (see Observer Summer 2021), in which the only signature new policy commitment was the Bank producing climate and development diagnostics – while also re-affirming a previous pledge to align with the Paris Agreement –  civil society remains sceptical that the Bank is the right conduit for such a capital increase.

Not to be outdone, in July the IMF proposed adding up to 95 staff to boost the Fund’s capacity to work on climate issues, as part of its new Strategy to Help Members Address Climate Change Related Policy Challenges (see Observer Autumn 2021). Rumours are that the strategy was published with the aim of trying to persuade the IMF Board of the need for the IMF budget to be increased. Paired with the plans mentioned above for the funding expansion of the PRGT and the creation of a new RST, the Fund’s climate plans point to its ambition to significantly extend its reach.

Relatedly, the Annual Meetings will be a useful opportunity to take stock on the IMF’s plans on gender. In April, the IMF appointed its first ever Senior Gender Advisor (see Observer Summer 2021) and in July announced its intention to launch a new gender strategy. Gender has been an issue Georgieva has promoted, and civil society will watch closely to see how the subject is treated as the questions over Georgieva’s future rumble on.

As the Bretton Woods Project’s recent briefing on the gendered impacts of the Bank’s Development Policy Finance (DPF) and Civil Society Policy Forum discussions have stressed, significant concerns remain about the inability of the Bank to adequately assess the gender and environmental impacts of its policy financing instrument, which is one of its key pandemic response tools. Civil society will therefore continue to apply pressure for an overdue DPF retrospective and for the Bank to conduct an ex ante analysis of the gender impacts of its macroeconomic policies beyond those labelled gender-specific.