The IMF's Comprehensive Surveillance Review: A bungled attempt at meeting the moment 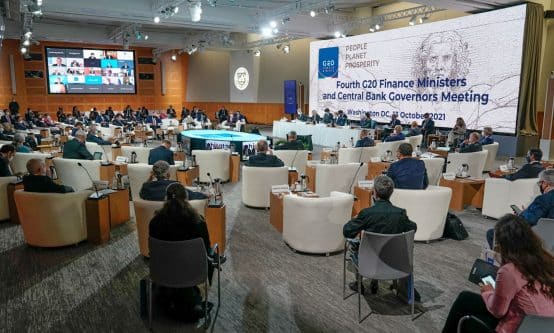 The  Group of Twenty  (G20) is an informal forum in which  the world's major economies discuss global financial and development issues. The G20 is made up of 19 countries and the European Union. The 19 countries are Argentina, Australia, Brazil, Canada, China, Germany, France, India, Indonesia, Italy, Japan, Mexico, Russia, Saudi Arabia, South Africa, South Korea, Turkey, the United Kingdom and the United States. Since December 1st 2020, Italy holds the Presidency of the G20, which is annually rotated amongst its members.

The communiqué of the G20 finance ministers and central bank governors was released on 13 October, offering an overly sanguine tone on the global health and debt crises, whilst failing to address major issues related to vaccine provision and private creditors. The most significant announcement within the statement relating to the international financial institutions was the endorsement by the G20 of the creation of a Resilience and Sustainability Trust within the IMF – a move that raises questions over the Fund’s role and remit.

It is telling to note that, excluding mention of reports by other institutions, the G20 communiqué does not include the word ‘crisis’. It is unsurprising, therefore, to find little by way of concrete actions to address the ongoing urgent health and debt situations facing the globe.

On the inequality in global vaccine levels, the G20 restrict themselves to stating that they “will strive to help address the bottlenecks and shortages of COVID-19 tools in low- and middle-income countries over the coming months, reaffirming our commitment to ensuring a safe, equitable and affordable access to vaccines, therapeutics and diagnostics.” Whilst acknowledging the “need to address the financing gaps” within the Covax Facility, there is no suggestion as to how the financing gap will be closed or announcement of any new commitments within the communiqué.

Whilst the communiqué states that members “recognise the role of COVID-19 immunisation as a global public good”, the South Africa and India-led proposal at the World Trade Organization calling for a temporary suspension of vaccine-related intellectual property rights is not mentioned (see Observer Springs 2020). While the US has now given its support to the initiative, the European Union and the UK continue to oppose. As such, as civil society groups such as the People’s Vaccine coalition make ambitious calls to increase vaccination goals and release intellectual property, the G20 remains largely silent. In response to the G20 statement, UK-based civil society organisation CAFOD argued that the G20 “lacks any urgency on getting resources to countries in global south to speed up vaccinations.”

Meanwhile, the G20’s tepid remarks on the concerning rise in global debt levels were met with scorn. The communiqué reflects positively on the “progress achieved” under the G20 Debt Service Suspension Initiative (DSSI) and within the Common Framework for Debt Treatment Beyond the DSSI. It further welcomes news of the extension of the IMF’s Catastrophe Containment and Relief Trust (CCRT) – which provides grants for the repayment of IMF loans – until 10 January 2022.

But on the elephant in the room – the lack of private creditor involvement in the above schemes – the G20 restricted itself to remarks such as “we also support early engagement of borrower countries and private creditors in the Common Framework” and “The G20 takes note of the IMF’s ongoing work on ways to improve the architecture for sovereign debt restructurings involving private sector creditors.”

In response, Jubilee Debt Campaign UK – who had earlier in October released research showing that the DSSI has led to only a quarter of debt payments being suspended – accused the G20 of being “asleep at the wheel” on the debt crisis.

Jubilee argued that “The G20 urgently need to compel private creditors to take part in debt restructuring” and further noted that “The current rise in global interest rates will worsen the crisis.” The G20 communiqué, unlike its predecessor in April 2021, did make reference to concerns around inflation and interest rates, stating that central banks are “monitoring current price dynamics closely” and “will act as need to meet their mandates”, a signal that inflationary preoccupations are emerging as a major global issue.

Support for Bank and Fund approach on climate made clear

Whilst G20 statements during the Trump administration tended to avoid climate, the subject garnered significant attention in this communiqué. There was a first mention from the G20 on the importance of conducting “a more systematic analysis of macroeconomic risks stemming from climate change and of the costs and benefits of different transitions”, matching the IMF’s rhetoric on such risks in its Comprehensive Surveillance Review, published in May. Now familiar calls on the roll of the private sector were made, with the G20 stating “we look forward to further collaboration between public and private investors to mobilise private capital”.

There was also a call to arms for the international financial institutions to “step up their efforts to pursue alignment with the Paris Agreement within ambitious timeframes and finance sustainable recovery and transition strategies, Nationally Determined Contributions and long-term low greenhouse gas emission development strategies in emerging markets and developing economies.” Such statements are likely a tacit approval of IMF plans for the expansion of its climate work (see Observer Autumn 2021).

The most significant announcement within the communiqué relating to the international financial institutions is the G20’s endorsement of the creation of a Resilience and Sustainability Trust (RST) within the IMF. The RST, proposed by the IMF earlier this year as a way for its member states to channel their new Special Drawing Rights (SDRs) allocations (see Observer Autumn 2021), was rumoured to have met a lukewarm response when presented to the IMF Executive Board in July. But the G20 endorsement means the initiative, which will require $30 billion to $50 billion in funding over the next ten years, will almost certainly go ahead.

The G20’s approval of the RST has been called a “landmark achievement” by Boston University’s Kevin Gallagher, but Oxfam have raised concern that the RST will require countries to receive conditionality that “would include painful austerity measures and deepen inequality”. These points have also been voiced by over 280 civil society organisations and academics in a joint statement calling for a more ambitious use of the new SDR allocation. In a Civil Society Policy Forum event prior to the Annual Meetings, Ceyla Pazarbasioglu, Head of the IMF’s Strategy, Policy, and Review Department, stated that calls for no conditionality will go nowhere (see Dispatch Annuals 2021).

Establishment voices have reacted hesitantly to the RST, with the German finance minister stressing the need for “clear delineation” between the roles of the IMF and the World Bank and the former head of the IMF strategy division citing justified concerns about “a fundamental reorientation” of the Fund’s remit. Much debate about the precise design of the RST lies ahead.

Finally, the G20 reiterated that they “look forward to an ambitious…replenishment” of the International Development Association (IDA), the World Bank’s low-income country arm (see Observer Spring 2021). On IMF governance, there were familiar remarks on the forthcoming IMF quota reform, stating “We remain committed to revisiting the adequacy of IMF quotas and will continue the process of IMF governance reform under the 16th General Review of Quotas, including a new quota formula as a guide, by 15 December 2023” (see Dispatch Springs 2021; Observer Winter 2019).

The IMF's Comprehensive Surveillance Review: A bungled attempt at meeting the moment