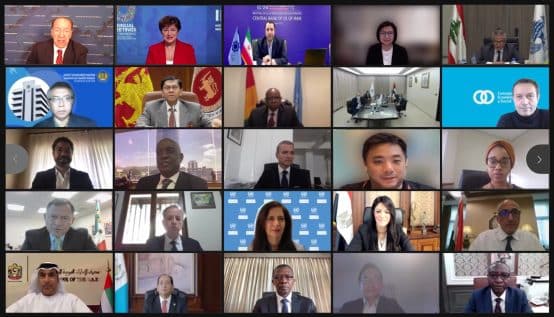 The G24 is a grouping of some of the most influential developing countries in the World Bank and IMF. It includes G20 countries such as India, Argentina, Brazil, Mexico, and South Africa. The G24 communiqué is traditionally the first statement of the IMF and World Bank Annual Meetings.

The communiqué of the Intergovernmental Group of Twenty-Four on International Monetary Affairs and Development (G24) – whose finance ministers met virtually at the start of the World Bank and IMF’s Annual Meetings on 11 October – noted with alarm the unequal economic recovery in the wake of the Covid-19 pandemic, with a clear discrepancy emerging between high-income economies and the rest of the world.

The G24 observed that, “Growth in per capita incomes of advanced countries and many emerging and developing economies (EMDEs) continue to diverge, largely driven by uneven vaccine access, fiscal space and financial capacity to respond to the crisis.” It added that EMDEs also faced multiple challenges which affect their medium-term recovery prospects, including “food insecurity, increasing inequality, persistent unemployment and informality, setbacks in education and human capital development, heightened debt vulnerabilities, conflict, fragility and migration, climate change and increasing inflation risks.” The G24 also highlighted that the possibility of “sudden tightening of financial markets poses additional downside risks,” reflecting concerns about the knock-on effect that inflation in high-income economies could have in EMDEs, as noted by the IMF’s most recent World Economic Outlook published in the lead-up to the Annual Meetings.

The G24 insisted that – as a first step towards EDMEs’ recovery – urgent efforts were needed by advanced economies to help end the pandemic. The communiqué argued that, “Advanced countries should ensure adequate upfront funding of Access to COVID-19 Tools Accelerator (ACT-A) and the COVAX Facility, fulfill their dose-sharing pledges and agree on a patent waiver for COVID-19 vaccines and treatments in order to support global recovery and on humanitarian grounds.” It added that, “All countries should ease trade restrictions and tackle logistical, financial and supply-chain bottlenecks that impede effective production and distribution of vaccines, treatments and critical medical supplies.” The G24’s calls for a patent waiver on vaccines followed persistent efforts by civil society to clarify whether the Bank and Fund would support a TRIPS waiver for Covid-19 vaccines in exchanges with officials from both institutions during the meetings, which were met with vague non-answers, despite both institutions flagging to need to scale up vaccination efforts (see Dispatch Annuals 2021; Observer Summer 2021).

The G24 also welcomed the IMF’s recent issuance of Special Drawing Rights (SDRs), as well as efforts by the IMF and high-income economies to voluntarily re-channel their SDRs to assist EDMEs’ recovery efforts, including the proposal for a new IMF-hosted Resilience and Sustainability Trust (RST; see Observer Autumn 2021). However, the G24 urged, “the IMF to explore further options [beyond IMF-hosted funds]…for members to voluntarily channel SDRs through the WBG, other MDBs [multilateral development banks], regional development banks and other prescribed holders of SDRs, without delaying the RST,” reflecting that IMF-based trusts have taken up most of the oxygen in the discussion on re-channelling thus far.

Relatedly, the G24 called for a timely conclusion of the IMF’s 16th quota review, which is due to be completed by the end of 2023, noting that the US’s obstruction of the last quota review process resulted in G24 members receiving lower SDR allocations in the recent issuance than would have otherwise been the case (see Observer Winter 2019), thus significantly impacting their capacity to respond to the pandemic. The G24 noted that, “we support a substantial quota increase and reduction in reliance on borrowed resources. We also call for an early consensus on a new quota formula and a meaningful shift in quota shares from advanced economies to EMDEs, while protecting the shares of the poorest countries.”

The communiqué also called for IMF reforms on surcharges and capital controls. It noted, “We urge the Fund to correct the regressive and procyclical character of the Surcharge Policy and suspend, or at least substantially reduce, existing surcharges to support pandemic responses.” The communiqué’s analysis of the counter-productive and regressive impact of surcharges was supported by research on the subject released in advance of the meetings (see Dispatch Annuals 2021). It added that G24 members, “look forward to further discussions on the review of the IMF’s Institutional View on Capital Flows,…to help countries reap the benefits of capital flows while managing risks to ensure stability,” following concerning findings from the Fund’s Independent Evaluation Office (see Observer Spring 2021).

Against the backdrop of continuing civil society concerns about the IMF’s austerity-based policy prescriptions (see Observer Autumn 2021), the G24 also urged the IMF to refine its approach to fiscal consolidation. The communiqué stated, “We call on the IMF to strengthen its attention to the social and distributional consequences of the growth and adjustment programs the Fund supports, as recommended in the recent IEO evaluation. This will help build country ownership of adjustment reforms.” Although IMF Managing Director Kristalina Georgieva responded to the IEO report during the Annual Meeting in a generally supportive manner, she only offered “qualified support” to the IEO view that, “Attention to growth implications of IMF-supported programs should become more thorough, systematic, realistic and sensitive to social and distributional consequences”

The G24’s communiqué concluded with a substantial discussion of climate change, noting that the Bank and Fund’s work in this area should respect the ‘common but differentiated responsibilities’ principle enshrined in the Paris Agreement. It noted that, “Low carbon pathways should offer opportunities to boost, and not impede, poverty reduction, job-creating growth, technological advances, trade openness and inclusive development in EMDEs.” The G24 called for WBG and IMF to work together on this agenda – no small task in the wake of the Doing Business scandal (see Dispatch Annuals 2021) adding, “We call on the WBG and IMF to tailor their support to countries’ unique and diverse economic structures and circumstances.”

The communique was released after the newly created Taskforce on Climate, Development and the IMF – of which the G24 is a member along with universities, thinktanks, and the Vulnerable Twenty Group (V20) – published a briefing in late September calling for the RST to include a climate risks ‘window’ to assist developing countries to deal with the longer term physical and transition risks posed by addressing climate change. A new IMF climate strategy published in July signalled that the Fund plans to significantly scale up its work on climate risks. Civil society has noted that this would necessitate a departure from much of the IMF’s current policy advice, which – in addition to fiscal consolidation – tends to encourage investment in carbon-intensive exports (see Observer Autumn 2021).