The hijacking of global financial governance? 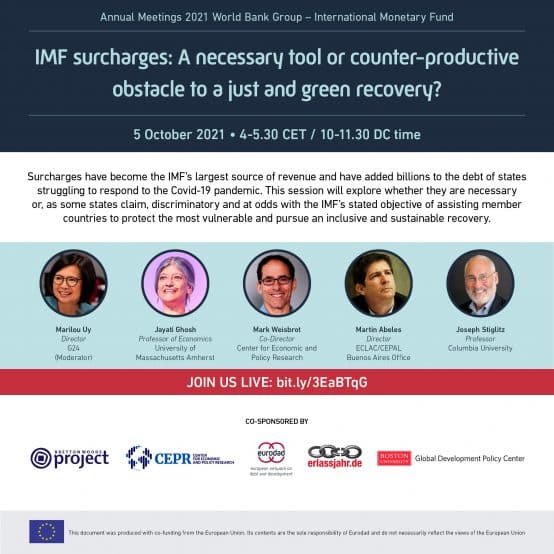 Notes from the Civil Society Policy Forum session on 6 October on the governance and resourcing implications of IMF's surcharges.

Since the Asian financial crisis, the IMF has sought to accumulate precautionary balances and disincentivise countries from an over-reliance on IMF financing by adding a surcharge to borrowing costs in certain circumstances. Surcharges have become the IMF’s largest source  of revenue and have added billions to the debt of states struggling to respond to Covid-19 pandemic. This session examined their governance and  resourcing implications and investigated whether they are necessary or, as some states claim, discriminatory and at odds with the IMF’s stated objective of assisting member countries to protect the most vulnerable and pursue an inclusive and sustainable recovery.

Surcharges are unfamiliar to most but have received recent attention due to pandemic.

Surcharges are charged on non-concessional account and are time and quota based. They are intended to mitigate credit risk. Proceeds generate income so Fund can accumulate precautionary income.

The G24 has criticised surcharges as pro-cyclical and regressive. Several new studies have been commissioned on the topic.

Two new policy briefs have been released by CEPR and GDPC stressing that the policy is counter-productive from a variety of perspectives.

Organisers reached out to IMF to provide a panellist, however Fund unable to do so.

It is possible to correct policy, which is regressive.

No published figures. 45% of all principal debt payments for five largest borrowers are due to surcharges. Argentina – $3.3 billion on surcharges. Several times the costs of vaccination of all its citizens.

Surcharges are procyclical and regressive – they deprives poor countries of hard currencies during the pandemic.

However countries already have plenty of reasons to avoid turning to the Fund for support, including procyclical nature of conditions attached to Fund programmes, erosion of sovereignty.

Credit risk refers to the Fund, however no significant credit risk to the Fund exists – as per 50 years of history. Arrears have always been paid.

Precautionary balance makes a small percentage of the Fund’s income – three orders of magnitude below its lending resources.

Incentivising early prepayment: Most countries that have paid early are high-income European countries, which are not representative of Fund programmes.

Other example: Brazil – however this was the result of domestic political issues and disastrous impact of IMF lending in the country. Last Fund programme interfered with implementation of worker’s party platform.

Argentina – repayment also due to electoral and political issues.

Surcharges are fundamentally a governance issue: Vast majority of member states have very little voice in the Fund. Were they to have more voice, the surcharges would not exist. US maintains control of the institution from its founding.

This can be seen in the issue of DBR scandal. As noted by Professor Stiglitz, perhaps the DBR report scandal has arisen from geopolitical machinations. Functioning of Fund should not be held hostage to the whims of one country.

Very important discussion, as the issue can be easily addressed. Hence need to bring issue to light.

Will focus on procyclicality, which is against the Fund’s own Articles of Agreement.

Keynes warned of the dire impact of efforts at self-sufficiency and focus on self-interest as far back as 1933.

Fund has only provided a small percentage of resources – less than 30% for developing countries during the pandemic.

Some countries in South East Asia and South Asia have been on Fund programmes for decades – as they have no other options. Imposition of Fund conditions have not enabled independence from Fund resources. Procyclical nature of surcharges is adding to the problem.

IMF research – notes that use of fiscal rules tend to support pro-cyclical policies. Surcharges will therefore make it more difficult for countries to respond to the crisis.

Fund has massively increased lending to 85 countries – however inadequate. However, surcharges on this scale will add a significant barrier to global recovery due to their pro-cyclical nature.

Pandemic costs will pale in comparison to climate crisis. The surcharge policy must go.

Speaking on a personal capacity – not necessarily position of ECLAC.

Surcharges not a good idea, not even in the Fund’s own terms.

Regressive character: tend to apply to Middle-income countries (MICs) – 14 countries subject to surcharges, all MICs. Proportional to size of quota.

Not very difficult to find a more progressive policy.

Surcharges are ‘anti-catalytic’ – initially balance of payments were due to current account problems, now, due to liberalisation, they tend to be the result of capital accounts problem. Therefore Fund used reforms and some resources as ‘catalyst’ to entice/ attract private sector finance.

However surcharges, if they worsen  states’ debt position may undermine the objective of the catalytic effort.

Argentina – the $10 billion projected in standby agreement surcharges would add substantial costs to the programme and would be a significant barrier to Fund’s catalytic efforts.

Therefore revising the policy, as G24 has demanded, would also support other financial actors as it lessens likely debt burden.

Q: What alternatives exist, given the surcharges key role in Fund financing?

Surcharges have a long history. Were streamlined after 2009, when programmes decreased – e.g. Brazil and Argentina exited. This is no longer the case. Now 85 countries with Fund programmes. This implies that the Fund has ample resources from Fund programmes.

Surcharges aside = “fund is back in business” . We don’t need to think of a full elimination of surcharges. Restoring 300% quota reform policy, e.g. could be used to eliminate some of the costs.

A temporary suspension is a matter of urgency.

Lots of revenue lost at the Fund for other reasons. Fund’s management of its own resources is appalling, for example.

Significant loss due to recent pension payment to employees. Very large costs that were accepted without comment. This from an institution that demands pension cuts from vulnerable populations.

Therefore, there are many options available. In the end the question is political.

Disagree with Martin – why should we accept any surcharges? The Fund has only used slightly over a 10% of the funds at its disposal.

Should Fund continue to pursue failed and ‘counter-cyclical’ policies, it will be back on ‘life support’ (as was the case prior to the 2008 financial crisis) as states will seek other, regional, options.

Governance issue is a long-term problem. Reference to former Chief Economist’s remarks about Fund’s accountability to US Treasury.

Regarding the IMF MD and Doing Business – negation on capital increase more likely to have been focused on China’s limited voice given its weight in the world economy. It retains 1/3 of US voting power at the Bank despite that fact that it has a larger economy in PPP.

Why did the Bank go to a law firm? Why not use experts per previous efforts. These issues demonstrate the lack of equitable governance structure.

Will focus on broader distributional and efficiency perspective.

Countries only turn to Fund in emergencies, given loss of economic oversight and severe political consequences.

Countries facing negotiating frontier with creditors. Not a zero-sum game however. Adverse effect on growth and transfers. Loss to countries will typically exceed the gains of the creditor.

IMF role has been one of credit collector – to ‘squeeze’ more from the debtor. However many times this exceeds what is sustainable -hence the relapse of countries into debt restructure after five years of restructure efforts.

Once could end in a point where both creditors and states are worst off.

Provision of IMF liquidity, coupled with conditions may have adverse counter-productive effects.

Hence the importance of Debt Sustainability Analysis – as resources paid to the Fund would detract from overall resources available to creditors and the state.

Surcharges amount to asking countries in dire straights to fund a public good. New paper discusses the conception of the Fund as a cooperative.

Current situation has turned what would have been a minor issue into a potentially major problem.

Recalls 1980s G24 paper on the financing of the Fund. Share of the Fund financing has been increasingly comprised of ‘contributions’ from non-creditor countries.

Fund is providing a global public good – ie. Those most able to contribute should do so to ensure a progressive system.

Benefits: Those who are wealthier benefit to a larger extent from a well-functioning global financial system and stability.

One could however make the case that poor countries are more likely to draw funds and should therefore should pay a greater share. However, if this were the case, governance would require change. With greater voice would come with a requirement for greater share of the resourcing.

One positive change within the Fund – closer to Keynes view – has been the allocation of SDRs (current 2.5 times the last).

US House of Representatives has passed a bill authorising $3 trillion in SDR allocation – this would allow countries to pay off IMF. Not a zero-sum game. No loans or conditions attached.

Strongly support Stiglitz –  thinks the Fund should function as a cooperative.

Concerning the SDR allocation – critical to consider discussions about rechannelling. Discussions too heavily skewed to supporting PRGT – with its conditions. Funds should be used for vaccines, pandemic responses, etc.

Surcharges can increase the costs of Fund concessional loans up to 400 basis points, which is extremely expensive. Should they lead to debt crisis and restructure, they would be counter-catalytic.

Private finance should also be opposed to the policy.

Surcharges go precisely against its mandate to support states through liquidity crisis, as it may force states to debt restructure.

The SDR allocation further illustrates the governance failure of the institution, as SDRs go largely unused.

The hijacking of global financial governance?