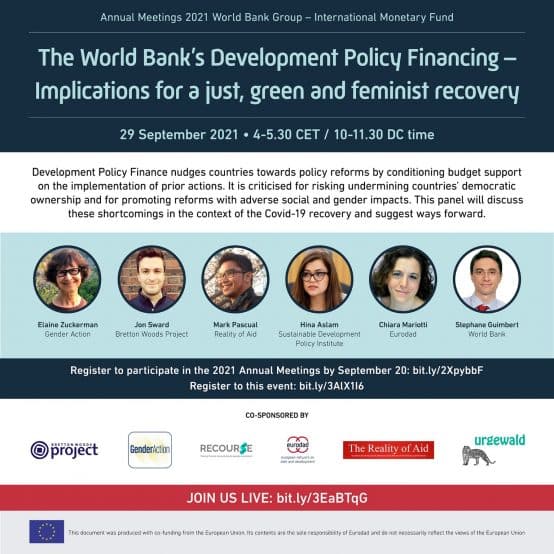 Development Policy Finance (DPF) is being widely used for purposes of Covid-19 response and recovery. By conditioning general budget support on the implementation of prior actions, DPF aims to nudge countries towards policy reforms. The nature of the instrument and the opacity around how reforms are agreed risks undermining countries’ democratic ownership in policy reforms. It also shows shortcomings in supporting a just recovery from Covid-19, by promoting reforms that can have adverse social and gender impacts. This panel will discuss these shortcomings, including drawing from country case studies, and suggest ways to deal with them.

How is the WB going to ensure that WB policy reforms around lower taxes for corporations and higher energy tariffs will not boost the profits of fossil fuels and thereby incentivize new fossil fuel investments?

Stephane, you reacted to some of the gender concerns raised, but I would stress that the BWP publication highlighted the problem with impact of WB’s general macroeconomic policies on gender. Second, if the Bank is committed to borrower-led development, why are prior actions necessary? Can anything be shared on what the Bank’s new approach will be to assessing business environments? Will it assess the DBR approach and the harm it has caused over the years?

Following from the question on why prior actions are needed – I think it is not that civil society doesn’t see that there is always going to be a dialectic. The problem is that the WB always come from the same position – one of a relationship of power where at the end of the day the Bank has the most bargaining power.

On the DBR scandal, it is really worrying. The DBR has been a pillar of how the Bank has driven and designed policy advice and conditionality. Now we are being told that the process was ridden with manipulation and conflicts of interest. We need to hear that this will be reviewed – not just the DBR but how the Bank does its research and conditionality. Considering all this, what can we expect to change in the medium term in the Bank?