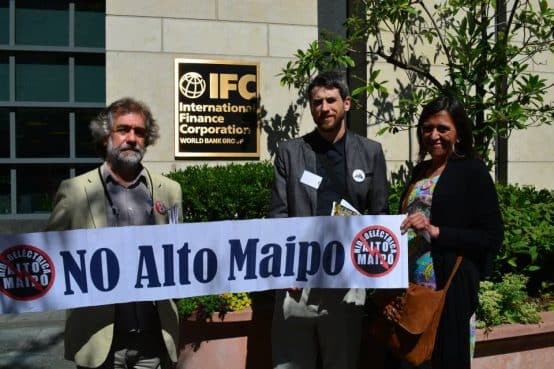 In 2008, the Chilean environmental authority accepted into its evaluation pipeline a farfetched 531 MW hydroelectric project, Alto Maipo (AM), proposed by subsidiaries of the North American company, AES Corp. The environmental impact assessment (EIA) was one of the most deficient and incomplete we have seen in decades of environmental defense work.

The ‘run-of-the-river’ project deploys installations in the headwaters of the three main sub-basins – Colorado, Yeso and Volcán – of the Maipo River watershed, to capture the waters of these tributaries, conducting them through a 75 km network of tunnels to two underground power-houses.

The international precautionary principle and the preventive principle of Chile’s environmental legislation were ignored. We find it impossible understand that the government authorised a project that degrades the headwaters of the Maipo River, putting at risk the hydrological cycle in the whole watershed, considering that it supplies drinking water to 8 million people and irrigation to 136,000 hectares, and that the region is desertifying.

Rather than relying on weak accountability mechanisms [MDBs] must develop robust due diligence processes that ensure that harms...do not occur in the first placeJuan Pablo Orrego, Ecosistemas

An opposition campaign started as soon as AM was announced (see Observer Autumn 2013). AM’s proponents claim that the opposers cannot demonstrate that AM puts at risk the water supply to Chile’s Metropolitan Region. Neither can AES prove the contrary. Thus, the need to apply the precautionary and preventive principles.

Curiously, and despite calls against its involvement, the World Bank’s private sector arm, the International Finance Corporation (IFC), approved a $150 million loan for the project in October 2013. IFC joined the Inter-American Development Bank (IDB) and US’s State Overseas Private Investment Corporation (OPIC, now the International Development Corporation), which provided $200 million and $250 million loans respectively. Ultimately, the IFC and the German bank KfW divested from the project, transferring their stakes to commercial banks.

In 2017, Ecosistemas, the Coordinadora No Alto Maipo, and other inhabitants of the basin, with the support of the US-based Center for International Environmental Law, presented complaints before the grievance mechanisms of IDB and IFC – the Independent Consultation and Investigation Mechanism (MICI) and Compliance Advisor Omnbudsman (CAO) respectively. Their belated responses were useless from the point of view of those affected by AM.

Apart from being dominated by management’s bias towards projects already approved by them, the MDBs’ complaints mechanisms are “reactive”: They accept complaints once the harms or impacts have begun occurring (see Observer Summer 2017). Both CAO and MICI took 4.5 years to produce their reports, while AM was being constructed at a feverish pace. This is unacceptable.

Affected communities and the environment urgently need proactive institutions which can prevent damage and ensure that projects considered for financing are sound. They should seek to ‘prevent rather than cure’.

In this sense, IFC management’s response to the CAO’s report is symptomatic. A huge mistake, from our point of view, since they affirm that their ‘due diligence’ prior to the approval of the credit was flawless, and repeatedly mention “experts” who were hired (at high costs, no doubt), for this purpose. If this were the case, how does one explain the litany of grave, unanticipated problems faced by the project from day one?

AM has suffered worker strikes, acute conflicts with contractors (including the renouncement of a main European contractor which sued AM in international courts), and a critical period of technical default. It has been the subject of constant financial restructuring and numerous legal and administrative demands. AM projected a selling price of electricity of $120 per MW/h; today the price is at less than $50 per MW/h.

The declared estimated project cost has more than tripled from $700 million to $2.5 billion and the construction time more than doubled, from 5 to 12 years. AM is already costing the equivalent of five natural gas combined-cycle thermal plants, with less capacity than one of them.

The influx of workers to the region has also had serious consequences. AM declared it would employ 2,050 workers, but the number has reached 5,500. MICI recognised that there was no gender perspective evaluation of the impact of this mostly male workforce invading the countryside. According to AM’s authorisation, workers were supposed to stay at contained camps, but instead they dispersed throughout local towns and villages.

Water from fractured aquifers, mixed with sediments, poured out of the tunnels under construction, contaminating surface water courses. This occurred despite technical arguments in the EIA that this wasn’t going to happen. The EIA and IFIs due diligence also failed to consider AM’s impacts on ‘recreational, touristic and landscape uses’, this being the area’s main economic asset today. This was also recognised by MICI in their report.

Despite concerns voiced by opponents from the beginning, the impacts of climate change on the viability of the project were not considered. Climate change is affecting Chile acutely. Glaciers are disappearing, and river flows have been diminishing for decades.

Now AM is seeking Chapter 11 Bankruptcy Proceeding protection in the US, declaring a debt of $2 billion, while blaming changes in Chile’s electricity market and the impact of climate change on glaciers and river flows that will diminish AM’s generation capacity.

A radical shift is required for the World Bank and other IFIs to meet their development mandates. Rather than relying on weak accountability mechanisms, they must develop robust due diligence processes that ensure that harms, such as those currently being suffered by the communities and ecosystems in the Maipo River watershed, do not occur in the first place.

Juan Pablo Orrego is President of the Chilean non-governmental organization, Ecosistemas, oriented to environmental defense – ecological and socio-cultural – both in the country and in the world, dealing with critical issues related to development, water, energy, the protection of rivers, and the environmental and social impacts of industrial and hydroelectric megaprojects.