The true cost of Doing Business

As World Bank pauses Doing Business Report, pressure mounts for it to be permanently scrapped 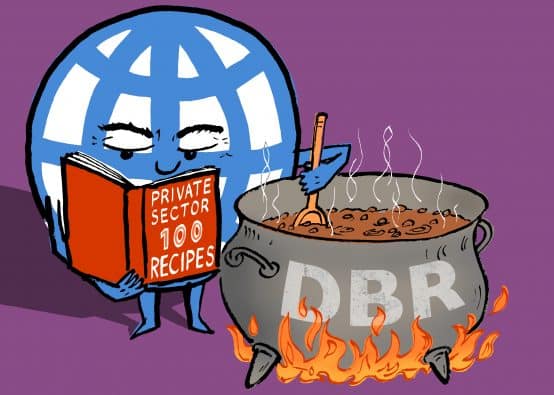 On 16 September civil society organisations had occasion for celebration, as the World Bank announced the cancellation of the Doing Business Report (DBR, see Observer Autumn 2021). The decision resulted from an independent investigation into allegations of data manipulation, at the request of the Bank’s ethics committee. The investigator’s report alleged serious ethical improprieties, including conflict of interest within the Bank’s advisory services and data manipulation of the Doing Business Rankings to appease China and other important shareholders, involving the Bank’s former President Jim Yong Kim and then World Bank CEO and current IMF Managing Director Kristalina Georgieva.

These findings gave rise to intense discussions among World Bank and IMF shareholders and within the media. It also brought to the fore the degree to which the Bank and Fund are impacted by deepening tensions between the US – and the Global North more generally – and China. After a period of ardent speculation about the implications of the investigation for the legitimacy of the Bank and Fund, and the fate of Georgieva’s tenure, the IMF executive board issued a statement affirming its support of the managing director on 11 October.

Much media coverage focused on the personal responsibility of former Bank President Kim and Georgieva, and the allegedly strained relations between Georgieva and current Bank President, David Malpass. Some presented the episode as evidence of Chinese efforts to expand its influence within international organisations. Disappointingly, very few media outlets in the Global North – while lamenting or warning of the inherent dangers of increased Chinese weight at the World Bank – took time to reference the work of Eric Toussaint of the Committee for the Abolition of Illegitimate Debt, and other academics, who have critically documented historical US hegemony within the multilateral system.

Global civil society is determined to make the Bank keep the DBR in its grave, where it can no longer do harmFrederic Mousseau, Oakland Institute

Recognising that the DBR scandal was just the “tip of the iceberg” and arguing for a comprehensive response, a 12 October open letter signed by 143 civil society organisations and individuals, called for the Bank to urgently address the structural issues revealed by the DBR scandal. The letter demanded reform of both institutions’ governance structures, including the gentleman’s agreement. It called for steps to address the internal accountability deficit and widespread perceived conflict of interest in policy lending and technical assistance, the ideological bias in policy advice and conditionality, and the unwillingness of the World Bank to engage meaningfully with the international human rights framework.

Did we say cancellation? We meant rebranding

Hopes that the World Bank and IMF would use the DBR scandal as an opportunity to address the structural shortcomings outlined in the CSO letter were short-lived. On 10 November Reuters reported that, “the World Bank plans to unveil in about two years a replacement for its flagship ‘Doing Business’ report.” The development of the new DBR will be informed by the results of an external panel review of the report commissioned by the World Bank’s Chief Economist Carmen Reinhart, and released on 20 September. The panel made several recommendations that relate to long-standing civil society criticisms of the DBR, including adopting indicators that measure the positive functions of government in promoting a good business environment; removing the country rankings; ending the potential conflict of interest created by selling consulting services to governments aimed at improving their country’s score; establishing a firewall between the DBR unit and other Bank operations; and creating a permanent external review board.

According to Reuters, Reinhart noted that, “key concepts for the new product… [include] a mandate for more transparency about the underlying methodology… and less focus on ranking countries.” Reinhart emphasised that the Bank had instituted “a lot of safeguards” over the past year, noting that, “the underlying nuts and bolts will be in the public domain.” She hoped that “credibility will follow”. Regarding credibility, a 26 October Al Jazeera article noted that a second WilmerHale report investigating “potential wrongdoing by current and former bank staff, including Georgieva,” will be released in about two months to the Bank’s human resources department and not its board.

The announcement of DBR’s rehabilitation confirmed the fears of economic justice groups and labour unions, many of whom had anticipated that the report would be refashioned without engaging with the structural concerns raised by civil society. Despite the expert panel’s sensible recommendations, the Bank has failed to address critical questions about its undemocratic governance or the DBR’s private sector-led development bias.

The Bank’s unwillingness to critically engage with the report’s premise that “what is beneficial for business is good for development”, or to assess the negative impact of DBR-driven reforms, has long been critised (see Observer Winter 2019). Unsurprisingly, the DBR cancellation announcement stressed, “the World Bank Group remains firmly committed to advancing the role of the private sector in development and providing support to governments to design the regulatory environment that supports this.”

Further evidence of the Bank’s direction was seen in Malpass’s comments during the 2021 Annual Meetings Town Hall with civil society, where he stressed that the Bank would continue to analyse and advise on country-level business reforms through its Systematic Country Diagnostic. Likewise, the Bank’s 2021 Development Policy Financing (DPF) retrospective notes, “By fostering an environment more conducive to private sector development, DPFs play an essential role in mobilizing private capital and supporting private sector led growth in client countries, especially critical in a context of tight fiscal space.”

Civil society, labour unions and social movements fear that the focus on tightening fiscal space and related allusions to the expected austerity wave (see Observer Winter 2021), will lead to a further push for the privatisation of social services and development more generally even as the global impacts of the pandemic persist. Continued IMF-mandated austerity was strongly opposed by over 500 organisations and individuals who signed an open letter to Georgieva in advance of the 2020 Annual Meetings (see Dispatch Annuals 2020).

The Bank’s planned revival of the DBR is consistent with a wider trend: Rather than critically engaging with fundamental structural criticisms about its market-solutions approach, it is merely redeploying it under a more financialised incarnation (see Observer Spring 2020). This was also the case with the Bank’s ‘cascade’ approach (see Observer Summer 2017), since renamed Maximizing Finance for Development (see Observer Spring 2020), and now integrated into the institution’s Green, Resilient and Inclusive Development (GRID) approach (see Dispatch Annuals 2021).

The DBR and other World Bank-devised frameworks can be linked to a phenomenon identified by Brazilian political economist Lena Lavinas as the collaterateralisation of social policy. She observed that “credit and debt, along with new financial devices, are becoming the cornerstones of what used to be social protection systems.” These erode state capacity, relegating its function to a what Bristol-based economist Daniela Gabor calls the “de-risking state” (see Observer Winter 2017-2018). According to Ohio State University’s Professor Linda Labao’s 2018 article, the shrinking of the state has resulted in the restructuring of the social contract between governments, citizens and the private sector, which has, “led to shifts in state capacity and policy orientation that leave populations bereft of needed public services, increased inequality across geographic areas and sociodemographic groups, and political effects such as the growth of right-wing populism.”

University of Johannesburg sociologist Patrick Bond remarks, “What’s ultimately most important is that again and again, the Bank not only sets the stage for neoliberal coddling of corporations at policy level, in Doing Business. Just as important is the actual practice of the Bank and International Finance Corporation when ‘doing biz’… here in South Africa that includes catastrophic investments such as the Bank’s biggest-ever loan: $3.75 billion for the bribery-riddled Medupi coal-fired power plant, as well as the Marikana platinum mine and Net1. These have amounted to unpunished victim-filled crimes, egged on by a mentality fostered by Doing Business: deregulatory, profit-centric, high-carbon, extractivist and eco-catastrophic, Ponzi-scheming and profoundly anti-poor” (see Observer Spring 2019).

The over 360 organisations, trade unions and individuals who signed a March open letter calling on the Bank to discontinue the DBR (see Observer Autumn 2020, Winter 2019; Update Autumn 2013) must redouble efforts during the next two years to drive the Bank to address the iceberg concealed by the DBR scandal. As Frederic Mousseau of US-based Oakland Institute stressed, reflecting on the 2014 joint statement from 280 organisations of the Our Land Our Business Campaign, “global civil society is determined to make the Bank keep the DBR in its grave, where it can no longer do harm.”

The true cost of Doing Business

As World Bank pauses Doing Business Report, pressure mounts for it to be permanently scrapped