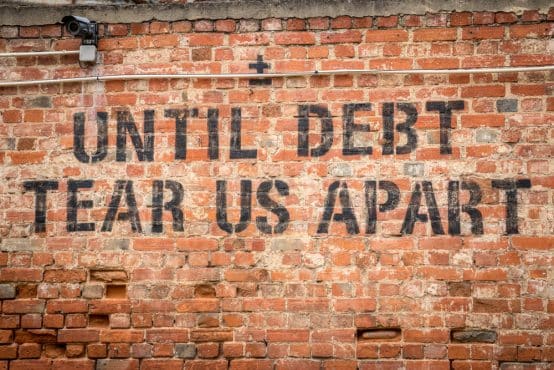 Until debt tear us apart message on a wall in Lisbon, Portugal. Credit: MonoChrome_PT/Shutterstock

The coming months will see the end of two of the main multilateral mechanisms for debt relief: The G20’s Debt Service Suspension Initiative (DSSI), which expires in December 2021, and the IMF’s Catastrophe Containment and Relief Trust (CCRT), set to expire on 10 January 2022 – although the IMF will consider its possible extension for “a final tranche of debt relief” until 13 April 2022, “subject to the availability of sufficient resources in the CCRT.”

The DSSI and CCRT serve to support countries with debt repayment issues in different ways. The DSSI suspends debt payment on bilateral public debt to G20 countries. Countries get a pause on their debt payments, but still owe the same amount which they will have to pay later. The CCRT provides countries with grants to help them make debt payments to the IMF specifically.

The DSSI, established in April 2020, has been criticised for falling short of expectations. An October study by UK-based civil society organisation (CSO) Jubilee Debt Campaign (JDC) found that only a quarter of the $35 billion of debt suspension announced by the G20 was delivered. Meanwhile, private lenders were paid $14.9 billion, while suspending only 0.2 per cent of payments.

Countries facing economic hardship will resume debt payments to bilateral creditors in 2022 and continue to pay back private creditors who have escaped from any responsibilityNadia Daar, Oxfam International

The CCRT provided $850.7 million in debt service relief to 29 eligible countries in four tranches, according to the IMF’s last update, leaving out most of Latin America where only Haiti received such relief. Nadia Daar of Oxfam International said that the CCRT “was pretty much the only mechanism which effectively ‘cancelled’ some debt payments for some countries. However, it was very limited in size and scope…and ultimately, the IMF also benefitted from this scheme as CCRT grants can only be used to pay back the IMF.”

The forthcoming termination of the DSSI and the CCRT means that there will only be one active multilateral mechanism for debt support, the G20 Common Framework for Debt Treatments (see Dispatch Annuals 2020). On paper, this framework was created to deal with the more complex issue of restructuring and reducing debt burdens. However, an article by the Atlantic Council, a US-based think tank, has called it an “abject failure”, highlighting that, “Three countries—Chad, Ethiopia, and Zambia—have sought debt relief through the program, but little progress has been made.” In most cases creditors were merely encouraged to change payment terms, which JDC highlighted was, “similar to the current suspension scheme,” adding, “It mainly kicks the can down the road, creating a future debt problem” (see Observer Winter 2020). A recent study by UNDP identified 72 countries with a high degree of debt vulnerability, of which 23, holding about 65 per cent of the total debt service at risk, are not eligible for the Common Framework or the DSSI.

At this year’s IMF and World Bank Annual Meetings, the G20’s communique emphasized their belief in the Common Framework, which is worrying, given its ineffectiveness so far. The communique barely mentioned the need for the private sector to engage in debt cancellation, restricting itself to supporting “early engagement of borrower countries and private creditors in the Common Framework.”

Acknowledging some of these concerns, in a recent blog, IMF Managing Director Kristalina Georgieva and Director of the Strategy, Policy, and Review Department Ceyla Pazarbasioglu, stated, “With policy space tightening for highly indebted countries, the [Common Framework] can and must deliver more quickly,” adding that “It is also critical that private sector creditors implement debt relief on comparable terms.”

CSOs are demanding that private creditors “cancel the debt for low- and middle-income countries that request it to help them respond and recover from the pandemic, and to play full part in international processes, including the G20’s Common Framework, granting requests for debt relief through this process” (see Dispatch Annuals 2021).

Daar highlighted, “The situation is extremely dire with the pandemic continuing to rage and persistent vaccine inequity. Countries facing economic hardship will resume debt payments to bilateral creditors in 2022 and continue to pay back private creditors who have escaped from any responsibility and will likely be forced into severe austerity in the coming years.”