Adding fuel to the fire: How IMF demands for austerity will drive up inequality worldwide

Austerity redux: The post-pandemic wave of budget cuts and the future of global public health

Economic stability with social instability: The IMF and austerity protests in Colombia 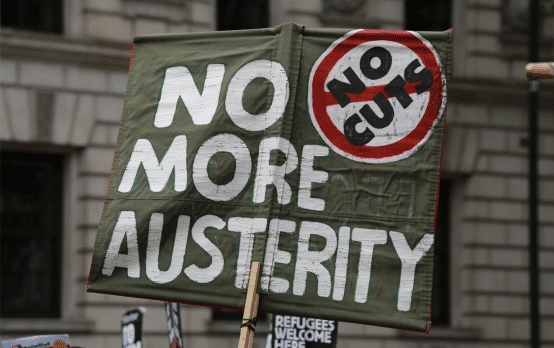 A protest march in the city of London demands an end to austerity. Credit: lonndubh/ShutterStock

In September, the Independent Evaluation Office (IEO) of the IMF published its evaluation Growth and Adjustment in IMF-Supported Programs. In the report, the IEO, whose role is to conduct evaluations of issues relevant to the Fund, assessed the extent to which IMF programmes from 2008 to 2019 have supported growth in countries, and considered if the IMF had been heavy-handed in prescribing austerity policies. Portions of the report presented damning conclusions.

The IMF lends through two systems: the General Reserve Account (GRA), which provides non-concessional loans to IMF members, and the Poverty Reduction and Growth Trust (PRGT), which provides concessional loans for low-income countries. The IEO wrote that, “GRA programs relied heavily on spending cuts to achieve adjustment; efforts to protect low-income and vulnerable groups often fell short of their goals; health and education spending did not increase significantly in either PRGT or GRA programs.” But despite such assessments, the IEO ultimately concluded that it “does not find evidence of a consistent bias towards excessive austerity”, because it considered the austerity measures imposed to not have had negative effects on growth.

The IEO report made three recommendations: (1) attention to growth implications of IMF programmes should become more thorough, systematic, and sensitive to social and distributional consequences; (2) programmes should pay greater attention to supporting growth-oriented structural reforms; and (3) the Fund should build toolkits to analyse the adjustment-growth relationship.

In her formal response, IMF Managing Director Kristalina Georgieva stated that she supported the second and third recommendations but downplayed the attention the IMF should give to growth and social-distributional impacts of its loans, arguing that “growth cannot be placed above or on par with the core objective of Fund lending of helping members resolve their balance of payments problems.” She further questioned the ability of the Fund to monitor social and distributional consequences, due to “possible budgetary implications” for the institution.

Excessive austerity past and future

In a meeting between the IEO, civil society organisations (CSOs) and academia, hosted by the Bretton Woods Project, it became clear that this ambivalent take on austerity was not shared by the economic justice community, who consistently emphasised that whether austerity is “excessive” or not does not just depend on its effect on growth. Rebecca Ray of Boston University presented research showing that IMF-imposed austerity exacerbates inequality, concluding that “even if growth outcomes are beginning to improve, it is not being reflected in living standards and wellbeing.”

Civil society and academics are raising serious concerns that the pandemic will result in a wave of IMF-promoted austerity across low- and middle-income countries. A paper from Isabel Ortiz and Matthew Cummins earlier this year warned of a “post-pandemic fiscal austerity shock… far more premature and severe than the one that followed the global financial crisis,” and called on the IMF to “stop taking decisions that affect the lives of millions of people without adequate consultation.” In October 2020, Oxfam showed that 84 per cent of IMF loans during the pandemic “encourage, and in some cases require, poor countries hard hit by the economic fallout from the pandemic to adopt more tough austerity measures in the aftermath of the health crisis.” These assessments led over 500 CSOs and academics to publish a letter calling on the IMF to stop promoting austerity.

Such warnings appear to have fallen on deaf ears. In its Regional Economic Outlook for sub-Saharan Africa in October, the IMF argued that, “Despite the spending needs associated with the pandemic, most countries will nonetheless need to undertake fiscal consolidation to contain rising debt vulnerabilities.” In November, the IMF stated its support for ambitions of the Government of Jamaica to reduce debt from 109 to 60 per cent of GDP by 2027-28, to improve “investor confidence and preservation of macroeconomic stability.”

Adding fuel to the fire: How IMF demands for austerity will drive up inequality worldwide

Austerity redux: The post-pandemic wave of budget cuts and the future of global public health

Economic stability with social instability: The IMF and austerity protests in Colombia