COP26 should distance itself from carbon shock therapy 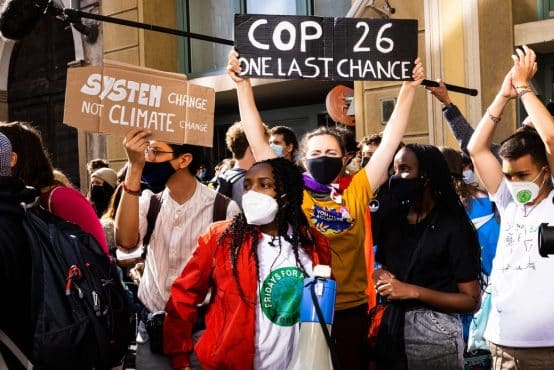 Furthermore, critics have warned the World Bank and IMF’s proposed solutions to the climate crisis – including crowding in the private sector, carbon pricing and continued austerity – risk further undermining governments’ capacity to address the crisis.

At COP26, wealthy countries failed to meet a 2009 pledge to mobilise $100 billion per year in climate finance by 2020, including through the World Bank and other multilateral development banks (MDBs), with a new roadmap released by the UK’s COP26 presidency suggesting the goal would not be met until 2023.

Discussions about crowding private investors into climate action...continued at COP26, despite the yawning disconnect between the private sector’s thirst for profits and the growing need for debt relief, grants and highly-concessional forms of climate finance

“The whole framework of [the] Paris [Agreement]… is potentially fundamentally flawed in being based around national pledges…without any financing plan,” Avinash Persaud, an advisor to Barbados Prime Minister Mia Mottley, told online news outlet Climate Home in November. “We have a $50 trillion scale of a problem and we’re using a village hall budget to try and address it. That’s not going to work.”

The lack of available climate finance is being exacerbated by ongoing debt crises in many countries, which are often aggravated by climate impacts.

New research by UK-based civil society organisation (CSO) Jubilee Debt Campaign found that 34 low-income countries spent five times more on debt repayments than on climate action over the past five years – one illustration of the opportunity cost of debt burdens. Civil society advocates have raised concerns that climate finance flows themselves are increasing debt burdens: According to Oxfam, in 2017-2018 just $12.5 billion of the $59.5 billion in climate finance provided by rich countries was in grants – compared with $24.5 billion in non-concessional loans.

In April, IMF Managing Director Kristalina Georgieva announced that the Fund would work with the World Bank to establish a climate-for-debt swaps mechanism to be launched at COP26 to ameliorate this problem. However, Reuters reported in late October that the IMF had “dropped plans to release a joint proposal with the World Bank,” and was “narrowing its push for debt-for-climate swaps to focus on countries without major debt issues.” This coincided with the G20’s failure to address the broader debt crisis at its leaders’ summit in Rome in October (see Observer Winter 2021).

With a lack of leadership from the Bank, Fund, and G20, it was left to others to raise the issue. In late October, the Vulnerable Group of Twenty (V20) – a bloc of 48 countries – called for a debt restructuring option for climate vulnerable countries to be created.

In a statement released during COP26, 243 CSOs – including Focus on the Global South and Third World Network – called for debt cancellation in recognition of the larger “climate debt” owed by the Global North to the Global South. This was echoed by 43 UK Members of Parliament in a cross-party letter sent to UK Secretary of State for the Foreign Commonwealth and Development Office, Liz Truss, during COP26, which demanded the UK support, “efforts to write off debt for countries in the global South and allow them to prioritise their response to climate breakdown.”

With rich countries unwilling to mobilise public finance at the scale required to address the climate crisis, critics are wary of what comes next. Discussions about crowding private investors into climate action dominated the World Bank and IMF Annual Meetings in October (see Dispatch Annuals 2021) and this continued at COP26, despite the yawning disconnect between the private sector’s thirst for profits and the growing need for debt relief, grants and highly-concessional forms of climate finance.

Writing in the Financial Times, Professors Daniela Gabor of UWE Bristol and Isabella Weber of University of Massachusetts Amherst warned that the IMF’s fledgling approach to climate (see Observer Autumn 2021) could play a damaging role in this regard. Of a new IMF climate strategy published in July, they noted, “In 42 pages, it mentions carbon pricing 23 times, green industrial policy once, and green public investments never.” They argued this approach – embodied by, inter alia, the IMF’s proposal for an international carbon pricing floor among large emitters – is reminiscent of the shock therapy delivered by the Fund in post-Soviet economies in the 1990s, when private investors enjoyed the spoils, often with devastating social and environmental consequences. “The price narrative sounds eerily familiar: carbon price hikes will allocate resources, real and financial, towards the right sectors,” they wrote. “Macro austerity may not be in the speech, but it is on the menu: after nearly two years of pandemic-related monetary and fiscal expansion, we are back to calls for shrinking the public purse.”

Climate-related conditionality from the IMF may form part of this agenda. Georgieva noted at COP26 that the IMF’s new Resilience and Sustainability Trust (RST) will, “provide long-term financing on concessional terms to vulnerable countries…so they can have the financial resources necessary to be strong in the face of climate shocks to come.” The RST will be financed by ‘re-channelling’ IMF Special Drawing Rights from wealthy countries (see Observer Autumn 2021; Inside the Institutions, What are Special Drawing Rights?), with Georgieva telling the Paris Peace Forum on 11 November that the aim, “is to start with about $30 billion, building it up to $50 billion and beyond.” These figures dwarf the resources available to the UNFCCC-based Green Climate Fund (see Observer Spring 2019), although it remains unclear how much RST finance will be climate-related.

The UK Executive Director to the IMF, Shona Riach, confirmed at an event on 18 November co-hosted by Boston University and Netherlands-based CSO Recourse that although the RST’s design is still being discussed, it will almost certainly disburse low-interest loans (rather than grants) and is likely to require conditionality to access finance (see Dispatch Annuals 2021).

Against this backdrop, civil society will push for the Bank and Fund’s climate work to be aligned with economic and climate justice imperatives.

COP26 should distance itself from carbon shock therapy