Statement on International Public Support for the Clean Energy Transition 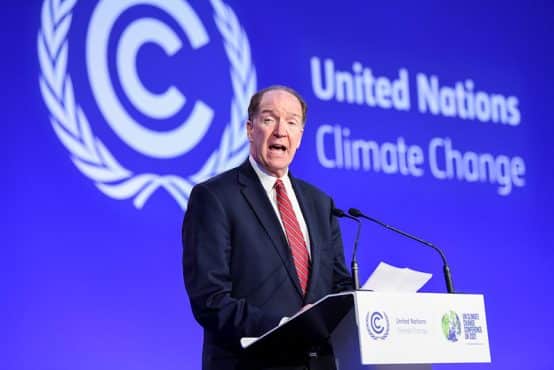 While the World Bank failed to take concrete action to introduce new restrictions on its support for fossil fuels in its Climate Change Action Plan for 2021-25 published in June (see Observer Summer 2021), a number of the Bank’s key shareholders have signalled their intent to push for further progress at the Bank and other multilateral development banks (MDBs) in 2022.

Thirty-nine countries and finance institutions signed on to a statement on International Support for the Clean Energy Transition at the United Nations Framework Convention on Climate Change’s 26th Conference of Parties (COP26) in Glasgow in November. The statement notes, “we will end new direct public support for the international unabated fossil fuel energy sector by the end of 2022, except in limited and clearly defined circumstances that are consistent with a 1.5°C warming limit and the goals of the Paris Agreement.” The commitment applies to the bilateral finance provided by signatory governments, and “will also guide [their] approach on the boards of multilateral development banks.”

Although the World Bank itself failed to sign on to the statement, a number of its large shareholders, including the US, Germany, France, the UK, Canada and Italy, did – as well as a range of borrower countries including Sri Lanka, Zambia, Mali and others. All told, signatories account for 45 per cent of the voting shares of the International Bank for Reconstruction and Development (IBRD), the Bank’s middle-income country lending arm – meaning that a significant proportion of World Bank shareholders now support ending public finance for fossil fuels, baring exceptional circumstances.

I’m compelled to single out the World Bank as an ongoing underperformerSelwin Hart, Special Adviser to the UN Secretary-General on Climate Action

The clean energy transition statement followed a disappointing joint MDBs ‘ambition statement’ that was quietly released at the start of COP26 on 1 November – and largely consisted of the multilaterals merely outlining previously-announced commitments. In the lead-up to the statement’s release, Nick Mabey, the CEO of UK-based think tank E3G, questioned whether World Bank President David Malpass was directly responsible for watering it down, noting the, “[w]ord on the street is Malpass is personally blocking more advanced MDB positions on climate” at COP26.

In a civil society reaction to the MDBs statement, published on 2 November, Bronwen Tucker of global civil society organisation Oil Change International commented, “While their Paris Alignment commitment was promising in 2017, after years of stalling the MDBs are now standing in the way of the Paris Agreement rather than aligning with it. They can change this by joining other countries and institutions in ending all fossil fuel finance, greatly increasing support for community-led energy access and just transition, and re-focusing their climate finance to serve the most vulnerable communities rather than private sector profits.”

Frustration with the MDBs’ failure to provide much semblance of united ambition at COP26 was further voiced by Selwin Hart, Special Adviser to the UN Secretary-General on Climate Action, who told the Financial Times on 4 November that multilateral development banks could not “continue to fiddle while the developing world burns,” adding, “I’m compelled to single out the World Bank as an ongoing underperformer.” Hart’s comments garnered considerable reaction, and apparently resulted in a call between Malpass and UN Secretary-General Antonio Guterres on 6 November. Still, as long as a Donald Trump-nominee with a history of climate scepticism is at its helm, it’s difficult to imagine the Bank being anything but a climate laggard.

Statement on International Public Support for the Clean Energy Transition