Recommended resources on the World Bank and IMF 2021 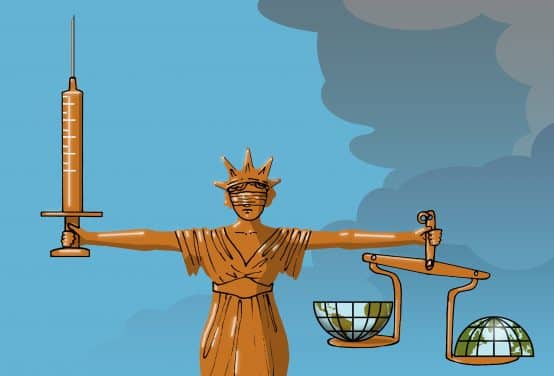 The past year was categorised by a depressingly familiar chasm between the hopeful discourse of international solidarity and multilateral cooperation and the perpetuation of unjust and inequitable international governance structures and policies. While the Bank stressed the need for a recovery based on Green, Resilient and Inclusive Development and the IMF highlighted its concerns about the divergent paths of the global recovery in 2021, both continued to support largely unreformed policies.

As was the case in 2020, 2021 was shaped by the catastrophic health, social and economic impacts of the Covid-19 pandemic, which by the end of the year had claimed more than 5.3 million lives globally. It also resulted in an additional 97 million people living on less than $1.90 per day and 163 million more people living on less than $5.50 a day. Tragically, 2021 was also categorised by a depressingly familiar chasm between the hopeful discourse of international solidarity and multilateral cooperation and the perpetuation of unjust and inequitable international governance structures and policies. While the Bank stressed the need for a recovery based on Green, Resilient and Inclusive Development and the IMF highlighted its concerns about the divergent paths of the global recovery in 2021, both continued to support largely unreformed policies anchored on familiar calls for private sector-friendly reforms intended to ‘crowd-in’ private capital. The geopolitical context of the Covid-19 recovery became increasingly complicated, as the potential positive impact of a new US administration more committed to multilateralism, if not a radical reform of it, was diminished by increasing tensions between the US, China, and other G20 powers.

The year also witnessed the continued exacerbation of pre-existing inequalities, with the World Inequality Lab’s 2022 Global Inequality Report stressing that “contemporary global inequalities are close to early 20th century levels, at the peak of Western imperialism.” Refuting the private sector-led recovery policies strongly promulgated by the IMF and World Bank and many high-income countries, the report underscored that, “Income and wealth inequalities have been on the rise…since the 1980s, following…deregulation and liberalization programs…[confirming] that inequality is…a political choice.”

While the UN Conference on Trade and Development’s (UNCTAD) 2021 Trade and Development Report highlighted that the scale of government support in high-income countries in response to the pandemic “broke new ground”, it stressed that urgent reforms remain hostage to a lack of political will in these countries. This is exemplified by the World Bank, IMF and G20’s continued refusal to support the necessary structural and policy changes to enable most middle- and low-income countries to achieve a just recovery from the pandemic. This has worsened a context of increased debt crises, constrained fiscal space, tightening monetary policies in high-income countries and continued inequitable access to vaccines. Drawing disturbing parallels with the international response to the 2008 Global Financial Crisis, UNCTAD noted that promises of necessary reforms “were quickly abandoned in the face of resistance from the winners of hyperglobalization.”

Instead of re-evaluating the consequences of their orthodox policy prescriptions of austerity, privatisation and market-led reforms in the light of the overwhelming evidence that they contributed to worsening the health and social consequences of the pandemic, the Bank and Fund did little to change course.

A historic $650 billion allocation of the IMF’s Special Drawing Rights and discussions of rechannelling of much-needed resources to middle- and low-income countries struggling to respond to the pandemic and debt burdens also took place last year. That said, the allocation fell well short of the $3 trillion called for by civil society and also failed to meet other demands, such as conditionality- and debt-free arrangements.

One of the year’s few bright spots was the World Bank’s announcement that it would discontinue its much-criticised Doing Business Report, although the Bank announced it would relaunch a revised version of the report in about two years. This was unsurprising, as World Bank President David Malpass made clear the Bank’s intention to continue its push for market-friendly reforms in line with its Maximizing Finance for Development approach despite the pandemic.

The lack of progress on two of the central pillars required for an equitable, just, and green recovery were telling and devastating. On debt, the much-criticised G20 Debt Service Suspension Initiative and Common Framework failed to address the problems faced by middle- and low-income countries, while continuing to privilege private sector creditors, who extracted urgently needed pandemic response resources from dwindling state budgets. The international community and private sector creditors continued to steadfastly refuse to consider long-standing civil society demands for a human rights-based reform to the international debt architecture inclusive of an independent debt workout mechanism.

On vaccination, alarmingly, the Bank and Fund continued to ignore calls from civil society and many of their shareholders to support the intellectual property waiver for the production of Covid-19 vaccines. As the People’s Vaccine alliance stressed, the waiver is essential to address what African leaders call ‘vaccine apartheid’ where high- and upper-middle-income countries continue to absorb the vast majority of vaccines produced globally, as low-income country populations remain largely unprotected.

While the IMF highlighted the equitable nature of its Covid-19 response, it nonetheless continued to profit from surcharges, which UN human rights experts warned violate international human rights laws, and are projected to cost countries most in need of IMF support up to $4 billion by the end of 2022.

The year also witnessed the early replenishment of the International Development Association’s (IDA), the World Bank’s concessional lending arm, 20th round of funding, totalling $93 billion. While additional concessional resources for low-income countries were welcome, civil society remained critical of the process and significant portions of IDA’s programme, including the Private Sector Window, and doubts about whether it is structured to suppor equitable development.

G20 independent review calls for increased lending by multilateral development banks to address multiple crises, but lack of reform in World Bank crises response framework raises concerns about how it would use additional resources.

As economic conditions worsen and the Fund's legitimacy comes under increasing pressure, IMF leaders gathering for the Annual Meetings must make progress on ongoing review of IMF quotas and agree a more equitable formula and distribution of voting power.

As geopolitical tensions rise amidst worsening global economic conditions, civil society demands the democratisation of a world economic order away from the established Global North and elite capitalist hegemony.

While the Bank stressed the need for a recovery based on Green, Resilient and Inclusive Development and the IMF highlighted its concerns about the divergent paths of the global recovery in 2021, both continued to support largely unreformed policies.

Doing Business scandal, likely conditions attached to SDR rechannelling and lack of Bank and Fund support for an intellectual property waiver for vaccines highlight links between undemocratic governance structures at Bank and Fund and the uneven recovery from the pandemic.

Recommended resources on the World Bank and IMF 2021