From the Arab revolutions to global austerity trends 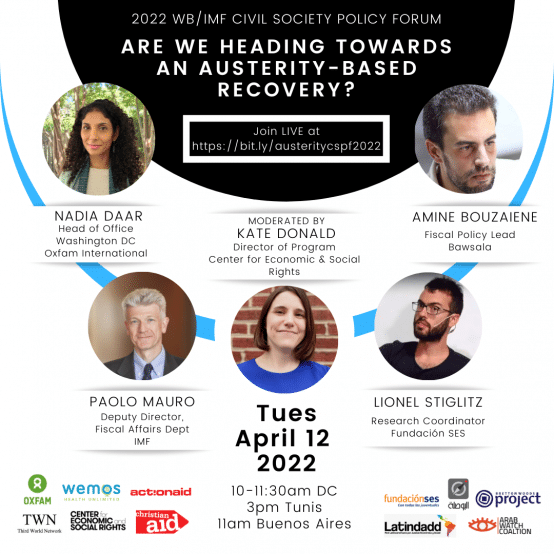 Notes from Civil Society Policy Forum event on April 13, 2022, which explored how the trend of austerity is materializing across the world and present alternatives for a fair recovery with a focus on taxing wealth.

Summary: In the third year of the pandemic, we are seeing a sudden and worrying roll back of crucial fiscal support that earlier helped cushion the devastating impact of the crisis with countries now adopting austerity measures before the pandemic is even over. Through its advice and conditionality, new evidence reveals the IMF is encouraging many countries down this path which consistently undermines the lives, rights and wellbeing of those most vulnerable. From Tunisia to Argentina, from Zambia to Nigeria, this panel will explore how the trend of austerity is materializing across the world and present alternatives for a fair recovery with a focus on taxing wealth.

A video recording of the event can be found here.

We will now look at two specific country contexts with recent experiences: Argentina and Tunisia.

Kate Donald: Think this is an extreme example of what we have seen in many countries – loopholes, VAT, cuts for corporations and wealthy individuals. Will hand over now to Paulo to respond to these concerns.

Lionel Stiglitz: Out self-financing ability is compromised because we lost 100bn dollars to capital flight with support of IMF. So this ability is not endogenous, it has links to international financial system.

In my presentation I asked about IMF’s view on taxing offshore wealth – would appreciate a response by the IMF representative.

Nadia Daar: Wanted to respond on that austerity is loaded and the need to look at numbers. The big concern is exactly about the figures, required fiscal consolidation targets and types of measures countries need to adopt to meet them. Those are specific policies we’re worries about. You said this was crucial at the beginning of the pandemic, now the situation has practically worsened, but then we’re back to these fiscal consolidation targets. How is the IMF advising specifically to avert the crises we are facing today?

Amine Bouzaiene: Want to make some suggestions, would like to hear from Paulo which ones are good or bad. Tax progressivity with higher rate for higher incomes. Corporate income tax. Tax extraordinary corporate profits of companies that got richer in the past 2 years. Streamlining tax benefits to only maintain those with real measured impact. Hiring 500 tax comptrollers.

Paolo Mauro: The kind of things you mentioned (Amine) would be the options we would look at – types of taxes, tax administration, VAT vs. other taxes, tax evasion. Let me defend VAT – it is a fantastic way of collecting revenues in an efficient way that can be redeployed for progressive measures. Personal income tax is progressive in all countries – my own recommendation is not to have a flat rate, but a staggered system. This is a political choice that rests with government, as mission chief don’t want to dictate political choices of the country. Property taxes important. Avoiding tax evasion is part of IMF’s technical advice. Important that people can’t park their money in other countries, exchange of information is something we are encouraging. Recruiting more administrators is a great idea.

On the financing side – trying to replenish CCRT and PRGT, and are exploring SDR channeling and RST.

Kate Donald: Efficiency is not the only principle for tax collection – for many years, feminist economists have made the point that there are distributional and equity impacts as well. If you don’t collect taxes progressively, you undermine your own goals of progressive spending.

Would like to hear more about how findings from IMF’s own research & analysis translates into programs – have seen some very good research come out, but then it is not implemented in practice.

We use the term austerity because it is loaded – it is a very political policy. It creates winners and losers. Even if we agree we don’t want debt to explode and understand at some point cuts need to be made, it should not happen now when we are still in the middle of the crisis.

Paolo Mauro: Mastering domestic resources is crucial. Trading off this against cost of debt crisis and inflation. We are trying our best to include in programs and surveillance the analysis of flagship publications. Have a strong internal review process. Where the rubber hits the road is financing – have to make trade-offs. Can do the analysis on all these topics but at the end of the day, budget is the constraint.

Amine Bouzaiene: VAT can be efficient, but it is regressive, and when we look at its history, the use of this has been compensated with cuts to other taxes. We have the capacity to implement progressive taxes, will allow us to mobilize more resources. It’s not just up to us. There is high external debt, it is suffocating and there is no exit. Need to put this on the table and need to talk about a debt moratorium.

From the Arab revolutions to global austerity trends