Argentina and the IMF: the looming clash over its $57bn bailout

IMF says Argentina bailout programme was ‘too fragile’ to succeed 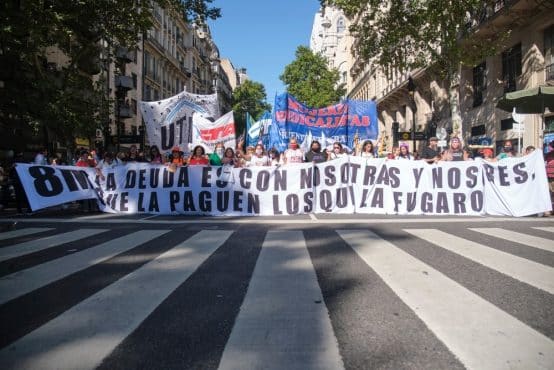 Protesters hold a banner reading: "The debt is with us, let those whose capital fled pay." Credit: Carolina Jaramillo/ Shutterstock

As reported by Al Jazeera, the Argentine Senate voted on 18 March to proceed with a 30-month Extended Fund Facility (EFF) arrangement of $45 billion or 1000 percent of the country’s quota. The programme was agreed days ahead of a payment of $2.8 billion to the IMF as part of a record-breaking $57.1 billion loan agreed in 2018 (see Observer Winter 2018, Summer 2018). The Fund’s executive board approved the programme on 25 March, paving the way for the initial disbursement of $9.7 billion. However, echoing concerns about the 2018 programme, a 25 March IMF press release, stressed that, “Risks to the program are exceptionally high and spillovers from the war in Ukraine are already materializing…early program recalibration, including the identification and adoption of appropriate measures…will be critical to achieve the program’s objectives.” The agreement enables Argentina to repay the previous 2018 Stand-by-Agreement (SBA), which has repayments of $39 billion due in 2022-2023, and to strengthen its international reserves.

On 10 March a group of more than 120 people, filed a collective action suit challenging the validity and constitutionality of the SBA in a Federal Court, arguing that the lack of legislative approval “as established by the Constitution…violates the right [to participation] recognised in the Universal Declaration of Human Rights in its art. 21, the International Covenant on Civil and Political Rights in its art. 25 and the American Convention on Human Rights in its art. 23.” On 29 March senators from Frente de Todos (Everyone’s Front) proposed legislation to create a national fund, projected to amount to as much as $20 billion, to pay the IMF with funds recovered from those who have undeclared assets overseas and contributed to capital flight during the 2018 SBA.

A 11 March blog by the Movement for the Suspension and Investigation of the Debt website reported on protests of tens of thousands throughout the country against the new agreement. The Movement maintains that the 2018 debt to the Fund should not be paid, as it is illegitimate. It emphasises that the Fund’s evaluation of the country’s compliance with the agreement every three months implies, “increases in taxes and inflation, labour precarisation, increased and damaging extractionism, loss of sovereignty…and worsening…access to basic human rights.”

Debt [to the Fund] is odious, contracted against the interest of the nation and its citizens.Eric Toussaint, Committee for the Abolition of Illegitimate Debt

Speaking at a 14 March public hearing organised by the Frente de Izquierda (Front of the Left) parliamentary bench, Nora Cortiñas, one of Argentina’s Mothers of May Square founders, described the agreement as “fraudulent and odious, contracted against the interest of the nation and its citizens.” She called on legislators to “vote against the new loan so as not to betray the people.”

In a 7 March article posted on Social Science Research Network, Karina Patricio Ferreira Lima of University of Leeds (UK) and Chris Marsh of Exante Data argued that, “the 2018 SBA violated the core purposes of the IMF as per its Articles of Agreement and, therefore, constitutes an ultra vires act,” making it invalid and void. The violations included failure to ensure adequate safeguards for the provision of the Fund’s general resources in light of unsustainable debt and inaction on capital controls, for example, to ensure the programme did not contribute to an extension and severity of Argentina’s balance of payments crisis. The analysis is supported by a December 2021 North American Congress on Latin America article outlining the programme’s numerous irregularities and political motivations.

The IMF’s own analysis in its Ex-post Evaluation (EPE) of the 2018 SBA notes that, “The program was well understood to be high-risk—from the beginning, public debt was assessed to be ‘sustainable but not with high probability.’…[the] reintroduction of capital flow management measures, could have delivered a more robust program.” The Argentine Government’s official response to the EPE stressed that, “the discrepancy between the technical views of the staff and the decisions made by the IMF reinforce the view that the program constituted…a loan that meant to support the electoral chances of the incumbent Administration.” This interpretation is supported by a December 2021 Forbes article referencing remarks by former US IMF Executive Director Mauricio Claver-Carone that, “Argentina, under Macri, was seen as a key ally of the United States…A return of Peronism…would lead to an erosion of support for US interests in the region.”

In response to the approval in the Congress on 11 March, several deputies from the government coalition who voted against the motion produced a document detailing the damaging legacy of the Fund in the country, noting the positive trends in employment, poverty and inequality during the Fund’s absence in the period after Argentina’s default of 2001. It criticised the IMF for, “developing a programme [in 2018] plagued by ‘irregularities’”, which “were not only due to the excess of the quota that determines the maximum amount of financing that the country can obtain from the IMF (around 18 billion dollars) but also to the fact that this credit was used to finance capital flight abroad.” The document’s authors stressed that the Agreement “does not” guarantee “the sustainability of the debt after 2025, when…the repayment…begins.” They added that the country requires a longer repayment timeframe and decried the fact that the programme did not address the issue of the payment of surcharges, which two former UN Independent Experts on Foreign Debt have argued are contrary to international law and are widely considered counter-productive and procyclical (see Observer Spring 2022, Winter 2021).

Argentina and the IMF: the looming clash over its $57bn bailout

IMF says Argentina bailout programme was ‘too fragile’ to succeed